Two short days; Saturday and Sunday paddles this weekend. Saturday was basically from Cadboro Bay to Willows and back. The trip across Baynes to Chatham Island was pulled because the rising current in Baynes/Plumper would have made the return a bit hairy with Paula having a low-grade migraine and with Richard still learning how to handle currents. Not to mention my recent propensity for flipping while crossing eddy lines… 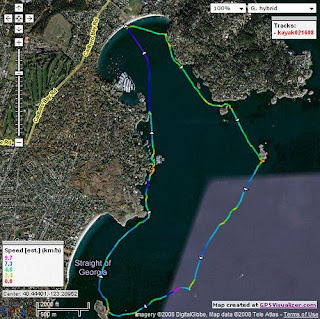 Richard brought his GPS along on the trip and was kind enough to post this track to Flickr. Basically the four of us ran out to Jemmy Jones, south to the lighthouse and then over to Mary Tod and back along the shore to Gyro Park. The trip took a little over two hours, and proved to be interesting for the varying current condition, and the number of birds we saw. There was one seal, but the rest seem to be off making little seals–and good for them.
Sunday was to be a day for newbies, but there were several bailouts before the weekend, so it ended up with being John, Louise, Paula and myself, and Pebbles and her mom Marlene. I rented a double kayak, the Eddyline Whisper CL, for a couple of hours and Marlene and I paddled it while Pebbles paddled the Pamlico. We toured the middle harbour from Ocean River to the Selkirk trestle and back. Which worked out well, as Marlene managed to hang in physically the whole way–but not much farther. The rest of the gang, including Pebbles, continued up to the Gorge-Tillicum bridge and then came back to the launch at Songhees. The sun kept coming out and warming us, but the steady wind stole most of the heat away. A slow day, but a generally enjoyable one.
The double, the Eddyline Whisper CL, is not a boat I would buy. Made too small for touring, the boat is unsuitable for the kind of paddling that I do. Even for taking a new paddler out, like I did today, I was frustrated by the footpegs/rudder controls. I’m not fond of the rotating peg rudder controls at the best of times, and these did nothing to change my mind.
So between the two paddles, that puts me at 14/100 for the year. Still pretty much on track!
Posted by Bernie at 7:25 pm