Compared to 2006, the amount of cloudy day paddles were nearly identical, but sunny paddle days were down nearly 20%. We also went out on more rainy or stormy days, and cancelled more paddles due to bad weather. Global warming wasn't making it any warmer, however climatologists' predictions that we will would be facing fiercer storms appear to be holding up, at least based on this small and subjective sample size. 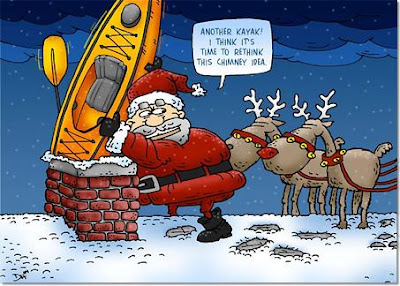 I Liked It When He Screamed Like a Little Girl 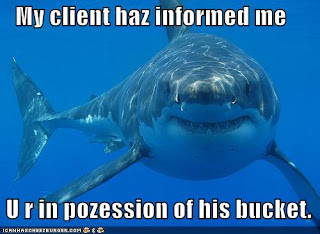 Just found this at icanhascheeseburger.com and thought: ooog. He can swim somewhere else.
Posted by Paula Johanson at 9:32 pm No comments:

Just a short paddle today--sneaking some time in between weather fronts. Made it out to the southern-most opening of Cadboro Bay, then defaulted on my original plan of going out to the Chain Islets again, and instead went northeast to jemmy Jones. then back to Flower where I met up with Paula--who was paddling her dragonfly--and back to the beach in the rain. Took as long to set up for paddling as the paddling took. but good to get out on the water again.
Posted by Bernie at 8:27 pm 1 comment:

Well, I really do have to make one. I’ve been pretty uninvolved with posting anything to the kayaking blog(s) I’m part of, so for the new year, I’m figuring to at least post a note about where I’ve gone and what I’ve done each time I’m on the water. John totaled Kayakyak the other day and noted we’d (collectively, though mostly him), had posted about 111 trips over the last two years. pretty much one paddle a week. I may not be on the water every week, but Alison and I are the only members who’ve done any expedition kayaking. I have some vague plans for the next year for some extended trips–now that I have pretty much all my gear, it makes it so much easier. A full drysuit wouldn’t be out of line but I have lots of other places to put that money. the only essential is a new sleeping pad, now that my $2 Slumberjack has finally sprung a seemingly fatal leak. So trips are in the future–if it wasn’t for the 60 – 90 kilometre winds around here, I’d already be camping on Discovery or D’Arcy Island tonight. 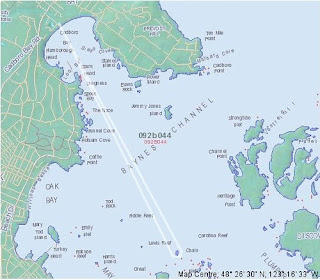 This is the path I paddled December 13th from Cadboro Bay out to the Chain Islets (or at least one of them). On the lower right is Discovery Island. While it’s in my own backyard and I’ve made multiple trips out to it to explore, I’ve never actually camped on it. D’Arcy, ~20 km north, is not much different in size, but I camped there last September.
And finally, a photo John Herbert took of me off some beach or other in the last year or so.

I converted it to b&w and simplified it a lot ’cause it looks kind of neat, and I was trying to generate some kayaking clipart.
Posted by Bernie at 12:23 pm No comments:

Taking It to The Next Level

It won't be long until kayak jumping becomes an Olympic event.

If it's Sunday, it must be time for another wind storm.
It's a pretty wild day on the water today. I drove by Willows Beach earlier and what is normally a flat and calm bay is today a raging body of water with four-foot waves crashing on the beach almost up to the road. Not even Bernie would venture out today.

Here's a cool picture. According to snopes.com, researchers from Africa Geogrphic used kayaks as a shark observation platform. 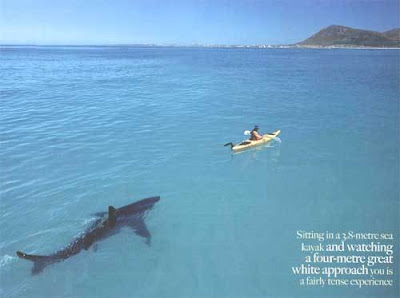 Email ThisBlogThis!Share to TwitterShare to FacebookShare to Pinterest
Labels: sharks

8:30 this morning, the waves looked quite interesting, but no, we decided to have our breakfast before paddling. But by 9:30 the waves had trebled in height. Still, not so bad, so Paula and I went back up to the house to get geared up and grab the Pamlico so I could indulge in some rough water practice. By the time we made it back to the beach, the waves had doubled again, until they were taller than me. That's a break point for me--waves over my head, maybe I shouldn't paddle. Still, walked out waist deep in them just to get a feel for them. It would have been a perfect day for rough water practice; large waves, sand beach, few rocks and an onshore wind so my bloated corpse wouldn't end up in Port Townsend. Ah well, maybe this afternoon....
Posted by Bernie at 12:22 pm No comments:

Was pretty straightforward, really. Left the beach at Cadboro Bay on a heading of 150° and returned on 330°. Ran straight out to the first of the Chain Islets, said hello to the dozen seals parked on it, and came straight back. 8.3 kilometres, average speed 3.5 knots or 6.6 km/hr. Nice steady 75 minute workout.
Perfect weather--slight breeze on the way back cooled me just enough that I could keep my hat on. Had to keep taking it off on the way out to cool off. 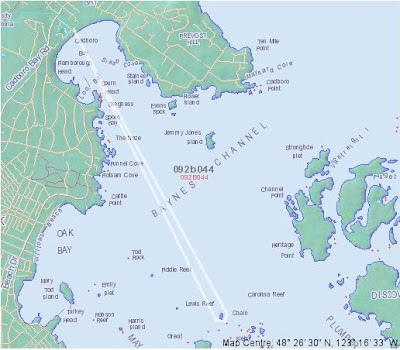 Coming back, dark was falling. the light flashing on my stern that had seemed so meaningless on the way out was pretty much necessary on the way back. And, in a big difference from the summer, I only saw one other boat. The water was quiet in pretty much every sense of the word. Even down to the motion-blurred lights reflecting on the water as I came back to the beach. Perfect paddle, really.
Posted by Bernie at 9:56 pm No comments:

According to this CBC story, a cat that had been missing from home for 26 days was spotted stranded on a cliff and rescued by a passing kayaker. The considerably thinner cat has been happily reunited with its family. 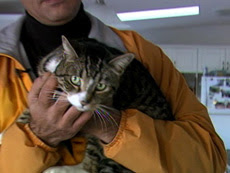 Email ThisBlogThis!Share to TwitterShare to FacebookShare to Pinterest
Labels: cats

Not that I want to turn the blog into a series of YouTube clips, but a few weeks ago Bernie noted that a couple of "crazy-ass motherfuckers" went over Alexander Falls in the NWT in a kayak.
Guess what I found?

I Want to Do This

Having set some dubious weather records this year (including the first July ever with seven straight days of rain, and the hottest day ever recorded here -- also in July) Victoria set another one yesterday.
It was the wettest day ever in Victoria -- a one-day rainfall record of 80.6 mm.
Posted by John at 12:18 pm No comments:

This is your wake-up call! Contrary to John's post below, Paula and I were on the water just after 7:00 this morning. So while John was posting that no one was paddling, we were paddling.
The water at 6:30 was beautiful--almost glassy smooth. By the time I got Paula up and we got our gear on and were down at the water, there were already some slightly larger waves and the wind had picked up. We paddled across Cadboro bay to the south and looked at the boats, as I'm still trying to figure out what to build this winter (how long, keeled or unkeeled, etc). While we were poking about, Paula had a coot surface about 30 cm (~ 1 foot) off her bow. She'd been paddling so quietly that it hadn't know she was there until it came up and there was this five metre pink shark about to grab it. It had a coot-sized freakout when it's partner came up off Paula's left side so close she could have petted it, and it was clearly asking the first one what all the noise was about. Until it too saw the pink shark. Then we had two coot-sized freakouts on our hands.
By the time we got out to the mouth of the bay, the wind was well and truly up and the waves had increased in size quite a bit. As Paula would ride over a wave, her stern and rudder (on the boat! Geez...) would come completely out of the water and have plenty of time to drip dry. It had also begun to rain, and as forward progress was pretty slow, it was a good time to turn around.
Heading back, the waves were up to a half metre in height, making paddling in a following sea a pain in the ass. My boat really likes to weathercock at these times and it takes a lot of sweeps to keep the bow headed in the right direction. Into the weather, no problem; the boat takes the waves and cheerfully soldiers on. Following sea, not so much. Paula, on the other hand, didn’t mind the following sea so much, not having to work as hard to remain properly oriented. The big waves picking her up, on the other hand, were making her a bit queasy.
So by 9:00, we were back in the house, gear away, and were eating breakfast. A nice morning paddle (okay, I might have kept going had I been alone. I was enjoying the bad weather) that didn't last too long. Contrary to published reports....
Posted by Bernie at 4:12 pm 5 comments:

If It's Snowing, It Must Be December 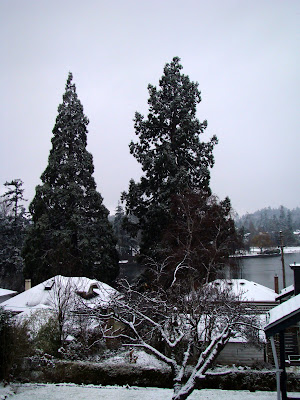 Yes Virginia, it does snow in Victoria.
This is what it looked like yesterday morning. It was all gone by mid-afternoon, but we, like most of this vast country, are in the midst of some wild winter weather. Yesterday we had colds temps hovering around zero and snow. Tomorrow and Tuesday, it's going to warm up, but the warm temps will bring strong winds and lots and lots of rain as The Pineapple Express rolls in. Today, we are on the back end of the snow system and the start of the rain system.
So needless to say, we didn't paddle this weekend. Welcome to a we(s)t coast winter.
Posted by John at 4:11 pm No comments: