How To Turn Your Kayak On A Dime...and Give Six Cents Change

Want to turn your kayak around in a hurry? In the clip embedded below, Leon Sommé of Boat Body Blade demonstrates a high speed 180-degree kayak turn called The Deep Diggity Dig. Check out the clip:

Here's another excellent historical image of boats in the Inner Harbour of Victoria BC, from the archives at the Royal British Columbia Museum. This painting dates back to 1860, featuring as its highlight the steam paddlewheeler HMS Beaver.

What I like best is seeing the variety of boats in the harbour, including steamers as well as sloops and yawls and brigantines. The little rowboat and First Nations canoe near the shore on the lower left are most appealing. It seems that these boat-users would put a sail on just about any vessel, no matter how small!

The person who made this painting in 1860 was standing on the Songhees peninsula, close to the place where we like to launch when we're paddling in the Inner Harbour. Here's a photo that John took on June 12, 2011 from just offshore. See how the land rises in both images? The church in the 1860 view was the first version of what is now Christ Church Cathedral, on Quadra Street at Rockland Ave.

Posted by Paula Johanson at 12:05 am No comments:

When Kayaking, Always Pick a Safe Place to Put-In

This is not a safe place. 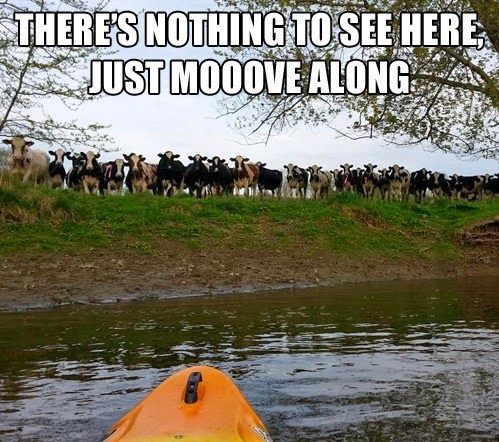 If Your Sporting Goods Store Floods...Might As Well Break Out the Kayaks 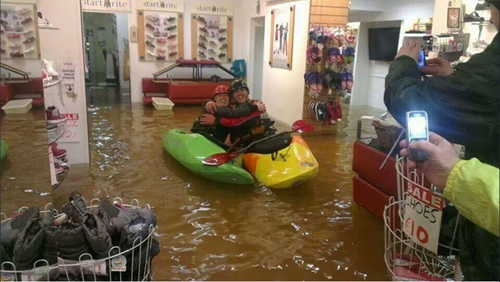 Just heard this news from the coordinator of volunteers in the Capital Regional District -- news which will be of interest for paddlers enjoying Thetis Lake:

Hello all,
I just wanted to make you aware of a cougar sighting at Thetis Lake Regional Park that we received notification about this afternoon. A cougar was spotted on Sunday, April 19 near the control dam on the Lower Thetis Lake Trail.  The incident was reported to the Conservation Officers and they have advised us that it was probably a young cougar looking for new territory and that it did not display any unusual or concerning behaviours.

As a precaution, we have placed the public advisory below on our website (yellow banner at the top of each page on our website) and have installed temporary “Cougar in Area” signs:
Cougar Sighting at Thetis LakeBC Conservation Officers are advising visitors to Thetis Lake of a cougar sighting in the park. Exercise extreme caution, keep dogs leashed and travel in pairs. Please report sightings to RAPP 1-877-952-7277.
The Conservation Officers and Regional Parks staff will be monitoring the situation over the next couple of weeks. Please use caution if hiking in the park. I will pass on any other updates as we receive them. Thanks.
Colleen
Colleen Long, Coordinator of Volunteers
Visitor Services and Community Development
CRD Regional Parks
490 Atkins Avenue
Victoria BC V9B 2Z8
T: 250.360.3329F: 250.478.5416www.crd.bc.ca/parks

Posted by Paula Johanson at 10:18 pm No comments:

Just found another website good for those times when ya gotta get yer kayaking fix in virtual fashion, rather than actually paddling. Check out the World Paddle Awards at http://www.worldpaddleawards.com/ -- this year Freya Hoffmeister is a finalist.
Posted by Paula Johanson at 12:54 am No comments:

You're Gonna Need a Bigger Rowboat

Some guys out in a rowboat got up close with a pair of orcas. Check out the video: 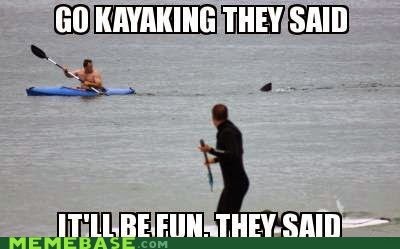 Have you got plans for this summer? There's one Canadian family making plans to move from Edmonton to Montreal -- by canoe. Benoit Gendreau-Berthiaume, Magali Moffat, and Mali are their names. Husband, wife, and five-year-old child.
This trip isn't quite as whimsical as it might seem. They are experienced paddlers. Last year, they canoed from Edmonton, Alberta to North Battleford, Saskatchewan, as a sort of training run. You can read about their summer plans on the CBC website at this link. The intrepid family is keeping a blog about their journey at PaddlingHome2015, complete with maps, bios and special events along the way -- and you can check their blog from time to time to follow their progress. I seriously recommend this blog to paddlers for many reasons, not the least of which is that the entire blog is very readable in both English and French.
Canoe trips like this used to be routine for the voyageurs and coureurs des bois.  Recent trips of this kind are not unknown. You can find a CBC story about a Calgary family who took six summers to paddle their way across Canada, one summer vacation at a time till they finished in 2013. The Cross-Canada Canoe Odyssey brought six intrepid paddlers from Vancouver, BC to the Bay of Fundy in 2011.
It does sound wonderful, to make these grand journeys. But sometimes, I'm glad just to be doing so many day paddles here in the finest place in the world for sea kayaking.
Posted by Paula Johanson at 1:08 am No comments:

Planning For Dog Rescues -- Part Three: Preparing Ahead of Time

Now's the time to come clean about something that happened on the day I was paddling in Cadboro Bay and saw a dog in distress. The whole day didn't happen as simply as I reported it on the blog in Planning For Dog Rescues -- Part One.
The rest of the story is, after paddling I called the Pound to report seeing a dog in distress at the base of a steep, rocky cliff in Cadboro Bay. As it was a Sunday and the Pound was closed, the call routed directly to the front desk of the municipal police station. Police don't usually rescue dogs, said a nice constable, which I understood -- but I had telephoned the Pound, who DO pick up dogs in distress, which the nice cop understood.
Unfortunately, the dog's location presented two problems. The first I outlined in Part One: whose job is it to rescue dogs in distress on the water or shoreline? The answer is different in every community, according to what rescue services are available. It's a good idea for dog owners to find out the local answer, and to prepare their own dog with a PFD and safety practise as I outlined in Part Two. As it was, this non-owner of dogs spent over an hour on the phone with the local police, SPCA, Fire Hall, and others who said I really ought to call the Pound. Nobody wanted me to call the Oak Bay Sea Rescue Society, who keep a suitable Zodiac boat at a nearby dock (even if they just might have wanted a practise run).
The second problem was even bigger. Nobody could understand my description of the dog's location. I had to explain the dog wasn't on the beach at Cadboro-Gyro Park, and that if a beat cop came to the beach s/he would be able to hear the dog bark a kilometre away around the curve of the bay, but not see it. As I wrote on the blog back in 2011, even a bright-coloured object is invisible against the dark rocky shore.


And how to describe that dark rocky shore? Friends understood instantly later when I said, "Between the Buddha dock and the little rock garden, where John took photos of the mother otter pushing her babies up the cliff." Unfortunately, only paddlers familiar with that shoreline from the water understood.
It didn't do any good to say "At the base of the cliff below the big grey house on Somewhere Drive, the grey house with white window trim, between the white house and the dark brown house." That's information useful to someone on that road or on the water, not a dispatcher on the phone.
Not only did the landlubbers I called have no idea where I was describing, they had no way to imagine it. It was as if anywhere not right on a road was in some mysterious foggy place.
So I am now preparing ahead of time for any shoreline incident that could require rescue of a person OR a dog. I have two ways to be prepared.
The first is to always carry my SPOT beacon. I hadn't pushed the emergency rescue button that day because it was a dog trapped at the base of the cliff, not a human. If it happens again, I'll get close and push the OK button to send myself & friends a satellite signal with my GPS location on GoogleMaps. I'll have the OK signal set to go to KayakYak website. That way, when I call the Pound, I can say: "Go online. Look up http://kayakyak.blogspot.ca . See that OK message? Click on the link. See that Google Map with a spot marked? THAT's where the dog is."
The other way I'll be prepared is to become familiar with the street addresses for every house along the shorelines where I usually paddle. The big grey house with white window trim has an exact street address that shows in GoogleMaps and in the municipality's online map on its website. That way I can say "at the waterfront backyard for 2876 Somewhere Avenue" or "on the shoreline at 2800-block of Somewhere Drive."
Posted by Paula Johanson at 12:27 am No comments: