Catch the latest YouTube video taken by Adam Chilton near Tofino, BC -- that's up-Island from us -- showing a pod of transient orcas just outside the line of surf. Also visible are many sea lions darting away from the orcas, and several surfers who look wary.

Posted by Paula Johanson at 2:03 pm No comments:

Paddle - A Long Way Around Ireland 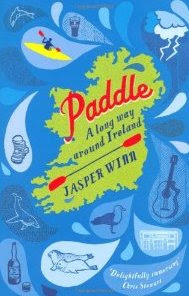 There's not a lot of the Sturm und Drang that sometimes populates kayaking books in Jasper Winn's Paddle, a memoir of his solo paddle around Ireland.
While he does describe a few hair-raising paddling incidents that threatened to end his journey prematurely, he often entertains the reader with stories of his nightly bar-hopping with the enchanting residents of coastal Ireland, a tale he spins seemingly effortlessly. A terrific book that any paddler will enjoy.

Louise and I are struggling to get into paddling after our long lay-off over the fall and winter. But one thing guaranteed to help get a person back into paddling shape is to get out and, you know, paddle. 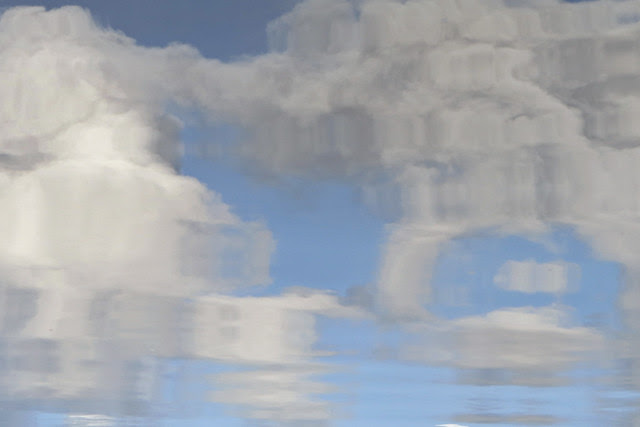 This morning, we had a bit of free time so we rolled the kayaks down the hill and put in for a quickie up The Gorge. The air still has a bit of a bit of a chill to it, and some rain and wind is due in tomorrow, but the morning sun was bright and warm as it heralded the arrival of spring. Soon. We hope.

As we headed out, this paddled by. I may be mistaken, but it sure looks like a hollowed-out log. If it isn't, it's sure built to look like one. We did not get a chance to ask the paddler about it, alas. 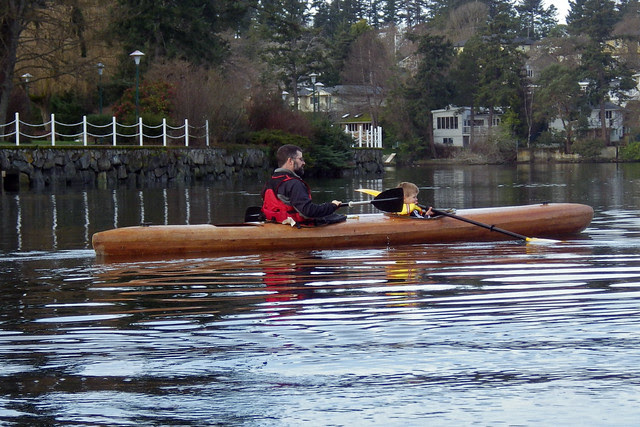 With the current not looking too bad, we decided to paddle under the Tillicum Bridge. 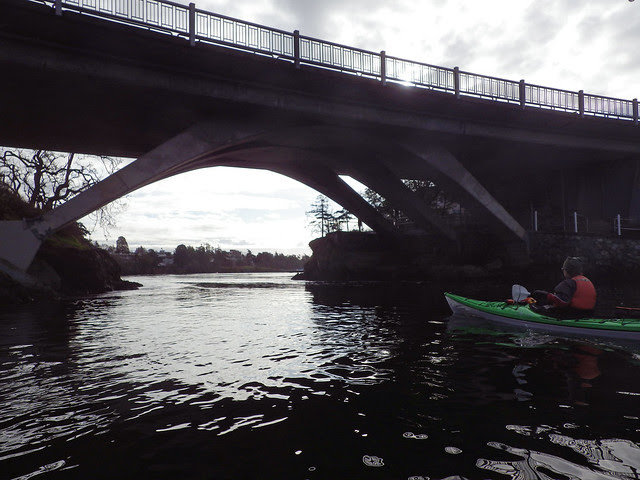 There was a slight current going under, but a few moments later when we turned to go back, the current's speed had increased substantially. It wasn't enough to be a concern or worry that we couldn't return, but it was a bit of a workout, and another reminder that conditions on the water do not remain static.

Across The Gorge from our launch point, we spotted a pair of swans hanging out with some ducks. I've been noticing this pair hanging out here for a few weeks now and I'm hoping that they're going to nest in the area. They didn't pay us much attention as we paddled by. 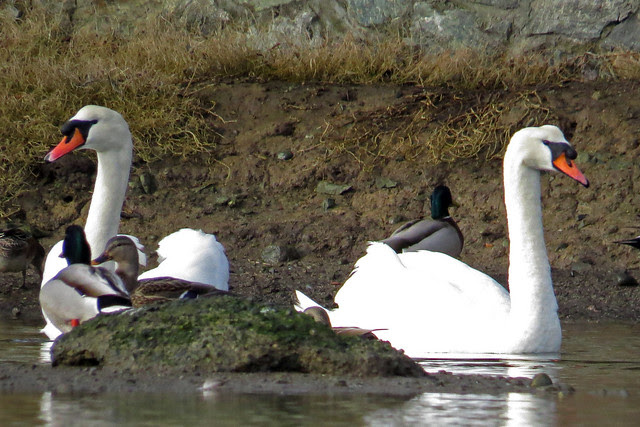 This merganser didn't pay us much attention either. 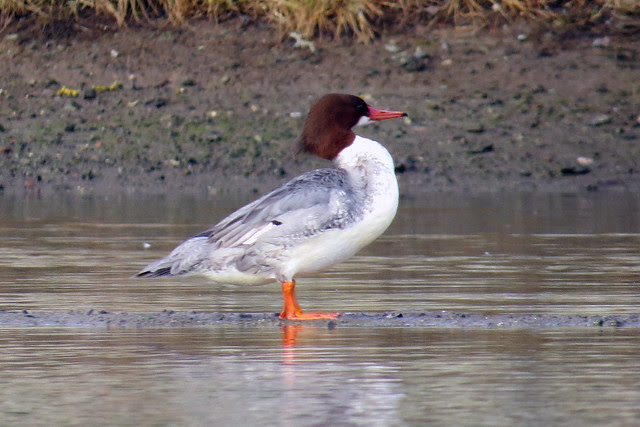 Paddling up The Gorge, we approached the bridge at Admirals Road. (The road across the bridge is Admirals Road, but the bridge is called Craigflower bridge. Go figure.) Take a good look at the bridge -- by this time next year it will be replaced by a brand new bridge. Construction is slated to start in July and in addition to causing traffic chaos in the neighbourhood, it may put a kink in any summer paddles into Portage Inlet. 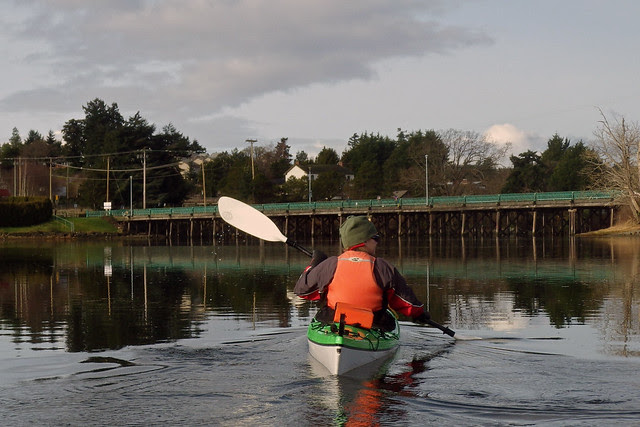 But we had no such worries today. We passed under the bridge into the inlet, avoiding the lines of the few herring fishermen aligned along the bridge's railings. 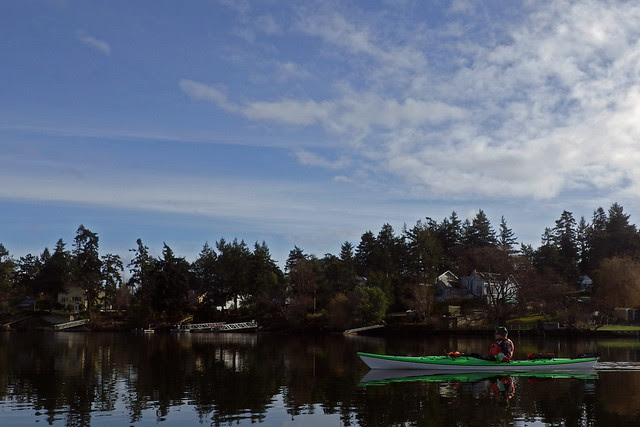 We weren't having a comfortable paddle. We'd forgotten one of our cardinal rules, which is "No eggs for breakfast on a paddling day!" The eggs, although delicious, were putting in a repeat performance. Not so yummy the second time. I was also feeling stiff and sore in the boat today. Just one of those paddles when you and the boat aren't communicating very well.
We checked out the Portage Inlet swans at their usual spot.... 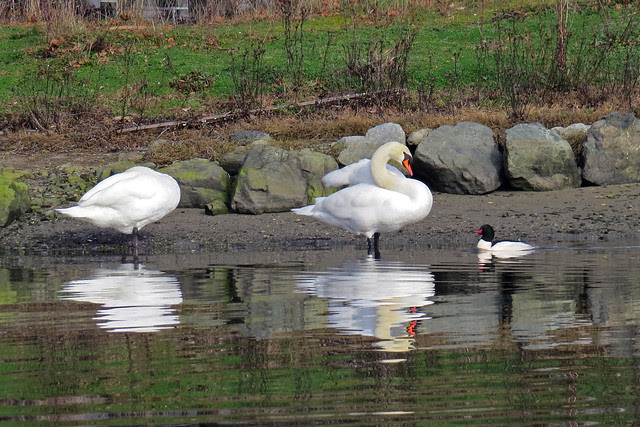 ...as well as a duck that paddled by. 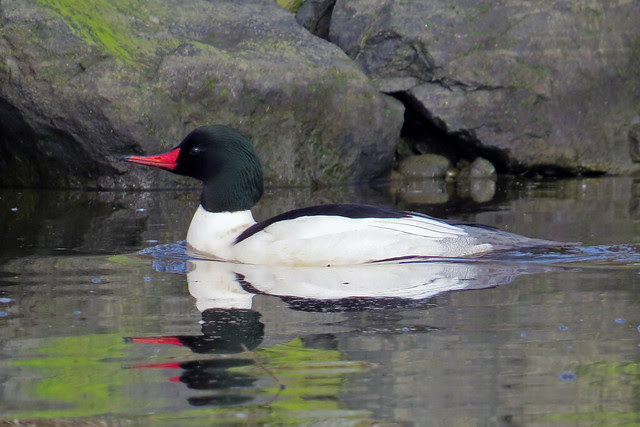 With both of us feeling a little off, we headed back to our launch point. 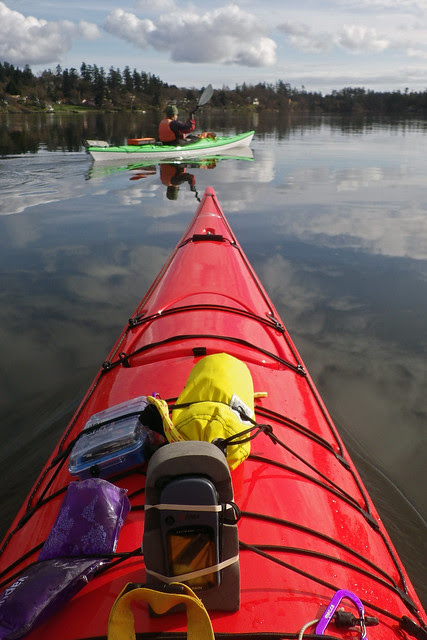 As we landed and began packing, I looked up and saw that the first two swans we had encountered at the start of our paddle had swam across The Gorge to check us out. "Turn around," I said to Louise. 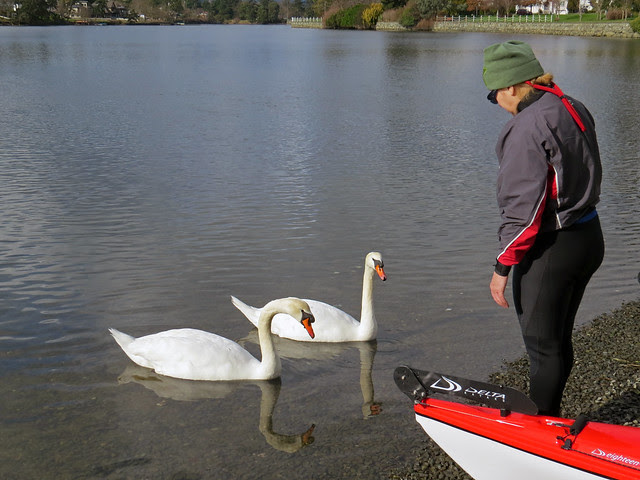 These two were clearly very tame and it seemed like they were begging us for food. One of them was making a chirping-like noise. 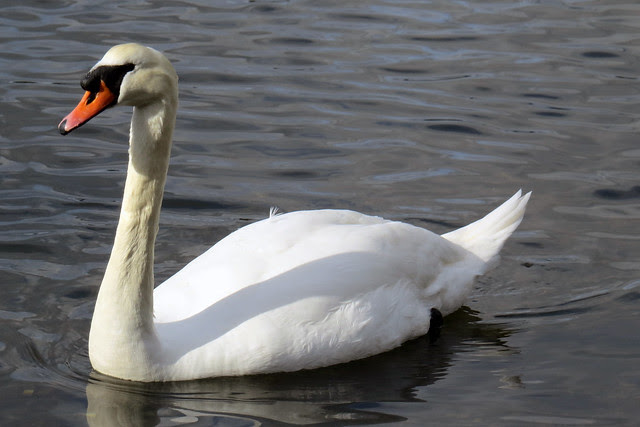 They hung around with us for a good ten minutes. Every time I grabbed my camera dry bag, they moved in closer hoping that I was digging out something for them to eat. Finally they realized we had nothing for them, and they continued on their way. And we prepared to push our kayaks up the hill. 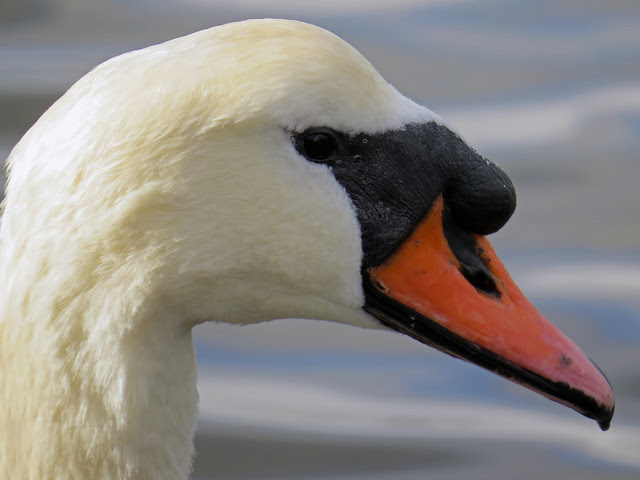 The Camera I - A Dance With Dragons

Yesterday, Louise and I headed down to Chinatown to watch the Lion Dance ring in Chinese New Year. (I've shot in Chinatown before, but it was a little darker then.) Victoria's Chinatown is the oldest in Canada, and second oldest in North America. 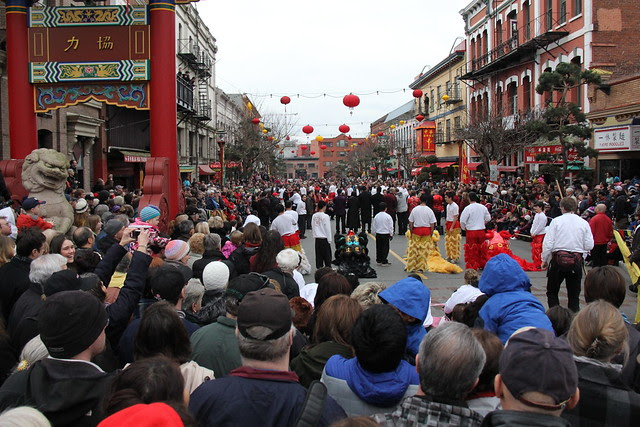 It was pretty crowded. I'm terrible at estimating crowds, but I'd have to guess there were a couple of thousand people. Fortunately, there were no injuries, except for this poor kid who was carried off by a stone lion. 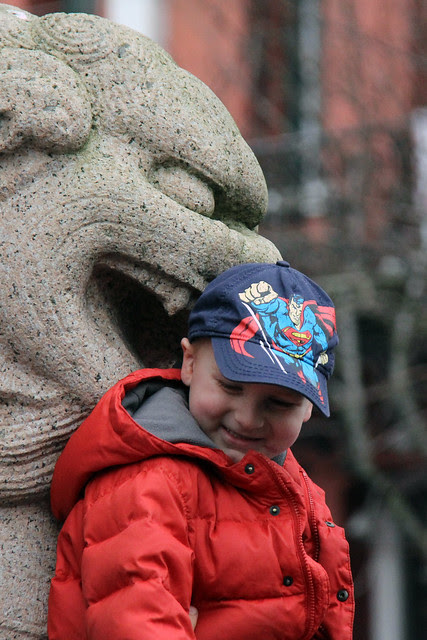 Some people would do anything to get a good view. 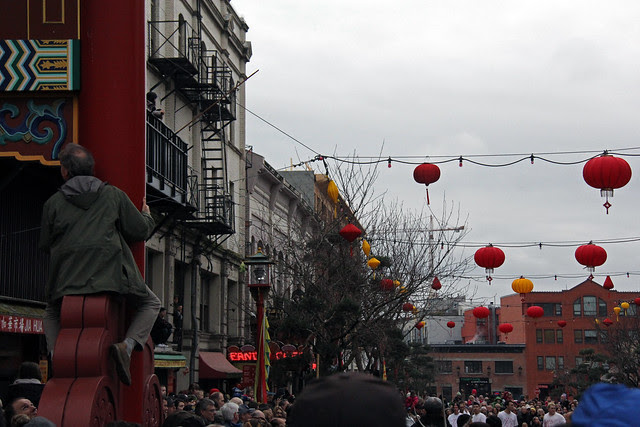 Then the lions started dancing.... 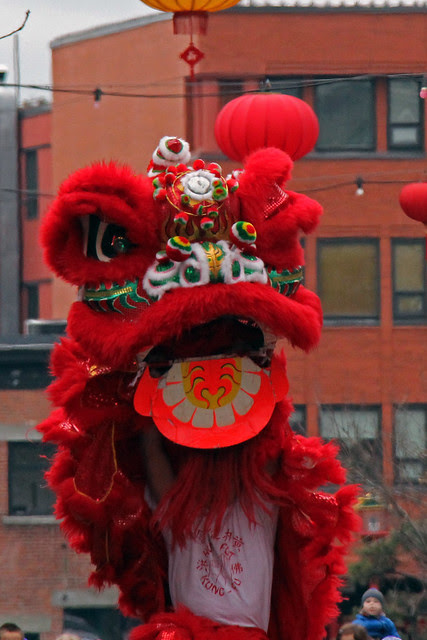 ...accompanied by a pair of dragons. 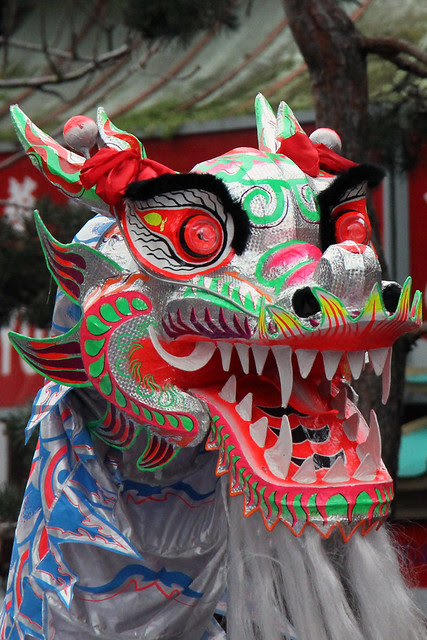 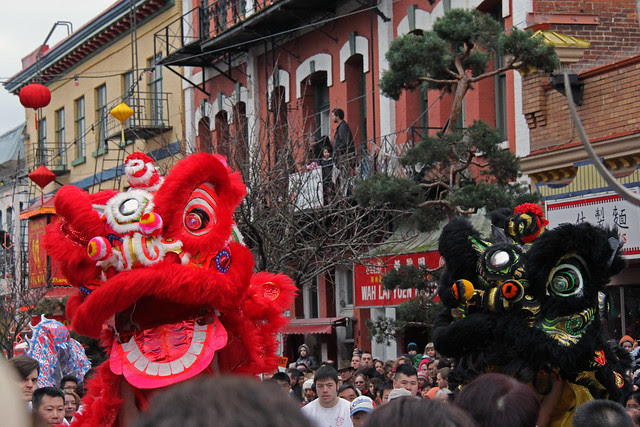 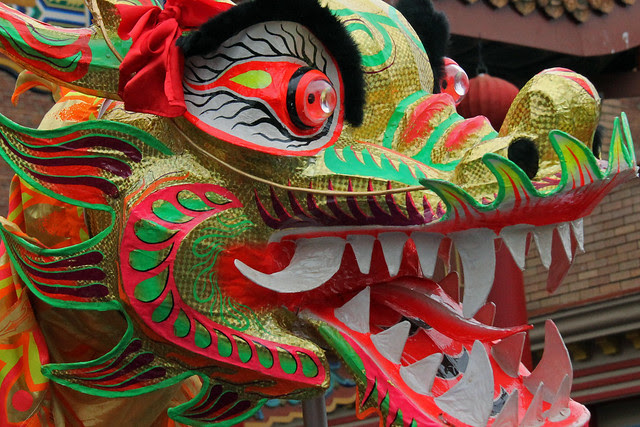 After the main ceremony concluded, Louise and I met up with a friend and ducked into QV Bakery for a quick bite, as we weren't done with the lions yet. A lion visited each building in the area and danced in the doorway. As it danced, some lettuce was offered to it. You can see a small box hanging down from the door hinge. 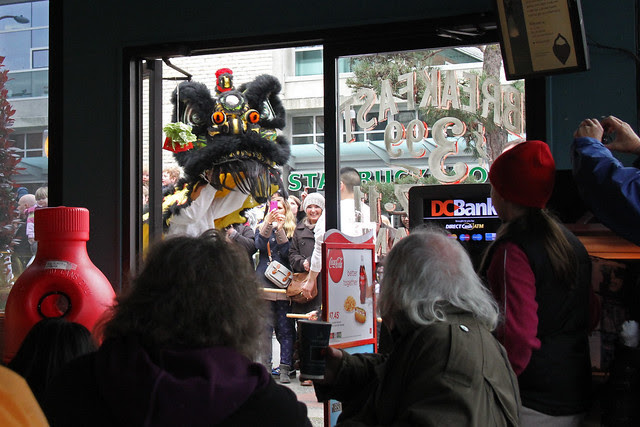 The lion would eat the lettuce, then spit it back up in the doorway, which is supposed to bring good luck. 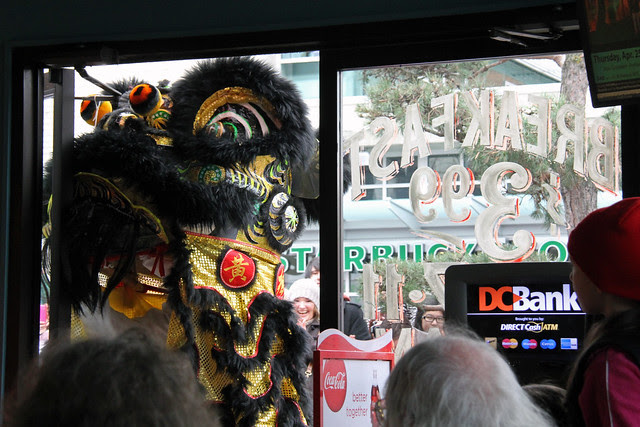 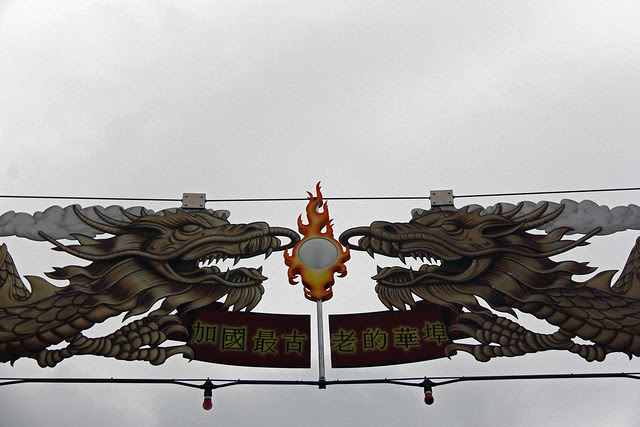 Email ThisBlogThis!Share to TwitterShare to FacebookShare to Pinterest
Labels: The Camera I

A kayaker off central Vancouver Island was rescued yesterday after getting dumped in to Johnstone Strait. He ended up in the water north of Kelsey Bay near Campbell River, and activated his SPOT satellite global positioning system about 2 PM. His distress call was relayed to local RCMP and despite the fact that he was was being swept away in strong currents, he was picked up an hour later by a local tugboat. He was suffering from mild hypothermia.
Local rescue officials give credit to the SPOT beacon for the timely rescue.
We at Kayak Yak always take our SPOTs with us when we venture out on the waves.
Posted by John at 9:59 am 3 comments:

Email ThisBlogThis!Share to TwitterShare to FacebookShare to Pinterest
Labels: rescues

What it takes to get me on the water? Not much. Not much at all. I live a few hundred steps from the high tide line of the nearest beach. One of my kayaks is an inflatable that weighs about twenty-five pounds when loaded with safety gear and paddle. And yeah, anyone who can say "one of my kayaks" has a lot of ways and reasons for getting on the water. The weather is generally good enough around here that even in winter I can get out in a kayak two or three times a week, at various times of day to boot.
What it takes to keep me off the water? A lot more.
Going to grad school full-time didn't do it -- I was getting out in a boat two or three times a week till recently. Having a bad cold or 'flu has done it in the past, for three weeks at a time, but so far this year I've dodged that bullet. Having a book or two to write as well as my assignments didn't do it.
I'm not happy to report that we now know what it takes to keep me off the water. It's an hour-long commute to the hospital to see my dad, some time spent visiting him, and the hour-long commute back. In the Neuro ward where my dad is recovering from a couple of strokes, I am The Cheerful Visitor as opposed to my mom who chivvies him to exercise and practise talking, or instead of Bernie or my brother who are The Guys Who Visit.
My kayaking is down to once a week. And yeah, I know that's all that most people with full-time jobs can do cuz they don't live at the beach. Instead of doing another lap on my outdoor treadmill (four klicks to Flower Island and back in an hour -- that's Freya's pace, y'know... tho she does it crossing the Gulf of Carpenteria in a sea kayak and I do it noodling along a rocky shore in a rec playboat) I'm doing all my reading on the bus. And knitting. Made ten pairs of fingerless mitts in the last six weeks. Whoopie ding dong.
Next week I'm going up to Cowichan Bay with Bernie and a kayak or two. Shall come back at the end of the day with new stories to tell my dad as The Cheerful Visitor, who chatters about kayaking and studying and what's in the news. Bring it on!
Posted by Paula Johanson at 3:50 pm 1 comment: