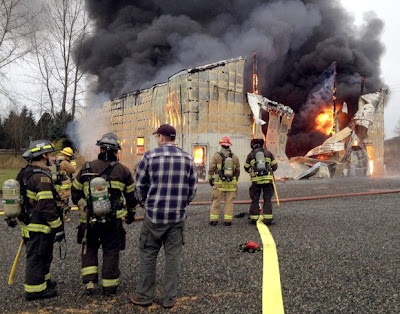 Fire destroyed the Sterling Kayaks manufacturing building in Bellingham, Washington earlier today. According to news reports, "Business owner Sterling Donalson said he was inside the building when the fire began. He said he smelled something odd and saw smoke coming from an electrical socket. As soon as he realized there were flames, he got out as quickly as he could, yelling “Fire!” in case anyone else was inside."
While a few kayaks were saved, the building and all the equipment inside, including kayak molds, were destroyed. Thankfully, they were no injuries.
Needless to say, the future of Sterling Kayaks is uncertain over the short term, but they plan to rebuild and stay in business. The Kayak Yak gang met Sterling at this year's MEC Paddlefest Victoria where we took some Sterling kayaks out for a spin. His custom-made boats are a thing of beauty and our thoughts are with him and his employees.
Posted by John at 8:12 pm 2 comments:

When I get out on my own in a kayak, I rarely take a camera. So it's great to see John's photos, like the one at the top of this page, and the many he has posted on the site. Taking a moment to enjoy his photos again is always worth it.
So if you're here, I hope you'll do that. Look at the lines of the kayaks, look at the paddlers with our grins and gear, look at the places we go -- the phenomenally beautiful places that are within minutes of our homes as well as the trips we make -- and enjoy once again what we can share of getting on the water in our small boats. And thanks again, John, for posting so many photos!

Posted by Paula Johanson at 3:24 pm No comments:

Another Reminder About Fuel Spills

The Saanich News had a big cover story this week. Heck, every paper in the local chain carried the story! Remember that fuel spill back in February that contaminated Colquitz Creek? It happened when a fuel delivery was made to the wrong address, and the wrong home's unused tank was filled with home heating oil.
So now I'm going to repeat what I said in an earlier post. If your home is heated by a furnace that uses a tank of fuel, go check the tank right now. Check if there are any visible signs of leakage. Go now. I'll wait.
I know you can't see the line that runs from the tank to the furnace, because usually that line is underground or otherwise hidden from view. But the next time the furnace is serviced, you can ask your fuel company how to check that there are no leaks from the line.
There have been other spills in Colquitz Creek, and we've written about them on the blog. There are other spills here on Vancouver Island, of home heating fuel and gasoline and camping stove fuels on boats or on shore... too many fuel spills.
Every paddler interacts with the water in a personal way. We can understand the effects of fuel spills on waterways, effects that some people don't easily understand. Put that understanding to use, paddlers! Even if Colquitz Creek isn't your home waters, it's home waters for the salmon trying to spawn there right now.
Posted by Paula Johanson at 3:00 am No comments:

Paddling with the big kids

Took a moment on the water today, and it was worth it. As I launched my little inflatable, the rising breeze was pushing in waves that made for an exciting launch. Just offshore were two young people with stand-up paddleboards. It looked like this was a good day to be on the water in either a playboat (and my boat is much like one) or an SUP. The waves were steady, and growing stronger, and rose from about eight inches in height to a foot and a half in the half hour I was out bobbing and reeling in them.
Kayak surfing is like playing with big kids instead of keeping to the little kids' end of the playground. I remember taking my sister-in-law out for her first time in a kayak, and telling her that on a calm day it was like riding a bike with your father holding the bike steady. This was more like riding your bike with the big kids... not doing bad stuff, just a little faster, a little harder, a little more challenge than you're used to.
And then back to shore, spotted with spray, as the wind grew higher and there were whitecaps all over the bay.
Later Bernie and I walked the dog to the shore and saw a flock of seagulls surfing on the strong wind blowing onshore. We could hear the theme for "Wipeout" as we watched them bob and reel.
Posted by Paula Johanson at 10:37 pm No comments: 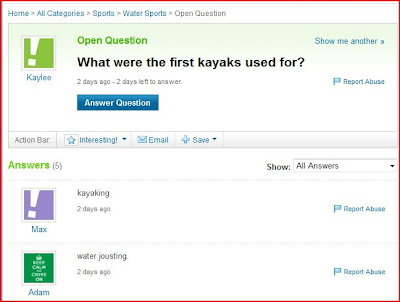 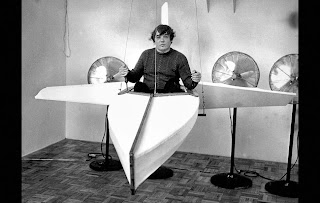 Let me direct you to this blog post from the archives of the LA Times  by Scott Harrison about a 1982  "participation art piece" by Chris Burden called "The Flying Kayak." Viewers of the piece, as shown in this photo by Mary Frampton, were allowed to ride the kayak.
Posted by John at 12:30 am No comments:

There hasn't been much in the way of paddling reports lately, as we just haven't been in the kayaking mood. One reason is that winter is coming, something we can tell by the air this weekend which has a chilly bite to it, the kind that just makes you want to hunker down in front of a fire with cats on your lap, and that the malls are filled with the annual crowded orgy of holiday consumption Christmas shoppers.
The other reason is, sadly, of a more personal nature. In mid-September, Louise's mother was diagnosed with lung cancer. The prognosis was not good, and she passed away in mid-October. Dealing with her mom's final days and now with the estate and lawyers has been taxing for Louise, and we're only just now feeling up to digging the kayaks back out.
But now, another member of our little kayaking troupe is facing a family illness as Paula's father has suffered a serious stroke. The good news is that there is "still someone home" as Paula's husband describes it, but her father cannot speak at the moment and communicating with him is a struggle for all concerned.
There's not much else to add, except that the fall of 2012 is shaping up as our "annus horribilis." Our hearts hurt, but we carry on. For what else is there to do?
Posted by John at 7:45 pm 1 comment:

Last Saturday night had a bit of excitement, here on the coast. An earthquake off the coast of Haida Gwaii meant that there was a tsunami warning put out for nearby shores, and a tsunami watch for places that are not directly at risk.
A tsunami watch is not a bad thing for we who live along the shoreline... bit like a fire drill that you know is a drill. Hang onto your patience. Assess what you would do if the situation upgraded to a warning of an actual tsunami approaching. Good to know you're prepared. Betcha my kayak would float away. When a tsunami warning comes through, though, it's time to evacuate.
The Saturday earthquake and small tsunami revealed that all is not well for the Emergency Info BC service, nor for EarthquakesCanada website, nor the American NOAA weather warnings website. As reported on The Tyee website, the tsunami warning wasn't shared as well as it should have. Social media saw people sharing the little they knew very enthusiastically.
The result of the not sharing and sharing was that people in some communities on Vancouver Island evacuated their tsunami danger zones even though soon afterward the word came through that their locations were not at risk for a dangerous wave. For most of these communities, an evacuation means gathering at a convenient building at the top of a hill (sometimes adjourning to a pub outside the tsunami danger zone). I'm glad to say that the general attitude seems to be that people would prefer to chat with their neighbours at the high school or the pub for an hour on top of the local hill, instead of waiting to see if a wave comes up the inlet.
At the Beach House, Bernie and I are located at sea level, about 300 yards/metres from the beach. Since the   landlady's house is built on wetlands, it would probably slump during an earthquake. During the latest local tremor, Bernie reported that he felt the house shimmy in a sick-making way. As well, a tsunami wouldn't have to be very high to flood our low-lying neighbourhood. The local emergency preparedness team suggests that in Victoria, people shouldn't wait for official warnings about tsunamis after earthquakes. "If it's hard to stand, go to high land," is the local rule. And yes, we keep an emergency bag packed. Even a kayak dunk bag is enough of an emergency bag to carry at a moment like that!
Posted by Paula Johanson at 2:00 am 1 comment: