On last night's Rick Mercer Report, Rick learned to kayak with Canadian Olympic kayaker Rick with Adam van Koeverden. Adam, the fastest kayaker in the world in the 500m, seems to be a good teacher, while Rick is not such a good student. And the fun really begins when Rick wants to try Adam's boat.
Check out the video embedded below: 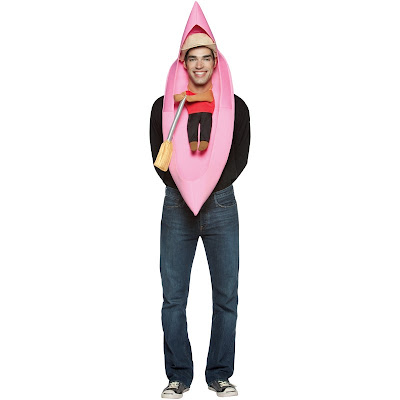 
David Johnston over at the always entertaining and informative Paddling Instructor posted this clip a little while ago, so head there for the fascinating full story.
The quick version is that in 1930 UK explorer H.G.Watkins and 13 companions were on an expedition to map the Greenland coast. Apparently they had enough time to take some kayaking lessons, and David speculates this might the earliest kayaking lesson caught on film.
Posted by John at 8:25 pm No comments: 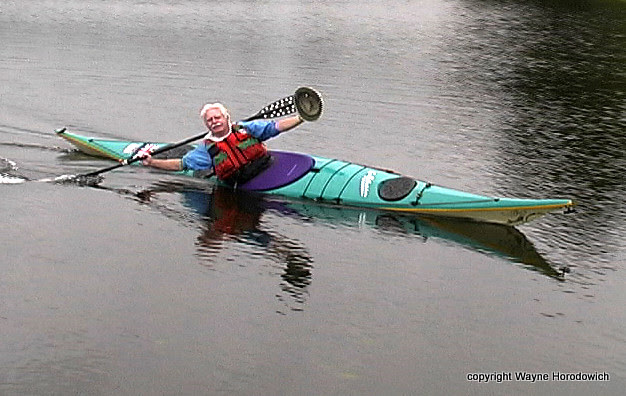 Legendary kayaker and master raconteur Derek Hutchinson passed away yesterday. Often described as the Father of Modern Sea Kayaking, he was a kayak designer, author, and star of numerous kayaking DVDs. He was part of the group that made the first kayak crossing of the North Sea (a voyage he talks about on the North Sea Crossing & Yarns From The Cockpit DVD.) He had been diagnosed with cancer at the start of this year.
The only time I ever met Derek was just over a year ago when he spoke at a SISKA event here in Victoria, recounting that perilous North Sea Crossing. He was engaging and charming. I never had the pleasure of seeing him in a kayak, but if he could paddle only half as well as he could tell stories, he was one heck of a paddler.
The late Eric Soares profiled Derek last year.
Other tributes can be found at Paddling Instructor, The Last Wilderness, the New York Times and Sea Paddler UK.

Wayne Horodowich (who took the above picture of Derek) from University of Sea Kayaking posted on his Facebook page:


I wish to thank all of you who have sent your comments to Derek. It
meant so much to him, his family and his friends. It is typical to
wonder if you have made a difference during your time on earth. The
comments you have sent are just a fraction of the number of people
Derek has touched. There is no doubt he made a huge impact during his
life.

On my just-ended visit to the West Coast, I had the good luck to catch what was probably the last tour of the season run by Salt Spring Adventure Co., and the even better luck that it was the one I would chosen, the Marine Park Tour to Wallace Island off the north side of Salt Spring Island (Parks Canada page). 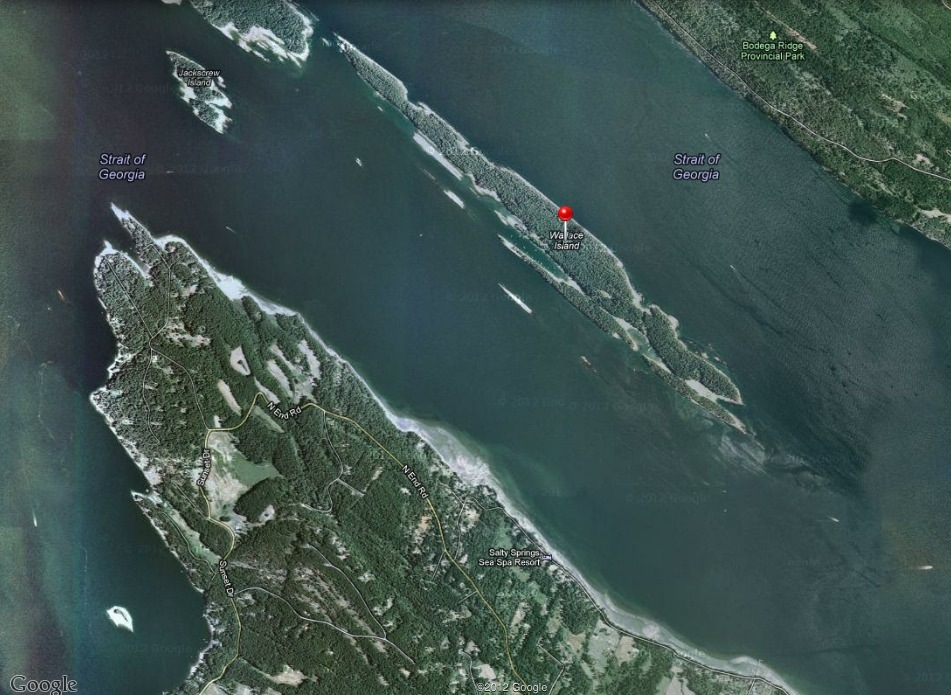 That made for an early start, since to make the 0930 muster in Ganges, we (being myself, my long-suffering parents, and a trunk full of golf clubs) had to catch the 0700 ferry from Schwartz Bay to Fulford Harbour.

It was a cool, clear morning, a calm crossing - the most exciting it got was when we rocked gently over the wake of the 0700 Tsawassan-bound ferry - and a beautiful sunrise, although the photographs of the sunrise itself are more orange than the visible hues, which were more dusky shadow and pink. We came into Fulford with the first full light of the sun, picking out the early-turning leaves. 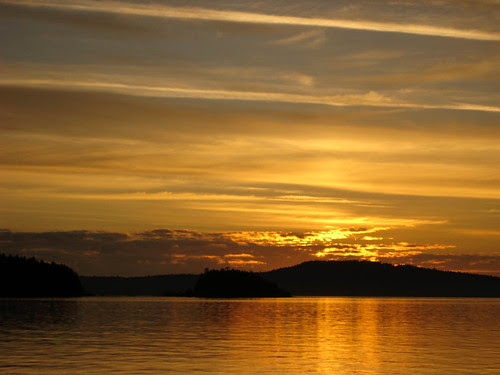 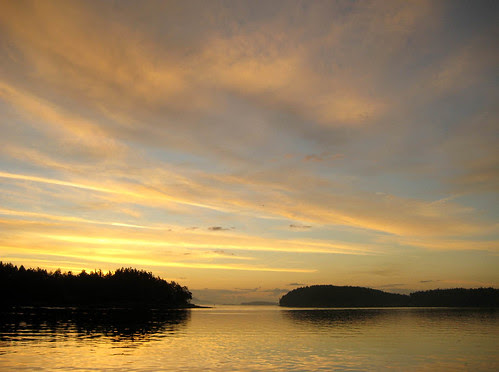 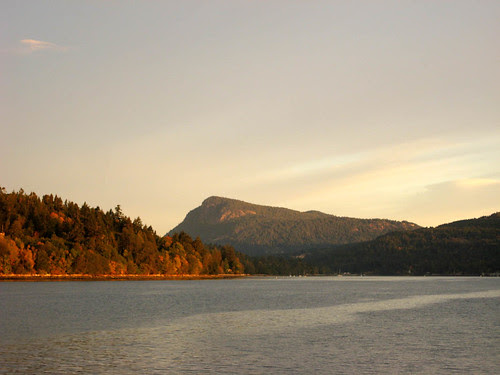 Salt Spring Island Adventure Co. is on Upper Ganges Road, and fortunately - this time - my dad did not listen to my opinion on direction. At the office, I met up with the quartet booked on the tour, and Shawn, the leader. My parents headed to the golf course, while I rode with Shawn to the launch point, which was just west of the government dock at the bottom of Fernwood Road, on a - at low tide - hard fan of exposed sand at the bottom of a ramp, so Shawn could back the kayak trailer and truck down onto the sand flat.

There was some initial uncertainty about the wind: the forecast included an initial wind-warning, with strong winds backing off to calm, and we could not tell how timely the backing off would be. We had the advantage that although the wind was still blowing, there was not a long fetch in in its direction to build a big swell. When we launched around 11 am, we had a small swell, but not enough that we needed to choose between using our hands to get the spray skirt on before the next wave crawled into the cockpit versus to prevent ourselves being blown ashore, a dilemma we all know and love from Willows Beach in the winter. I was paddling a yellow, plastic Eliza, which I figured would be a good test of whether it was a suitable boat for me. I've paddled Elizas several times on the Lachine Canal, and while the cockpit fits like a glove, it always felt a little twitchy underneath me. Which might be because I have been mostly paddling either the Kestrel or rentals - which are generally chosen to be untippable by usual exertions - although I didn't notice twitchiness when I tried out a Cetus and an Aries at the Montreal Paddlefest. Or it might be because I'm on the tall end of the range the boat was designed for.

The Eliza still felt a little twitchy. Not actually unstable, but I was aware of my core muscles hitching. The swell was about eight to ten inches and we were paddling more or less into it - we sighted on a buoy just up the coast from the southern tip of Wallace Island, expecting that we'd get blown downwind to where we wanted to be. It turned out we had the beginning of the flood tide pushing against the wind, and so wound up adjusting and heading directly for the tip, pausing to accommodate a power-boat, who, with the entire channel behind us, had to pass aft. We had launched under cloudy skies, but as we paddled, the clouds opened up above Salt Spring, and as we reached the tip of Wallace, the sun reached us. 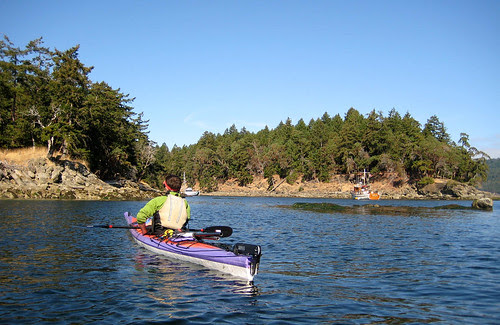 We regrouped, adjusting seats and peeling off layers, then worked our way up the west shore of the island through patches of bull kelp, hugging the rocks to stay out of the wind and spotting sunflower stars and ochre stars (the purple version) amongst the rocks, and playing spot-the-kelp-crab. We pulled out noonish at a narrow little cleft about a quarter of the way up the island . . . 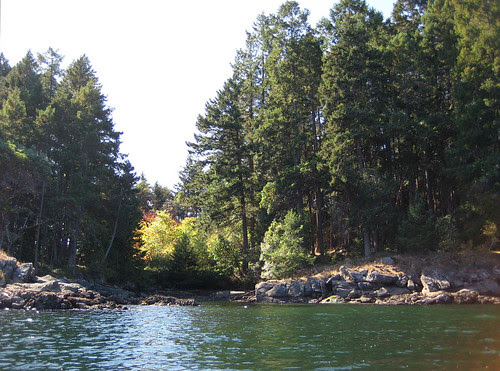 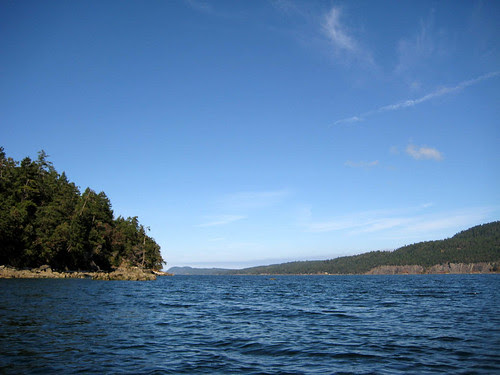 . . . opposite Conover Cove, formerly a resort, and ostensibly once developed as a retreat for Marilyn Monroe, though she died before she could visit. I didn't take a photograph of the open shelter curtained on all four sides and the interior with broken paddles and pieces of driftwood chained on wires, inscribed with the names and dates of visitors; I should have. I was too entranced by the bay itself.

We had lunch at a picnic table - very civilized - under arbutus and Douglas fir at the edge of a clearing overlooking the bay. We'd been told to pack lunches, and I had a samosa, yoghurt with blackberry sauce, haystack brownies, and Shawn fed us all sweet coconut macaroons and a peach-tasting tea. Then we portaged the very short distance across the island, and put into Conover Cove. 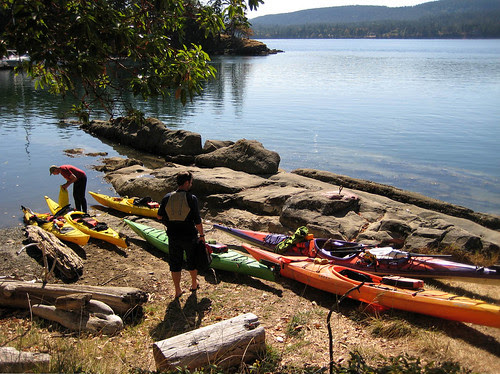 My yellow Eliza is the boat on the left. When we paddled out, we found an entirely different body of water than the one we had left, glassy smooth and gently rippled, almost windless.

From the mouth of the bay we turned north-west along the Salt Spring side of the Island, past some fascinating sandstone formations, pitted like a rock Aero bar, except with wildly varying sizes of bubbles. I have a notion - which might be based on an outdated understanding picked up during my early teenage years as a would-be geologist - that these originate when sand and small stones work their way into cracks and are swirled around, eroding pockets that are enlarged by ongoing erosion.

About half way up the island we came around a promontory and looked back down a long, narrow side pocket, I think it's called Princess Bay. I was more interested in the small islet, broken off the tip. 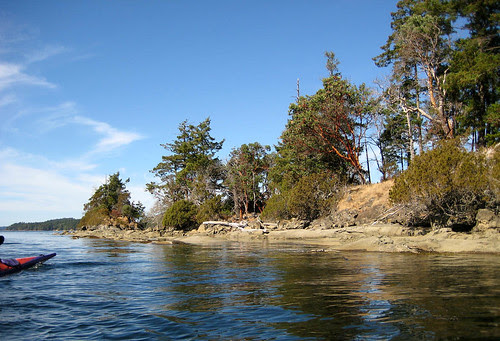 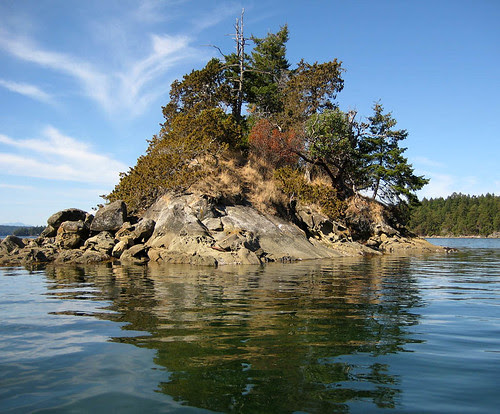 We kept going to about three quarters of the way up Wallace, where we could see the gap between the tip of Wallace and the Secretary Islands, and then swung out and around some isolated rocks and their seal colonies. Their camouflage was excellent: their round bodies just about matching the colours of the rolls of sandstone, and white patches on their heads like the patches of bird lime on the rocks. 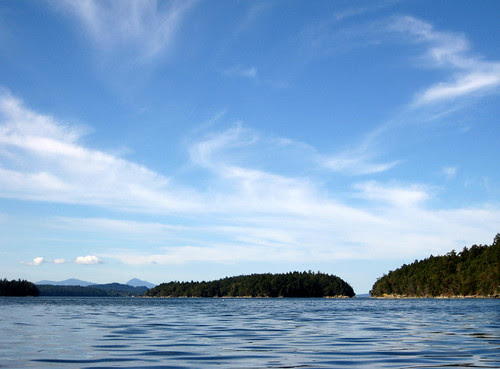 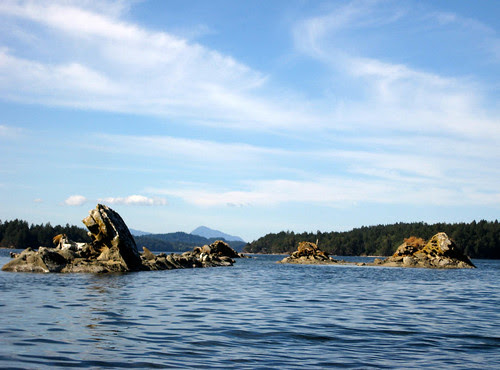 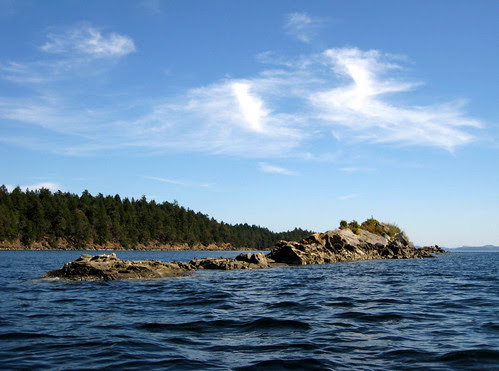 And then we angled across to the launch site, just sliding along on the glassy water. Shawn lent me his graphite paddle for a stretch, and compared with a standard paddle, it felt as though I needed to keep a hand on it to stop it drifting off on the breeze. Nice! So along with boat upgrade, there will be a paddle upgrade. The incoming tide had just about covered the original packed sand fan, but there was just enough beach left for us to land, offload, and unpack. Then the other four climbed in their car, and Shawn dropped off the kayaks at their winter rest, and I rode with him back into the office to meet my parents, who had managed 18 holes of golf on a 9 hole course. 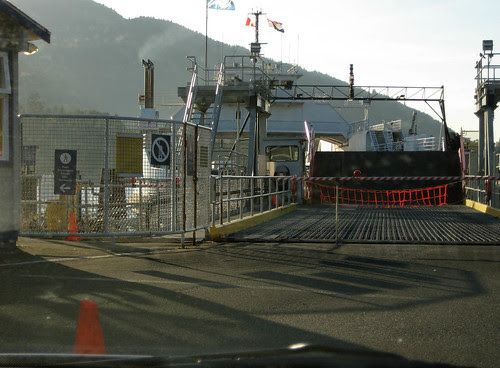 Our meal at the Rock Salt Restaurant and Cafe was - in my hungry opinion - quite adequate compensation. I had their Tuk Tuk Rice Bowl (recipe from their site): salmon in spicy tomato-coconut sauce on coconut rice, with a citrus Asian slaw, the latter delectable enough to convert me to cabbage. Desert was a dense and deadly chocolate mousse. A couple of motorcyclists preempted our first-in-line position, but we were still the first car on the 1750 ferry to Schwartz Bay. We didn't quite get to see the sunset from the ferry, but the light was bright and low-angled. 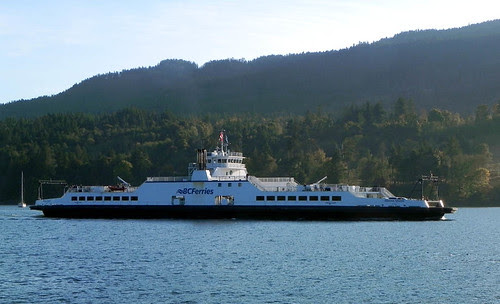 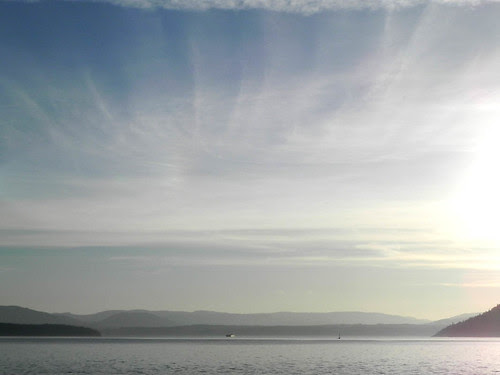 Here's a description of part of our route from people who launched where we did, and then paddled direct to Conover Cove to camp as their first leg on a longer trip. Shawn estimated that a full circumnavigation would take 5-6 hours of paddling. There's evidently a nice campsite at the north tip of Wallace Island, accessible only by boat.
Posted by Alison at 8:30 pm No comments: 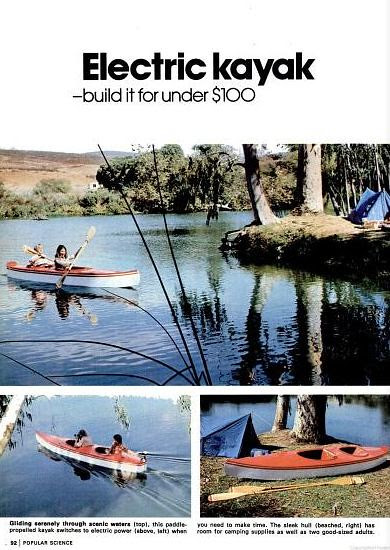