Today's paddle was cancelled not only due to the new six inches of steel in my arm, but the 10 inches of snow on the ground.
It appears that I will survive my bike accident but I am a long way from kayaking again. Luckily, in light of the recent bad weather, I created a few filler pages with other shots from some last summer's paddles. I guess I'll be using those sooner than I thought! 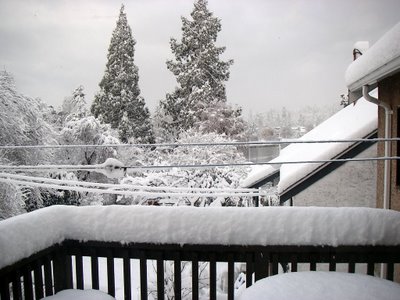 Well it seems that I have missed the boat on posting the news about John. As he is unable to type, I am taking the liberty of at least posting about our kayaking course which we took on Sunday. John and I signed up for a rolling course as there were only 4 spots and that meant instruction would be very one on one. Boats, skirts and paddles were provided.

Our group consisted of 3 men, our instructor, Scott and moi! Scott began the class by telling us that men take a little longer to learn to roll whereas women learn very quickly due to listening!! As Gord had already done the course once Scott decided to get him started first as he already had the basics. The lesson progressed with Gary next and then John. In the meantime, while one of us was learning, the rest of us practiced bracing and turning with our boats using the sweep but tipping the boat ever so slightly. Makes turning a lot faster!

Our class was only 3 hours, and although all the men got instruction on rolling, I didn't. I did get a chance to brace my kayak and get a "feel" for what would be the next step. As John had learnt the basics I thought he would be able to show me. In class we learnt about keeping your elbow/shoulder in your side so you don't dislocate it. Keeping your paddle on the surface rather than deep in the water. I thought Scott was an excellent instructor and recommend this course.

What I did learn, and did three times, was to hang upside down in the kayak. To slow down and gently pull of the skirt, push myself out of the kayak and float to the surface. All without any panic.

Cost of course $75.00 Cost of hanging upside down without panic and finally mastering my fear......priceless....

Next summer I hope John and I will be able to go to Thetis Lake to practice. Scott said Elk Lake wasn't a good place to practice rolling.....too polluted.

And now the rock part......well it wasn't a rock John hit with his bike, and he did a different kind of roll on November 20. I really can't express how much relief I felt when I arrived at Vic General Hospital and was able to assess the damage, and that although the damage is bad, it wasn't worse.
Posted by Lou at 10:16 pm 1 comment:

This just in -- newsflash!

Our most dedicated blog poster, John, took a tumble from his bike yesterday and ended up in hospital.
On the positive side, he recognised that he had an arm injury and actually made his own 911 call. A neighbour stayed with him till the ambulance came and took his bike home. This is actually quite surprising, as many men of my acquaintance (notably Bernie) would be more likely to push the bike home and call for a cab. Maybe the steep hill on which John lives was a factor in the decision, but I prefer to think that the wise choice John made was a sign that he may not have suffered any head injury in the fall.
On the negative side, he's in surgery right now and will not be biking or kayaking for a while.
We'll post what news we get (or John will himself) but for now we'll be optimistic about his surgery and send him plenty of good wishes for a full recovery.
Posted by Paula Johanson at 1:36 pm No comments:

Another Sunday's paddling has been wiped out by stormy weather. That's three Sundays in a row. This must be the stormiest November on record as we are dealing with our fourth bad wind and rain storm this month. The mid-part of Vancouver Island was hammered by a bad storm earlier this week. Downtown Port Alberni was flooded out and without power for a couple of days. They haven't seen anything like this since the 1964 tsunami flooded the town. Vancouver has also been pummled. Two million people are on a "boil water advisory."
But I guess we better get used to this. Climate change is here. We're living it.
Posted by John at 9:38 am No comments: 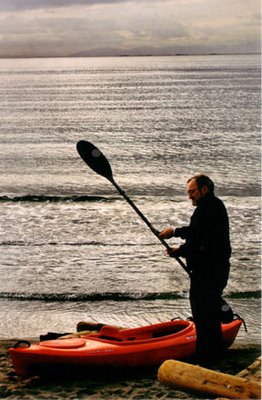 A photo my daughter shot. My, but she's developing quite the eye. This is one of my two favourite pictures now...
Posted by Bernie at 6:16 pm 1 comment: