How Not To Steal a Kayak

Planning to steal a new kayak? This video offers some tips on how not to do it.

How Many People Does It Take to Paddle an SUP?

Apparently, the answer is 7. That is, if you're the Jamie O'Brien SUPquatch Team and you're SUPing in some crazy surf in Hawaii. Check out the fun clips below:

Email ThisBlogThis!Share to TwitterShare to FacebookShare to Pinterest
Labels: stand up paddleboarding, video

Tying to master your re-enter and roll? Here's a couple of videos that may help you master this rescue technique.
In this first video, Dympna Hayes from the Ontario Sea Kayak Centre shares the starightforward tips to perfroming this roll:


In the second clip, Gordon Brown demonstrates two versions of the re-enter and roll, including one using a paddlefloat. 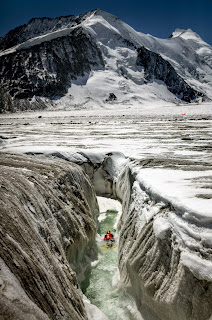 The latest craze in crazy things to do is called hydrospeeding which is basically boogie boarding down glacial rivlets. Photographer David Carlier followed Claude-Alain Gailland and Gilles Janin hydrospeeding down a seven-mile stretch of the Aletsch Glacier, a UNESCO World Heritage Site in Switzerland.
Check out more his photos here and here.
Posted by John at 7:00 am No comments: 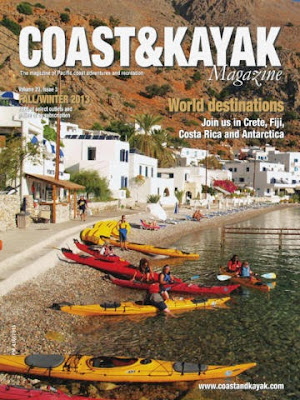 The latest issue of Coast and Kayak magazine has wound its way to me through the mysterious vagaries of the Canadian Postal Service, along with word that this issue will be its last. Sort of.
After the recent demise of the much-missed Sea Kayaker magazine, this is the second kayaking magazine to paddle into the sunset over the last couple of years. Changes in the magazine market have once again made publishing a “kayaking only” magazine a losing financial battle.
The magazine has a long history as it spent two decades being published under the name Wavelength Magazine before changing names a few years ago. And the name is changing again, as editor John Kimantas had announced the magazine will continue publishing as Wild Coast Magazine, which will focus on many aspects of west coast recreational life, and not exclusively focus on kayaking. Essentially, this is the return of the Wild Coast name as Kimantas previously published a single issue of Wild Coast Magazine in 2008 but he discontinued that magazine when given the opportunity to take over Wavelength. The new name of Wild Coast also ties in nicely with Kimantas' excellent series of Wild Coast recreation guidebooks.
So we say goodbye to Coast and Kayak, but welcome the return of Wild Coast.
Posted by John at 7:30 pm No comments: 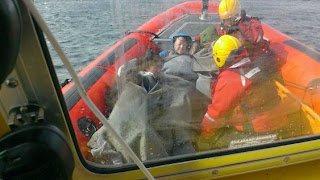 A pair of people in a tandem kayak and three people in an inflatable dinghy were rescued off Parry Bay in Metchosin near Victoria yesterday.
Royal Canadian Marine Search & Rescue - Station 35 Victoria was dispatched to perform the rescues; they've posted up some pictures and a quick write-up on their Facebook page. The wind was gusting heavily yesterday which presumably played a part in both incidents. No one was injured.
Posted by John at 4:36 pm No comments:

Mark your calendar! The date for this year's MEC Victoria Paddlefest has been announced -- Saturday, July 18, at its usual location at Willow's Beach. Check out the details here.
Posted by John at 7:00 am No comments: 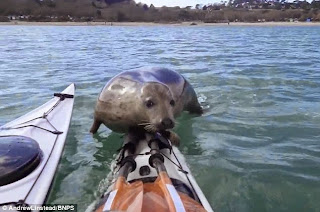 A kayaker in England has made friends with a seal, and has had three encounters with it over the last few months. In the latest, caught on the video embedded below, the seal tries its best to climb onto the kayak, falling off and spalshing into the drink a few times before it finally succeeds. Apparently many local kayakers have had encounters with the seal, so many that the locals have given it a name, Ron.
Posted by John at 7:00 am No comments:

Wanna show the world how tough your canoe is built? Why not throw it off a building!
That's what the guys at Nova Craft Canoe did. You can find out how that worked out by checking out the clip below: 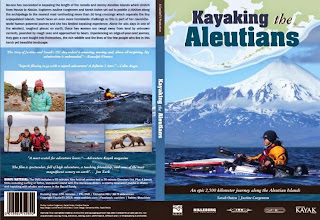 Last year, Sarah Outen was rowing across the Pacific Ocean from Japan to British Columbia as part of her London2London human-powered global circumnavigation adventure. She had already kayaked from London across the English Channel, rode a bike across Europe and Russia, and had kayaked from Russia to Japan. Now, she was making her second attempt to row across the Pacific; her first attempt failed when her specially-designed row boat started leaking and she had to be rescued. Her second attempt was faring better, but the weather gods were not cooperating. After weeks on the water, she realized that the winds and currents were making eastward progress almost impossible. In fact, they were pushing her north towards Alaska. And that's when she improvised Plan B. Enlisting the aid of adventure kayaker and filmmaker Justine Curgenven, Sarah decided to put her rowboat ashore at the western tip of Alaska's Aleutian Islands, and kayak the length of the archipelago, up the Alaska panhandle to the nearest road so she could continue her human-powered adventure by bicycle. She and Justine spent 101 days kayaking 2500 kilometers in one of the most remote places on earth. Fortunately for the rest of us, Justine took along her cameras.
Highlighted by the incredible and magnificent scenery of the Aleutian Island chain, Justine's new DVD, Kayaking the Aleutians, simply proves again what the kayaking community already knows: she is a marvelous filmmaker. Not only does she deftly capture the astounding natural environment such as the wild storms, the bear encounters, and the sea lions encroaching on their camp, she is equally adept and bringing out the human side of the story: her friendship with Sarah, the charming encounters with the locals, the joy at the end of a day of successful paddling, and the anxiety when the paddling day is on the brink of going seriously sideways. There were many such days, as Justine and Sarah had to deal with uncooperative currents, raging winds, and equipment failures, but, buoyed along by Sarah's seemingly unfailing optimism, the two friends completed a journey that the rest of us can only dream about.
The DVD also contains four short bonus films; a windy paddle in Wales, kayaking in the Bay of Fundy with whales, and two films about kayaking in the waves at Tofino with The Hurricane Riders. Don't hesitate to check it out if you have a chance.
(And here's a little bonus: Justine being interviewed on Toronto morning tv. Sorry, no embed available.)
Posted by John at 9:17 pm No comments:

I'm not all at all sure of the ancestry of this video, but it has great photos and clips of vintage whitewater kayaking from nearly six decades ago.
Check it out: 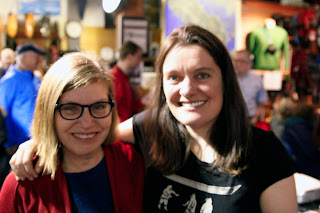 Earlier this evening, Louise and I saw adventure film maker Justine Curgenven speak about her latest kayaking DVD, Kayaking the Aleutians, at Ocean River Sports in Victoria.
Creator of eight paddling films, including five in the terrific This is the Sea series, Justine's latest film about her adventures paddling the Arctic archipelago of the Aleutians has won all sorts of awards since its release.
Last year, Justine joined adventure traveler Sarah Outen for part of Sarah's human-powered round-the-world journey. Outen had planned to row from Japan to Vancouver, but weather and currents were pushing her north towards Alaska, so she changed tack and decided to kayak along the Aleutians and invited Justine along for the paddle. Justine presented a slide show as she described her amazing adventure, punctuated by both clips from the film, and her famous cackle.
What a treat to hear Justine tell her story in person as she is just as engaging a storyteller without a camera as she is with one.
Her North American Tour continues through the month of March, and you can order all of Justine's DVDs here.
We'll publish a review of the DVD soon. In the meantime, enjoy the trailer: