It's not in my nature to get too personal on this blog. But this year has been unlike any other I've experienced, and the only stats that matter this year are ones that in our quiet moments almost bring us to tears.
In 2011, Louise lost her father. In January of this year, my extended family back east was dealt a blow as my sister lost her husband to cancer, followed a few months later by his father. Louise lost her mother to cancer in October, then my sister's mother-in-law passed away in late November. Then my sister died unexpectedly a couple of weeks ago. Louise lost both her parents in little more than a year, and two generations of my family back east were gone within ten months. So you can imagine our desire to just get this miserable year over and done with.
We have reached the age when we will start losing friends and family with unfortunate regularity. That our families would suffer so many losses in such a brief window has left us both stunned into disbelief. It's almost like one of those stories that only happens to other people. Except it's us instead.
But they're still here, as long as we remember them. And the sun still comes up each morning. (Except of course, it's winter here on the We(s)t Coast, so it's less like the sun comes up, and more like the rain clouds overhead just get lighter. But I digress.)

The most popular article published on the blog this year was this post about a local paddler who managed to video his own rescue, followed by our post noting the passing of Don Starkell, followed by our review of the This is The Roll dvd. Our most popular paddling post from 2012 was our day at the 2012 MEC Paddlefest Victoria.

Our paddling year pretty much ended when Louise's mother received her diagnosis in September. But we can see that the trend towards more sunny days over time continues. The climate is changing before our eyes. 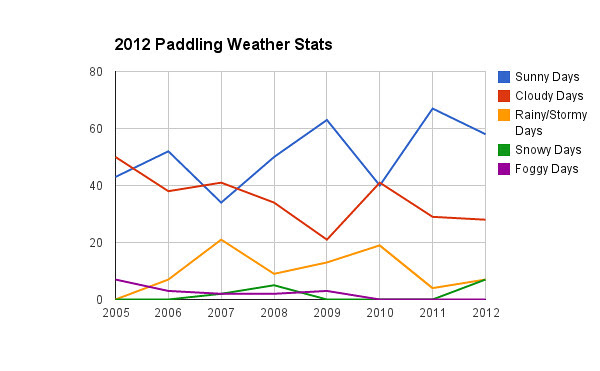 The Grinch Pays A Visit

According to Alana on her Beachpebbles blog, the Grinch paid a visit over Christmas and stole this kayak from Granville Island in Vancouver. She writes, "It is a Valley Avocet with a gold metal flake deck, red seam, and a white hull. It's pretty distinctive and you will know it when you see it. The boat was stolen from Granville Island in Vancouver, but it could be anywhere along the coast, on Vancouver Island, or even in Washington State." 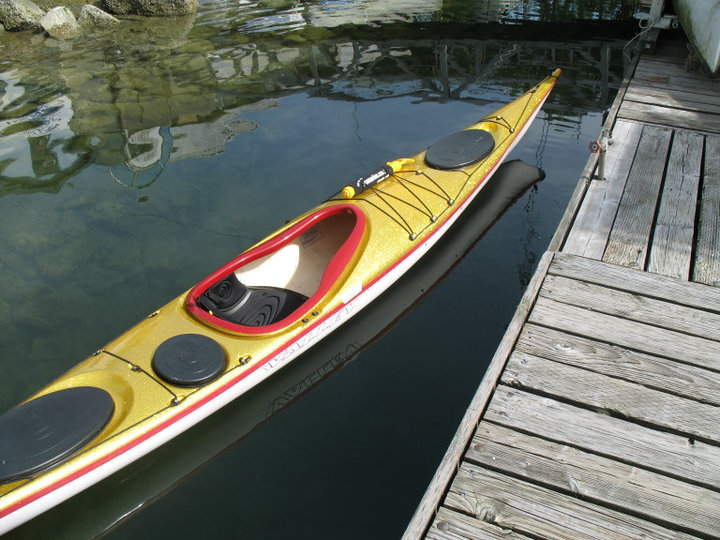 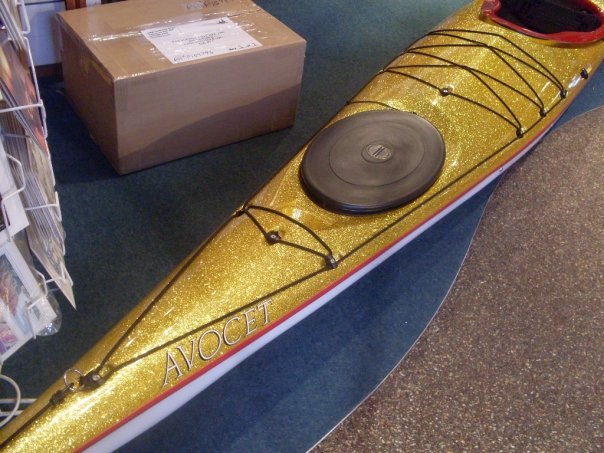 So be on the look out and if you see it, contact Vancouver Police, and let Alana know.
Posted by John at 11:39 am 1 comment:

No Kayaking Gear Under the Tree...

....but there was the best T-Shirt ever! 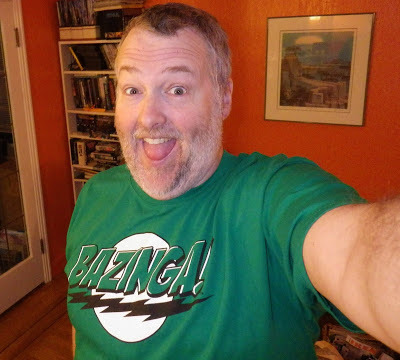 Email ThisBlogThis!Share to TwitterShare to FacebookShare to Pinterest
HAPPY KAYAKMAS! 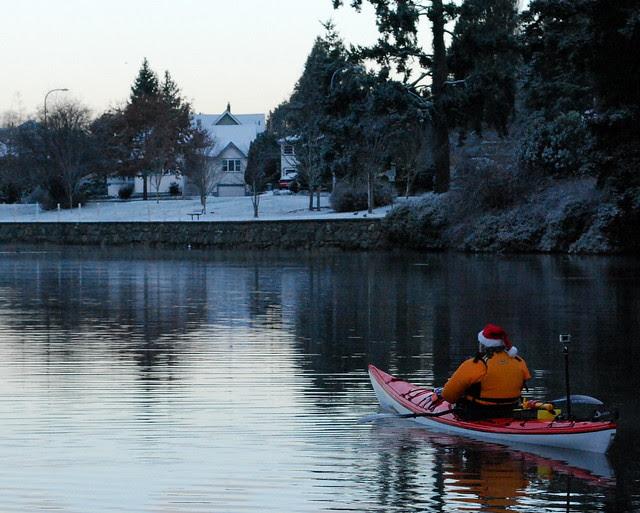 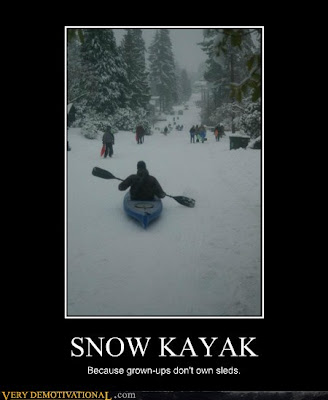 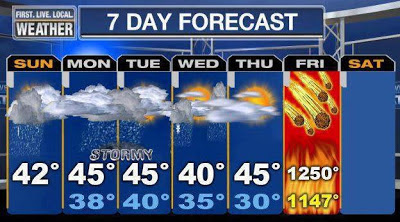 Coastal Kayaks From Back in the Day

Here's an article on "coastal kayaks" from a 1985 issue of Popular Mechanics. 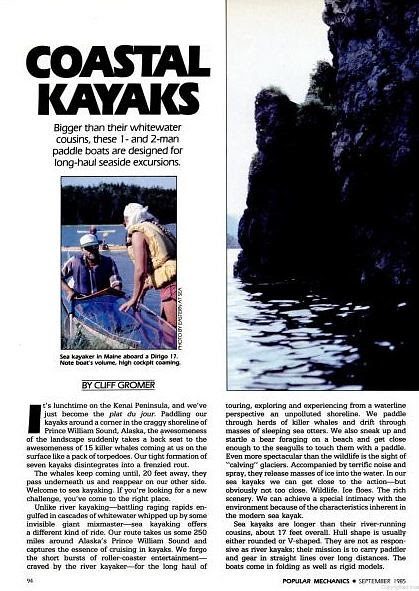 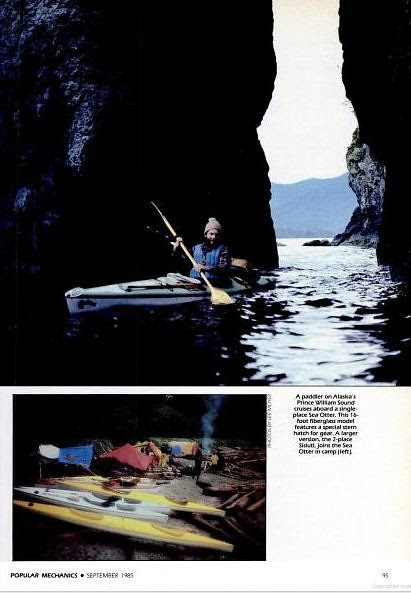 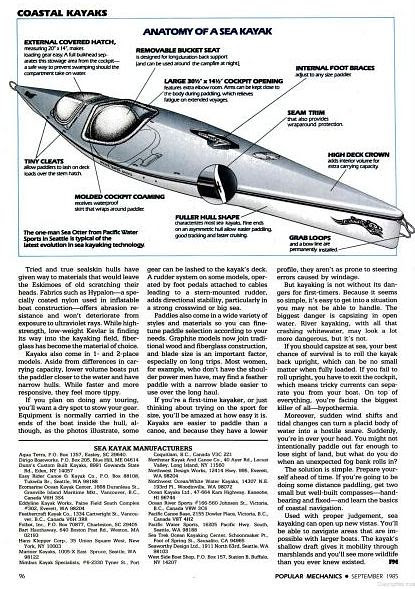 I checked out the names of the kayak companies at the end of the article. Most of them still seem to be in operation in one form or another, including our local Ocean River Sports.
Posted by John at 7:14 pm No comments:

Heads up! There's been ANOTHER spill of home heating fuel into the watershed in Greater Victoria. You can read about it here at the Times-Colonist newspaper website. This one's in Saanich (again!) and this time, it's a spill into Blenkinsop Creek, which drains into Swan Lake.  If you've ridden your bike or walked on the Lochside Trail where it approaches McKenzie Avenue and the Galloping Goose trail, you've ridden beside this stream or over its culverts.
The Times-Colonist article noted that:
A fact sheet from the provincial Environment Ministry says homeowners are potentially liable for cleanup costs whether they are aware of the existence of an oil tank or not.
Scary thought, eh? And home insurance doesn't cover fuel spills. One of the recent cleanups cost the homeowners $35,000.
This spill came after the latest spill that went into Swan Creek, which like Swan Lake, drains into Colquitz Creek and on to Colquitz River and Portage Inlet. Poor Colquitz! We've paddled there several times, and salmon are spawning there again. It's dreadful to think of several fuel spills into that quiet waterway this year, as the Saanich News has been reporting. There are fewer of these fuel spills in nearby Oak Bay because for the last fifteen years, the fire department and municipality have been contacting homeowners to remind them to have unused tanks safely removed.

At this point, I should apologize to regular readers of Kayak Yak. A couple of times now, I have urged readers to go and check any fuel tanks at their homes. I might even have given the impression that if there were flaws in your tanks, you would see them. Of course, if there is a visible flaw in the tank, or an oily patch under it, I'm sure that anyone would immediately get an expert in to service the tank.
But apparently, an old tank can go from "looks ok" to "leaking" pretty darned fast... even when it's been checked by an expert from the fuel oil company. As one homeowner with an unexpected leak said to the Saanich News:
“We had a platinum protection plan where (our oil company) would do sonic testing of the tank to check the thickness of the walls. We were also using their oil that’s supposed to have additives in it that retards corrosion,” Keith says. “We were sort of relying on that plan, to some extent, to give us a head’s up if something was up. At the end of the day that didn’t help us out. We’re kicking ourselves now – it was an old tank, why didn’t we just replace it? For $2,000 we could’ve avoided a ton of grief.”
Oboy.

So I am changing my tune.
No longer will I rant to kayaking friends that they should go out right now and look at the tanks holding fuel for their homes to check for leaks. Of course, my friends have already done that. As well, it seems that leaks can happen suddenly and aren't as obvious as the crack along the coaming in my second-hand Pamlico kayak from Wilderness Systems.
Instead, I will remind you of the statements by experts in the local newspapers: twenty-year-old fuel tanks can and do fail suddenly. If your home/house/building is anything but brand new, make a proper plan! Don't let your home heating system be the cause for an expensive and environmentally damaging spill.
I'm sure anyone would rather buy a new kayak than a new fuel tank... but at least you could stencil a drawing of a pretty kayak onto the side of an above-ground tank. And maybe add the words NEW IN 2012, like my landlady's hotwater heater has written on it the words NEW IN 19... ohmygosh, it's time to replace the hotwater heater here. Well, at least this appliance wouldn't leak petroleum products!


Posted by Paula Johanson at 2:07 pm No comments:

Email ThisBlogThis!Share to TwitterShare to FacebookShare to Pinterest
Labels: safety

News from the Georgia Strait Alliance

Dunno where you live, but our paddle group lives on the Salish Sea. We like to keep informed of community groups that are interested in this beautiful part of the world. One of these groups is the Georgia Strait Alliance. Here's part of their latest e-mail mailing list update, which is of particular interest for kayakers in this area:

The Georgia Strait Communities Atlas has a new web address, so don't forget to update your bookmark! Although we've moved the site, we are still proudly a part of the UVIC Community Mapping Initiative (http://mapping.uvic.ca), and look forward to working with them in the future.

Did you know that you can submit your own videos to the Georgia Strait Communities Atlas? One of our goals for the Communities Atlas project is to encourage you to participate in the creation of a rich and informative Local Knowledge section of the Atlas. Check out our Atlas to learn more about how you can get involved, and read our blog about the newest member of the Atlas team (Meet Megapus).

A Clean Marine BC Resource Map is now available. This Google Earth map will help you find green boating resources around the region (including the locations of marinas participating in our CMBC eco-rating program), sensitive habitat areas, and information about best practices that will allow you to protect the Georgia Strait, while enjoying her amazing waters and shorelines.

Posted by Paula Johanson at 3:42 pm No comments:

Email ThisBlogThis!Share to TwitterShare to FacebookShare to Pinterest
Labels: mapping

How Our Grandparents Did It

Here's some kayak plans from a 1935 issue of Popular Mechanics. 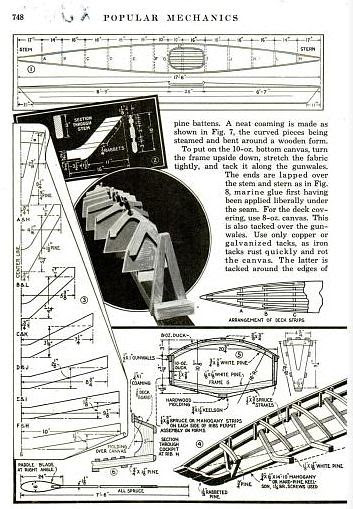 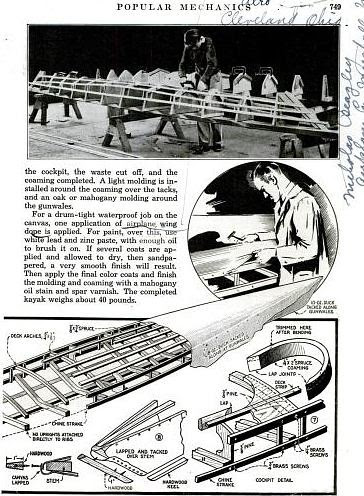 Today when I launched my kayak at Cadboro Bay, there was not much beach. It was high tide, and a winter high tide (which stacks the sand up pretty steep). Plus, there was a storm surge which pushed the high tide about half a metre higher than the predicted level. The ocean sure looked full. In the park, there are ponds of standing water that have nowhere to drain.
There's a graph at the DFO website that shows how the storm surge has been affecting the local water level lately. (Thanks to Mike Jackson for the link!)
Strong onshore winds the last several days have driven many more logs into the bay and onto the beach. It was an ankle-breaking wrestle to get through the broken bits of driftwood and logs and water. And once I was afloat, there were many floating pieces of wood to avoid. There wasn't any wind, so the waves were small. It was an odd experience -- I wouldn't try paddling with all this driftwood if there was any surf to speak of.
Over by the Yacht Club the shoreline looked so different. Rocks that normally are exposed at high tide were underwater. The breakwater was only one row of boulders above the waterline, and it was decorated with bits of driftwood. One big log balanced on top of a few boulders.
I've never seen high water like this. On December 12, there's supposed to be a zero tide at 6:00 am. It'll be neat to see the difference along the shoreline!
Posted by Paula Johanson at 9:53 pm No comments: