Into The Deep Past

This year, I missed the first day of Paddlefest in Ladysmith, BC on a Saturday, May 14. After five years, it was a disappointment not to be there to see all the boats lined up along the shore, and talk with other kayakers. But I missed the first day of the kayaking festival for something really good instead -- something my paddling group has been looking for since we first paddled off Sidney, BC.
It was all for rocks.

One look shows how different the rocks are from one headland and island to another around Vancouver Island. There's something important to learn about geology here on the Saanich Peninsula. Look at some of our kayaking group's photos from Robert's Bay and Coal Island and the Little Group! But how to learn the local rocks? Hands-on is the best way to learn in the physical sciences. We needed a tour with a geologist. And I got one on that Saturday in May.

The Capital Regional District of greater Victoria set up the tour, finding a geologist from the Pacific Geoscience Centre on Patricia Bay near the airport. Dr Chris Yorath took two dozen of us volunteer naturalists off on a wild tour of several sites, from Island View Beach and Parker Park to Cattle Point, Finlayson Point, Goldstream River, Esquimalt Lagoon and then to Tower Point at Witty's Lagoon.

Most of these places I've been to lots of times as a child and an adult. Tower Point is a park that previously I've only seen from my kayak, when we're rounding Albert Head and going to Witty's Lagoon. You can see our blog posts on the website Kayak Yak about that area here. Parker Park is a beach access that I hadn't used before, but around Victoria there are beach accesses everywhere. The municipality of Saanich had to explain to a developer that property fronting onto Portage Inlet couldn't just cut off public access to the beach. I love it that the government is on our side on the issue of beach access!

Walking along the shoreline at place after place, Yorath spoke about the ancient origins of several kinds of rock in this part of the world. As the continent of North America drifted westward for millions of years, it ran into island chains (something like Hawaii today) that piled up along the West Coast. All of British Columbia is made up of these wrinkled ridges of rock, previously separate but now smushed together, called terrenes. Several of these terrenes can be found packed together here at the south end of Vancouver Island. Even easier to see were the most recent geological changes, caused by the glaciers of the most recent Ice Age. Yorath showed us basalt pillows that originated in undersea volcanoes a hundred million years ago, and that have been carved away by glaciers. The rock underfoot has veins of quartz, tilted layers of shale, sandstone, sandy bluffs, and conglomerate.

Yorath is exactly the geologist you want for a tour like this! He literally wrote the book on local geology -- Geology of Southern Vancouver Island, revised edition. While we were on the beach at Parker Park in Cordova Bay, we ran into students from Royal Roads University who carried copies of the book. Shyly, they asked for his autograph.

Yorath knows his earth science, and he has been walking over these local sites for decades. The man showed us his favourite basalt pillow. Any scientist with a favourite example of a rock formation is my kinda scholar! He spoke of how the scientists who studied mid-oceanic volcanic ridges were working locally, confirming not only the theory of continental drift but the reversals of the Earth's magnetic field. The places we walked over and examined were the ordinary parks we naturalists had visited for years, but with Yorath's commentary we understood them in new ways.

The rocks around us looked so permanent, but he showed us that we could see the changes and how one layer of rock overlay another. Fifty million year old rock actually looked newer than rock a hundred million years old. We could see the weathering and cracking in some places, and the big gouges from glaciers in others.

Yorath told us that the edge of the North American continent is colliding with and riding up over the Pacific Plate under the Pacific Ocean. Those mountains we could see across the Strait of Juan de Fuca, the Olympic Mountains in Washington State, were being forced higher and higher at an inch or a couple of centimetres a year. Wind and rain and gravity was wearing down those mountains too, at about the same rate, so the peaks wouldn't get much higher than they were now. John took this photo showing the Olympic Mountains. 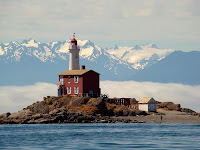 We could see why, for example, the Gulf Islands are mostly made of harder shale, where the softer sandstone has been worn away by water and glaciers. John took this photo showing layers of shale along the west shore of Thetis Island. And now I understand why our beaches are a muddle of many kinds of stone -- it's because the glaciers scraped across this whole area time and again. Bits of stone and sand clung to the bottom of the moving ice and were carried for a short way or for many miles from one terrene to another before being left behind as the ice melted. During the latest Ice Age, sea level had been over a hundred feet lower than it is now. Ten thousand years after the great glaciers melted, the land here is still rebounding, springing up now that the great weight of ice is gone. 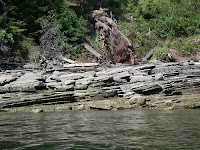 During Yorath's career, the rocks hadn't changed except for the most minimal of weathering, but the understanding of geology had changed profoundly. It made me dizzy, to see these stones the way he spoke about them. Time was suddenly something to think about differently than the speed of my own movements. Hot lava emerged from underwater volcanoes, cooling quickly to glass on the outside curves of slowly hardening billows and pillows. Grit and organic debris settled down so thickly and for so long that it compacted into rock under its own weight and under new lava. Mountains split and piled up like the snow I plowed from my driveway. Smooth, flat shale and slate bent like taffy, pushed by a continent colliding with volcanoes sprung from an ocean floor. There's a big bend in the layered rock visible on a cliff above Horne Lake, up-Island, and I could see it twisting in my mind's eye, an inch a year. Rigid bedrock was springing up underfoot as the weight of the glaciers melted away ten thousand years ago. The slump at the south end of James Island, making a sandy bluff and shallows, fluttered like my hair in the offshore breeze. The ocean water around our islands was as transparent as the air to my new vision.

I felt like a mayfly, or a daylily, fluttering in my short, twittering life while glaciers ran like the rivers where I paddle my kayak and the limestone and sandstone silted up and hardened like the mud on my kayak and my shoes. It was humbling.

You can understand that I kind of staggered around for the next couple of days. I was observing things! I was walking into the deep past, and watching how rock hardened and layered and bent. It all felt as familiar as cooking jam and watching it set, or stretching taffy, or baking an impossible pie that settles out its own crust and topping. It especially felt like shovelling snow off the frozen driveway -- the weight and the pressure and the texture changes. And of course, the rocks were familiar... they were the same ones I'd clambered over since I was a child.
Posted by Paula Johanson at 4:20 pm