Ladies and gentlemen, it's been a long wait, but that wait may finally be over. May I present, in all its glory, summer!

Saturday may have been the first day I ventured outside without a jacket since last September. And Sunday promised to be sunny and warm, some might even say "hot." It would eventually hit 21 degrees in the afternoon, and it must have been the hottest day since last autumn.

It was under these bright sunny skies that Louise and I participated in a Tidal Currents course put on by the fine folks at Ocean River Sports. Long-time readers of this blog may recall that we took the course last year under conditions that were less than ideal, and Ocean River gave everyone in the course a do-over. Out of the six people on the course today, four of them were from last year's adventure. Another person had a fair amount of experience, and as for the last student, he'd been in his kayak in a lake, but this was the first time he'd been out on the ocean. Talk about jumping in with both feet!

Louise looks thrilled at the prospect of being out in the currents again. 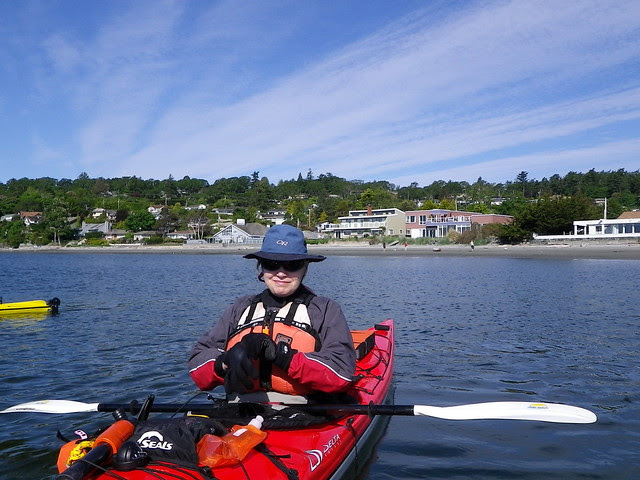 This was also the first test of the new hip pads we installed in her kayak last week.

It really was a beautiful day. Thin clouds slowly drifted by on a light breeze. Discovery and Chatham Islands were calling us.... 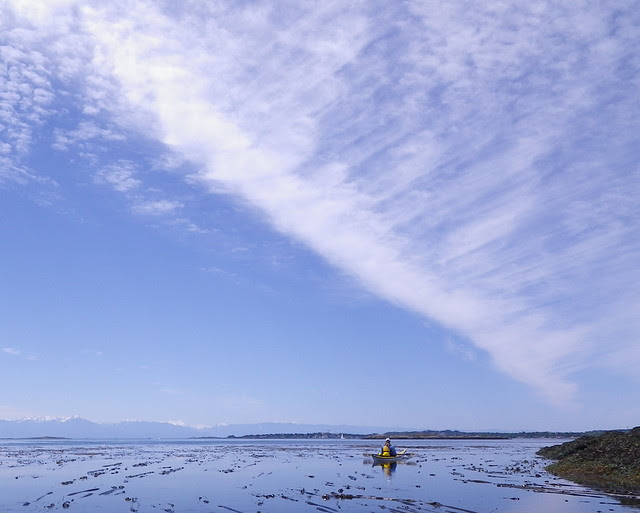 ...but we stuck close to shore and headed out to Ten Mile Point. 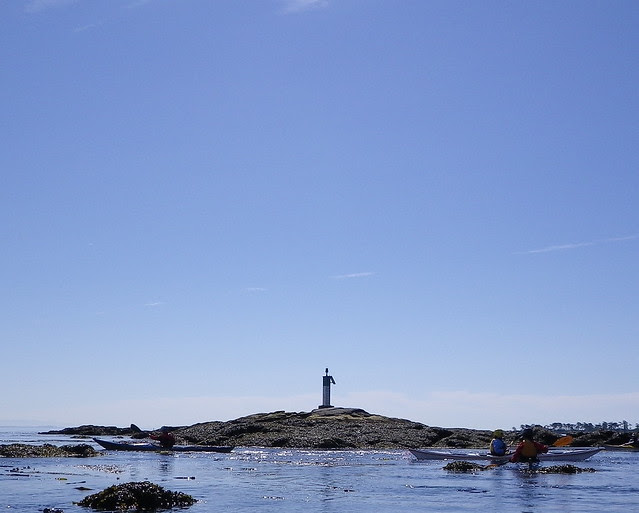 We've paddled here lots of times, but today we were planning to be there at maximum current. Our instructor Gary estimated the current at about four knots. Max current was early today, so he wanted us on the water right away to take advantage of it. He would deal with the theory part later back on the beach.

We huddled together in an eddy while Gary quickly checked the lay of the land...um, I mean water. 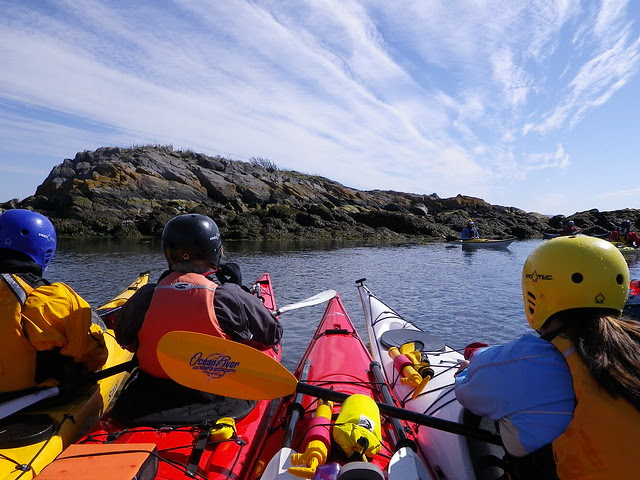 Ten Mile Point is a rocky area with many outcroppings and islets. Gary found three main currents runing through the rocks: a mild one near the shore, a second stronger one further out, and a third, stronger still, and futher out again.
Gary moved us to the mild current to demonstrate how to peel into a current, but as he hit the current and planted his low brace, a sea lion popped up from behind a nearby rock, possbily annoyed that he now had to share the ocean with us. Gary returned and demonstrated the maneuver again as clearly the class had been distracted.

From there, we moved to medium current, then to the fast current. Louise was feeling a little apprehensive and hung back at the medium wave with Janette, the co-instructor. She is still feeling a little unsure in her boat, and she dislikes being around large sealife and the sea lion had spooked her. What she didn't realize was that when she stayed back, the sea lion popped up right behind her without her noticing! But she quickly gathered her courage and joined us out in an eddy near the strong current. 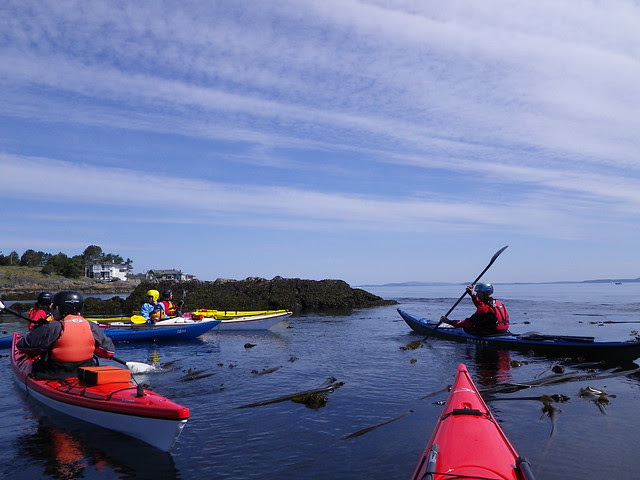 Gary demonstrated how to play in a small standing wave.... 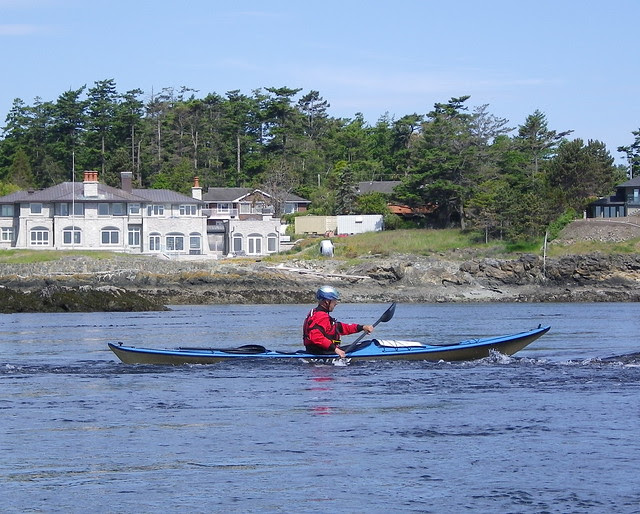 ...and the rest of us gave it a go, some more successfully than others. 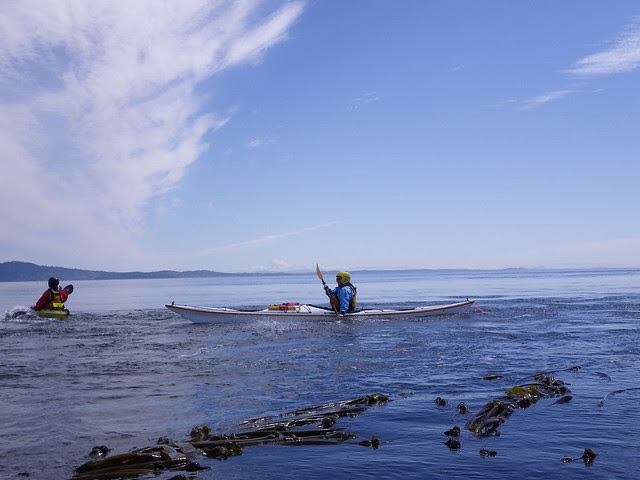 Of course, the most successful of us was the sea lion. 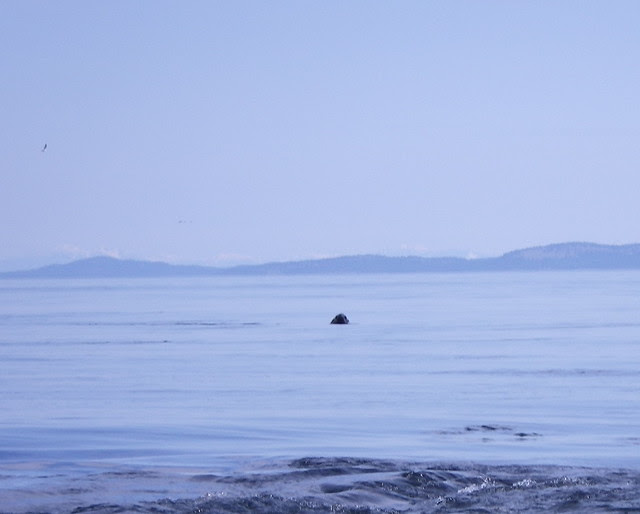 He spent the morning riding the current over and over again like an amusement park ride, showing us stupid humans how it's really done.

Finally, we headed back to the beach for a snack and the theory, avoiding the traffic jam of geese as best we could. 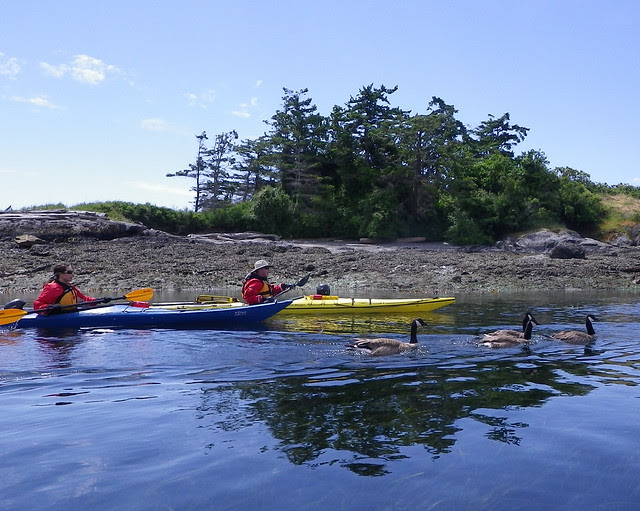 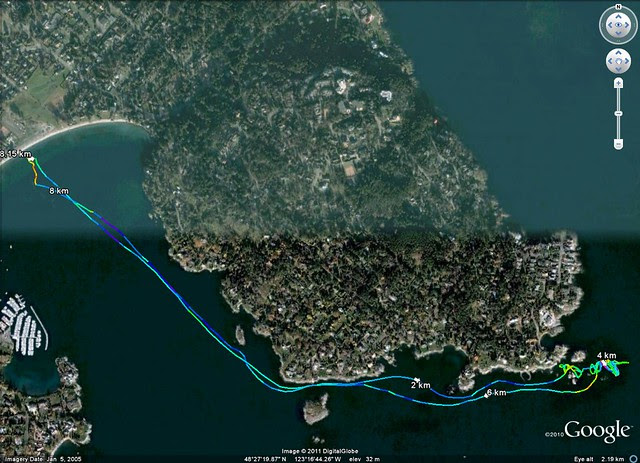