Justine Curgenven and Cackle TV have begun to offer many of her splendid kayaking films from the award-winning This Is The Sea DVD series as digital downloads. With Canada Day looming at the end of the month, Cackle TV has teamed up with Kayak Yak to offer something special to Kayak Yak readers.
From now through Canada Day on July 1, you can download any of Cackle TV's three kayaking films shot in Canada at a 20% discount. Go to Cackle's Download page, select any or all of the following three films, and enjoy them at a 20% savings. Use the code word KAYAKYAK when you check out!

You can choose from:

Skooks (from This is The Sea 2)
Bryan Smith (an award-winning film-maker in his own right) survives getting trashed multiple times at the famous Skookemchuck rapids in British Columbia. This surfing wave provides beautiful green waves to carve on which turn into angry white monsters on big spring tides. Bryan shows off his skills and survives multiple rolls. 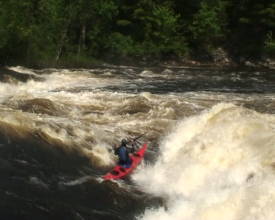 Ottawa River (from This is the Sea 4)
World champion kayakers Ken Whiting and Brendan Mark take seakayaks down the grade 4 high volume Ottawa River. Justine has to survive the rapids to get in position to film the experts. It's a good thing she knows how to roll! 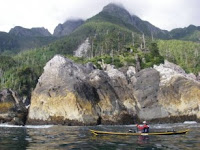 Queen Charlotte Islands/ Haida Gwaii (from This is the Sea 4)
In this terrific film, these beautiful, remote islands off the west coast of Canada showcase an assortment of amazing wildlife, wilderness camping, intimidating swells and Haida culture. Shawna Franklin, Leon Somme and Justine paddle 500 miles around the archipelago encountering humpback whales and 200 year old totem poles. This is one of my favourite of the This is the Sea films.

And if that doesn't whet your appetite, check out this clip from the Haida Gwaii film:
Check out these films and others at Cackle TV, and don't forget to use the code KAYAKYAK when you checkout to save 20% when you download the three films featured above!
Posted by John at 10:07 am

Email ThisBlogThis!Share to TwitterShare to FacebookShare to Pinterest
Labels: DVD, This is the Sea