Earlier this week, Louise and I took advantage of a sale by a local whale watching company and played tourist for the day. We headed to the harbour...

...to catch our ride out to see the mighty orcas, but as we approached the docks, my eyes were drawn to a new...um...sculpture that has appeared at the harbour end of Bastion Square. 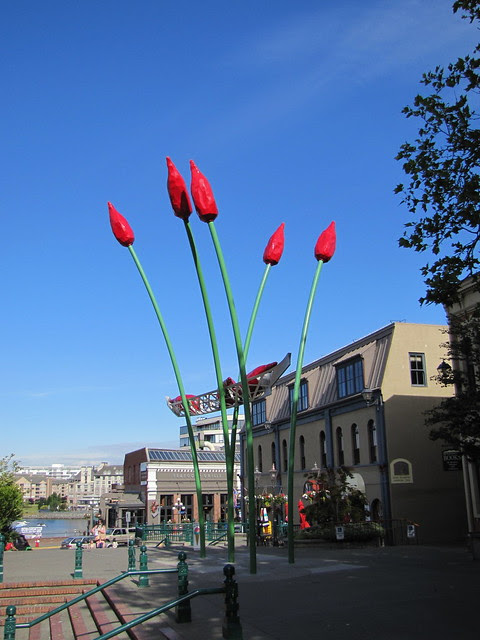 I thought they were giant red tulips, but Louise couldn't form a definitive opinion. She considered everything from red peppers to suppositories to things that must remain unmentioned on a family blog. The one thing we'd agreed on is that they were strange looking. And even stranger is that the stalks are supporting a canoe. Turns out that the stalks are supposed to be reeds topped with red seed pods. Who knew? At least we guessed the canoe correctly.

A moment later, we arrived at our destination, Great Pacific Adventures. 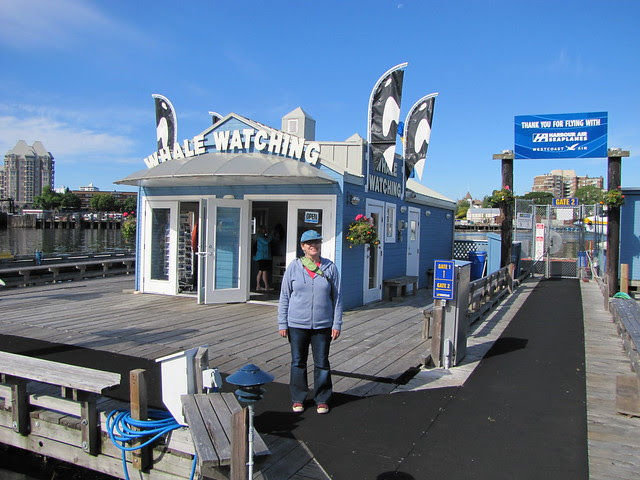 From here they offer all sorts of rentals, including bike, kayak and canoe rentals, but they also offer whale watching in both Zodiacs or on a covered ship. We were going to be heading out aboard the 45-foot cruiser King Salmon.
With 30 or so other passengers, we headed out of the busy harbour in search of orcas. In the harbour at low speed and under sunny skies, we found the beginning of the trip to be very pleasant.... 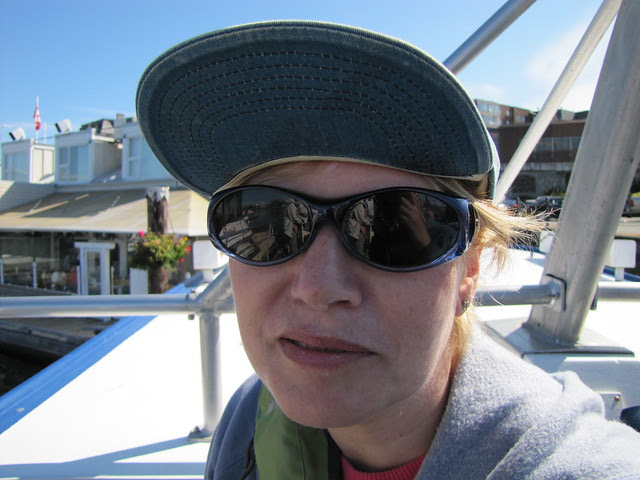 ....but as we left the harbour and the speed of the vessel increased, Louise suddenly felt the urge to bundle up as the cool wind buffeted us. 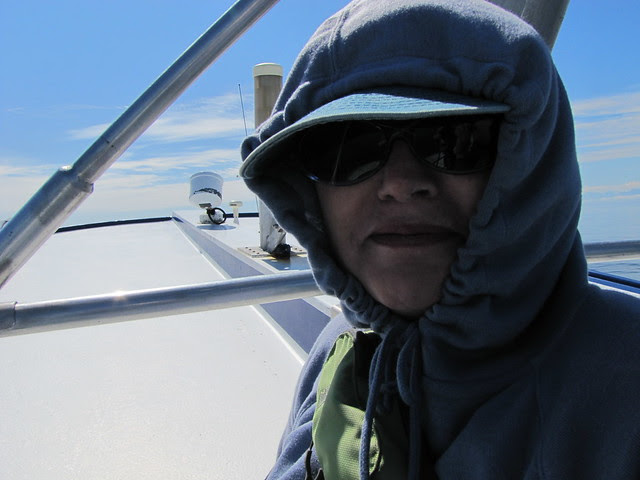 At least our boat was faster than the other whale watching ships. That's the most important thing. Not that I'm competitive or anything. 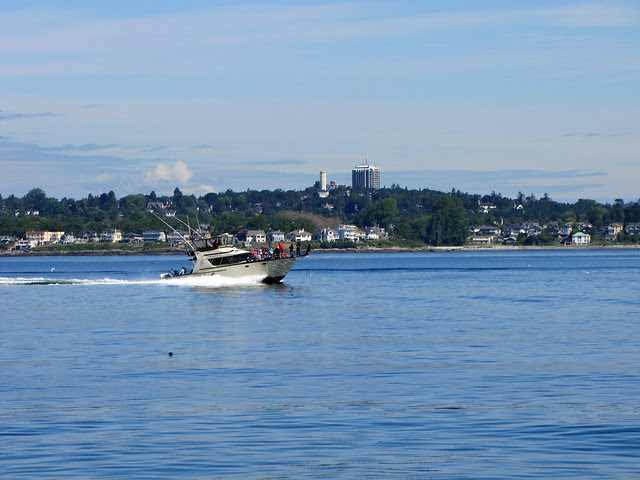 As passengers, we had no idea where we'd be headed. I'd hoped that the whales would be near some of our usual kayaking spots so that we could experience these locations in a different perspective. But no such luck -- we go where the whales are, and they where nowhere near where we kayak -- no wonder I've never seen one while kayaking around here!
In fact, I really had no idea how far we would have to travel to find them. Clearly the captain knew where to go; once out of the harbour, she bore in a straight line without deviation to her destination. Glancing at my GPS, I was surprised by the course we were taking.
"We're heading straight into American waters," I told Louise. "You've always wanted to visit Washington State -- looks like you're going to today!"
And me without my passport. I just want Homeland Security to know that all those awful things I posted about "W" on Facebook for all those years were meant as jokes. Really. I was laughing with him, not at him.
We did the nautical equivalent of burning rubber for over an hour, finally coming to rest off the south-western shore of Whidbey Island. All hands were on deck... 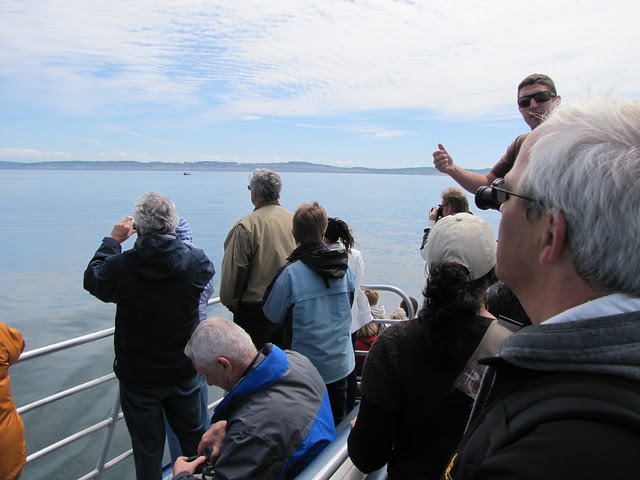 ...when we saw our first glimpse. 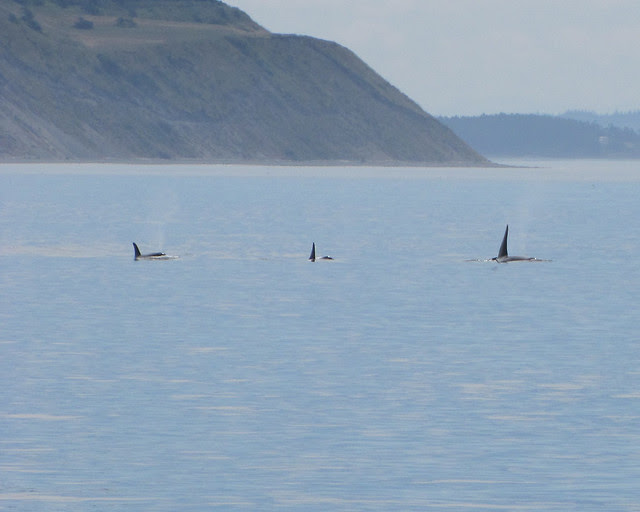 We quickly learned that we were looking at members of the local group called the Southern Resident Killer Whales, or more specifically, about a half dozen members of J-Pod. A twenty-year old male, J27 (aka Blackberry) was identified in the group. 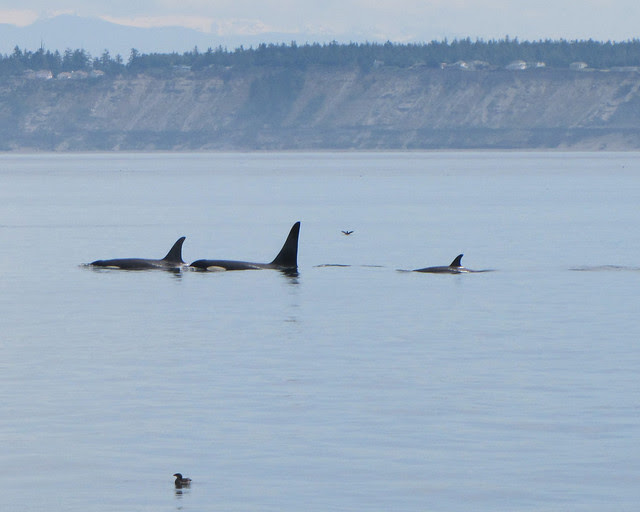 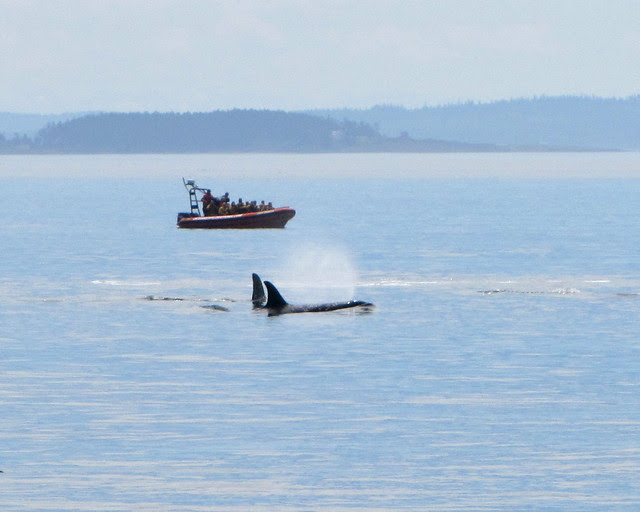 They were quite active and playful, diving and jumping and spyhopping as they fed, most likely on salmon, their main food source. I didn't get any photos of them jumping. For every picture I took that looked like this... 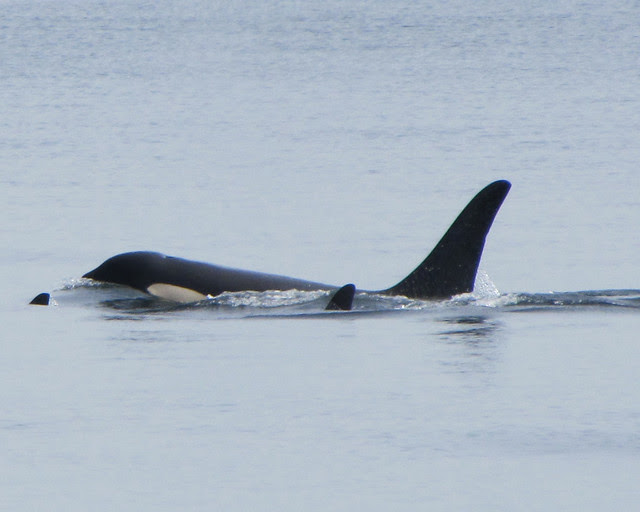 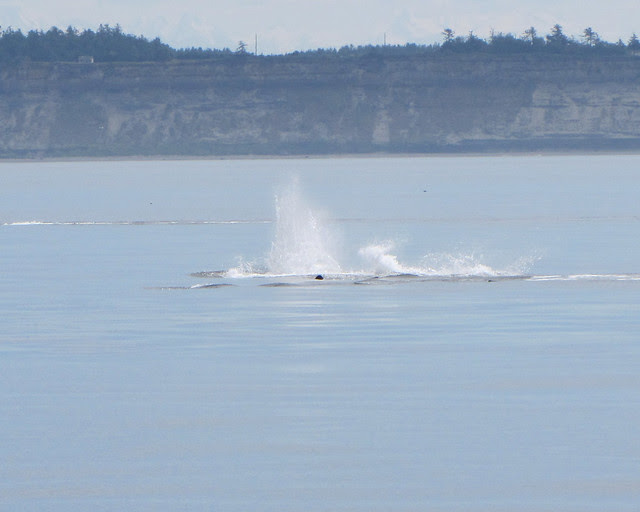 The local residents number only 87, and are considered endangered. Low salmon stocks, pollution, and a 50% infant mortality rate contribute to this designation, however numbers have bounced back somewhat since reaching record lows in the 1970s.
Does whale watching tourism have an effect of them? On this day, this particular group was surrounded by about 10 whale watching boats. The orcas didn't look particularly upset, but I'm certainly no expert, although one has to wonder how all the engine noise would effect animals with highly advanced auditory capabilities such as these. (Our captain did shut down the ship's engines when she could when near the orcas.)
How close did we get? The picture below will give you some idea. (The orcas are the tiny black spots above and to the left of the grey boat.) 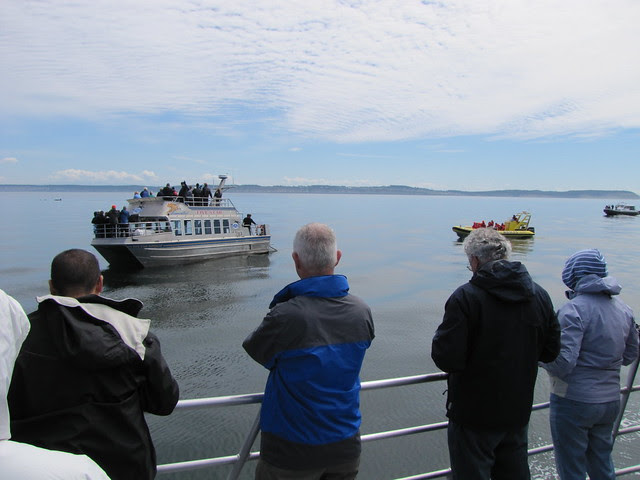 How close is too close? Who watches the whale watchers?

Fisheries and Environment Canada recommend that vessels (and that includes kayaks) should stay a minimum 100 metres away from whales. Don't approach from in front or behind, only from the sides.
Sometimes the whales have other ideas of course, and who's gonna argue with them? If you find yourself too close, back away slowly.
In American waters, officials take enforcement of orca no-go zones seriously. In fact, we watched as an enforcement boat approached a fully-loaded whale watching boat and issued some sort of warning. The whale watching boat backed off, and quickly left the area.
Local volunteer groups like Straitwatch also monitor whale watching vessels to ensure that they obey the rules.

We didn't stay on site for long as it had taken well over an hour to get here and we needed to head back. 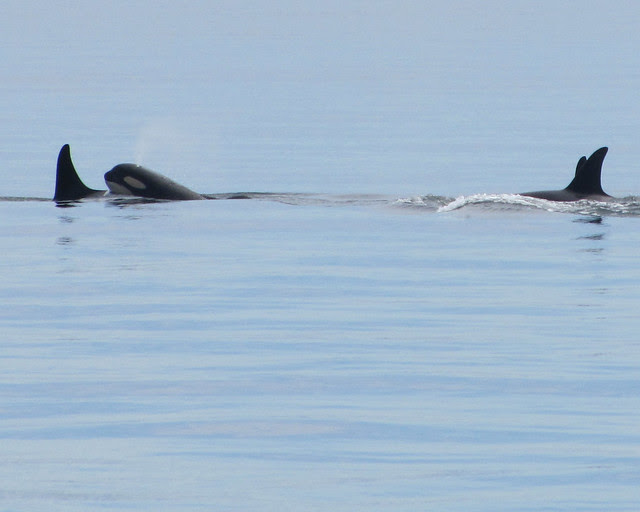 We left these magnificent creatures frolicking for other tourists and returned home. 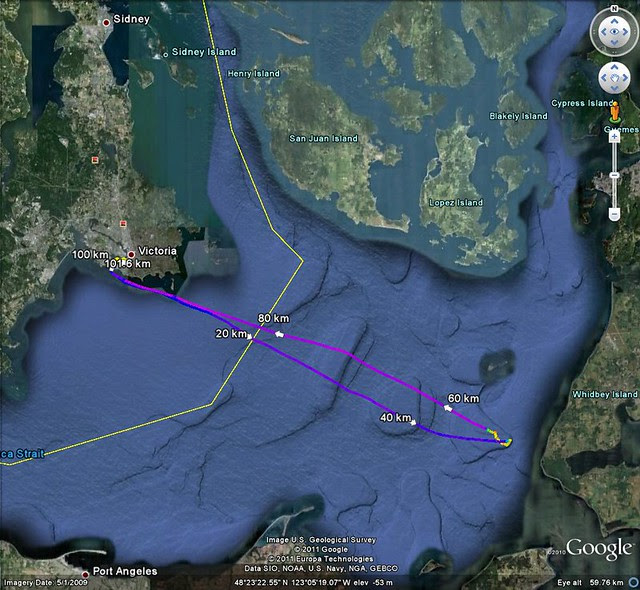