A Little Bit of Everything

Louise and I planned to kayak with Paula today, but Paula had an early afternoon social engagement to attend, so it looked like the three of us would just have a quickie around Cadboro Bay. We wanted to take full advantage of the first full weekend of summer, and we're happy to report that "Summer" is finally living up to its name. Sunshine and warmth, but not too warm. Just right. I felt like Goldilocks. Where's my porridge, dammit?

Paula was saying last night that her kayak wheels weren't working very well. I dunno -- they looked like they are working fine this morning. 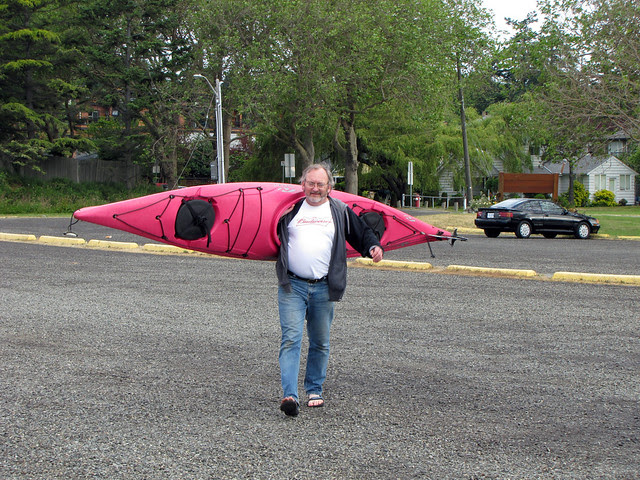 As the mostly blue sky shone down on us, we headed out. 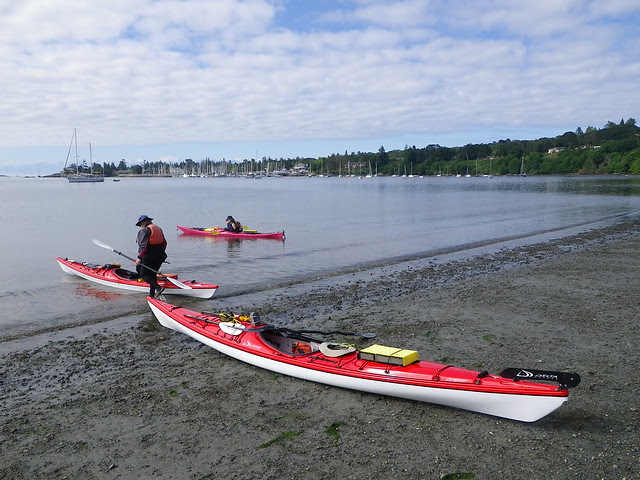 Louise continues to like the results of the Delta Fit Kit I installed at the beginning of the month. She feels much more snug and secure in her boat, and that's a good thing. For those of you keeping score at home, she is still at one pad on each side and seems comfortable with that width, so I don't think we'll be making any changes to it. 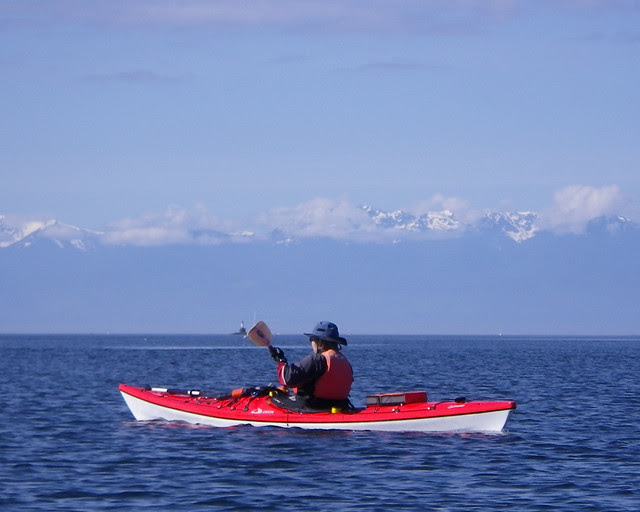 I scooted along the northern shore of the bay while Louise and Paula stayed offshore on a more direct route. Just as we met up, I saw a splash in the water ahead on me and noticed three otters scamper out of the water. As they ran over the rocks, I reached into my cockpit for my big camera, but it slipped out of my hands as the otters crossed over a ridge. I hadn't seen any otters since our New Year's Day paddle, and was disappointed that I'd missed a chance to get a couple of shots. However, as Louise and Paula rounded the next small point, they saw the otters taking shelter under an old concrete boat ramp. 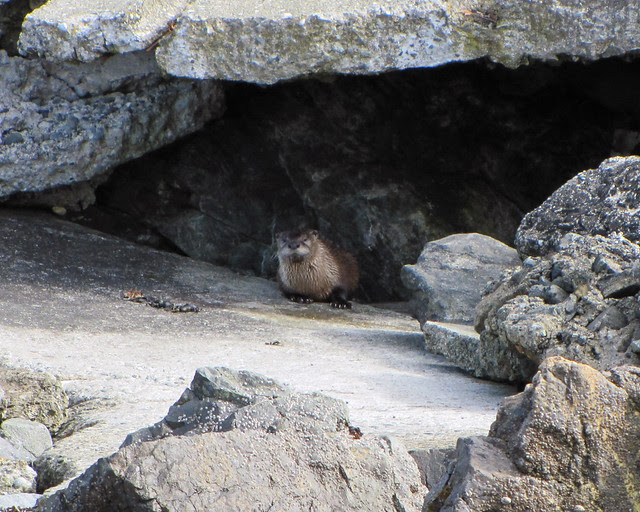 After a few minutes, they decided it safe to leave their shelter and resume foraging. 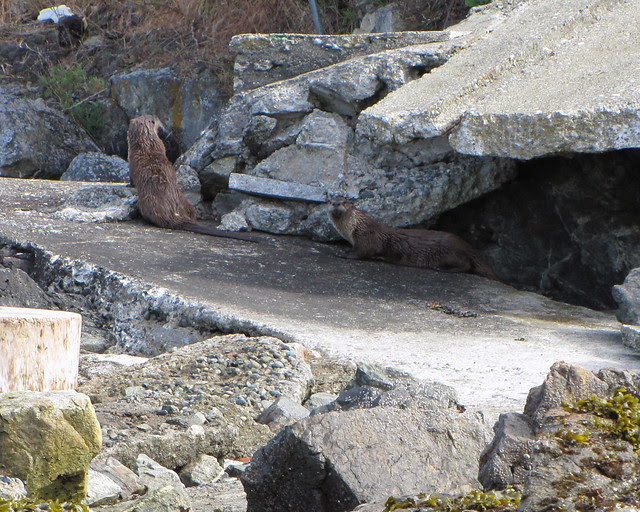 We paddled out first to Flower, then to Jemmy Jones Island, the stepping stones one would take before crossing to Chatham Island. 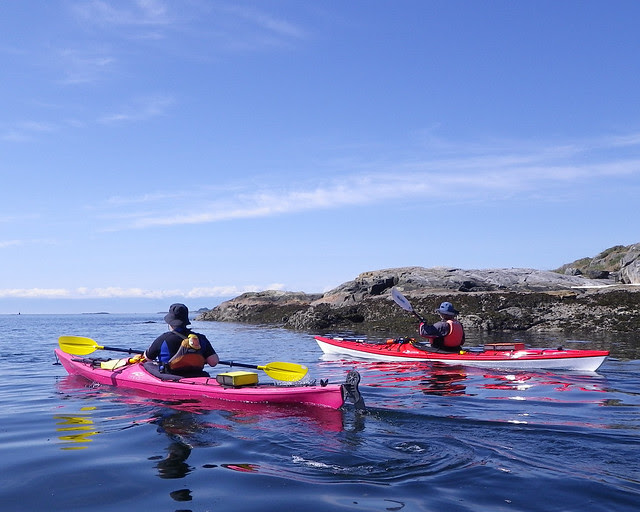 We weren't going to Chatham today -- we didn't have the time -- but it always seems like a disappointment when we don't make the crossing, but as we turned around at Jemmy, I saw something land back on Flower Island. 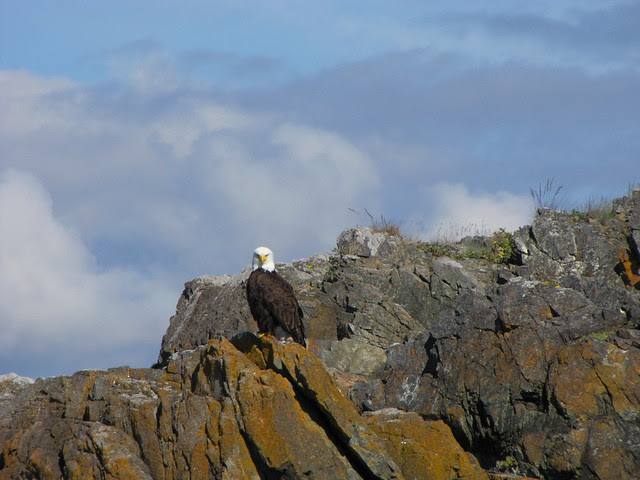 We hadn't seen many eagles so far this year either, so this was pretty cool. And so was he, especially as we moved in a little closer. 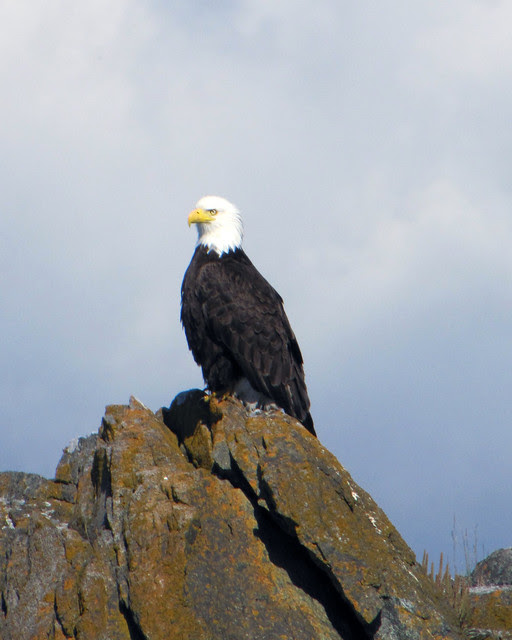 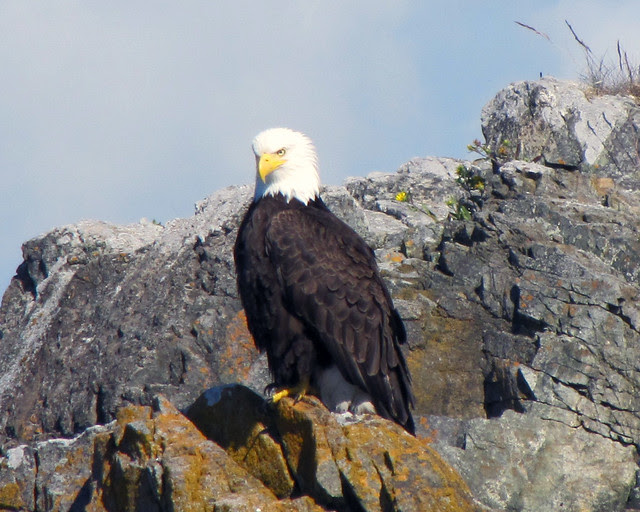 Suddenly, there was movement near the eagle. We looked and saw a mink scurry between some rocks! Well, either a mink or a big furry rat. We're going with mink. And I've never seen one of those around here before!

Crossing to the southern shore of the bay, we meandered around the rock garden off of the Uplands district. I spotted a goose family with some baby geese, although on closer inspection, they looked more like teenage geese. 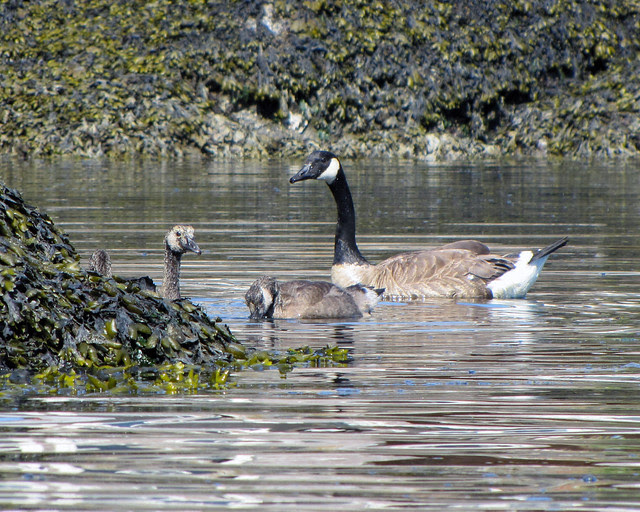 Behind me, Louise and Paula were watching a life and death struggle between a seagull and a crab. The crab appeared to be winning as it had managed to latch itself to the seagull's breast with one claw and while dangling there was reaching up with his other claw trying to grab the seagull around the neck. The seagull seemed at a loss as to how to proceed, but finally shook the crab loose. As I returned, it appeared that the crab's efforts to escape were in vain. 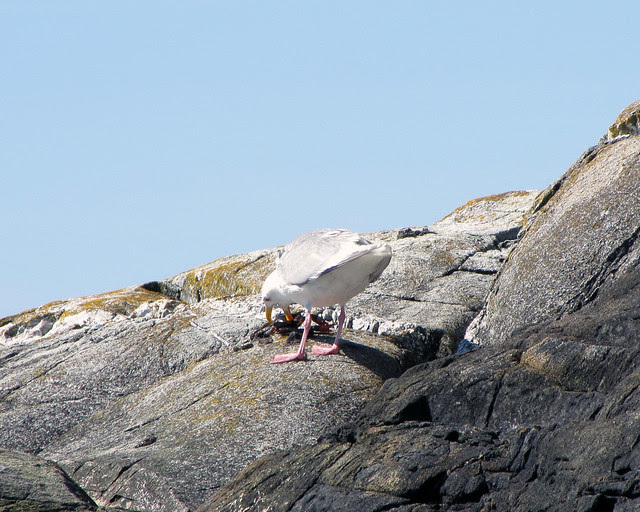 As we started back, we saw another mink! We began an inventory of all the animals we'd seen so far. Apart from a couple of overflights, we hadn't seen any herons, but as we poked our nose into Loon Bay, a lone heron was staring intently at something.... 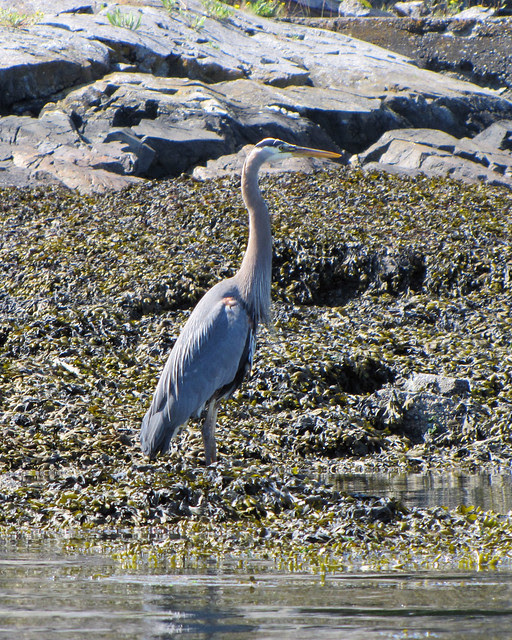 ...which turned out to be another pair of otters coming out of the water. 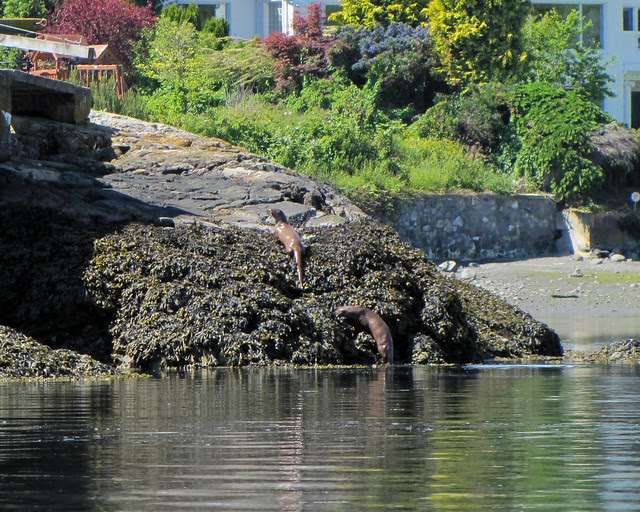 We fished an old fire extinguisher out of the water.... 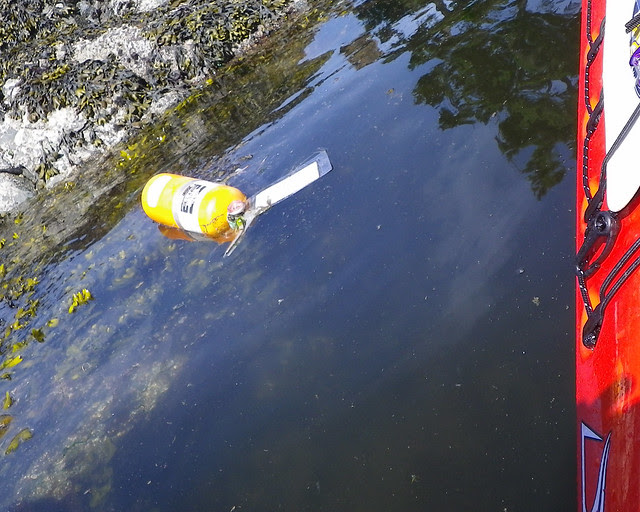 ....and continued paddling along the shore. We couldn't believe how much marine life we'd seen on this short paddle. 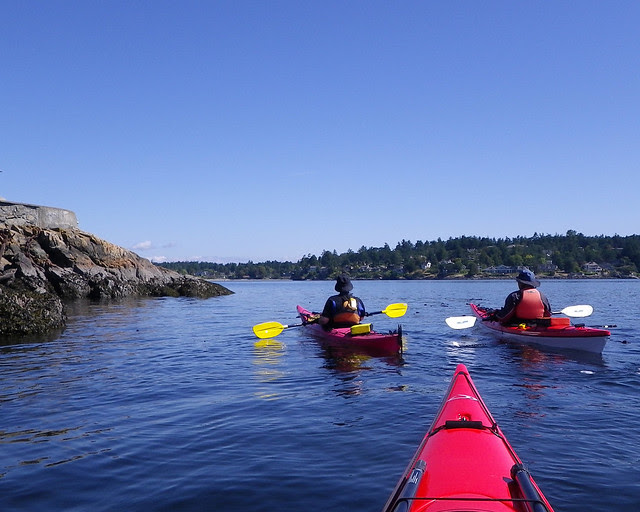 "A seal," I said. "We haven't seen any seals yet." Louise and Paula murmured in agreement. Not 20 seconds after I spoke, a little seal head popped up. We all laughed as the seal dove under the water quickly, but the seal didn't dive deeply and instead slowly swan just below the surface towards us and the the rear of my kayak. I blindly aimed my camera over my shoulder. 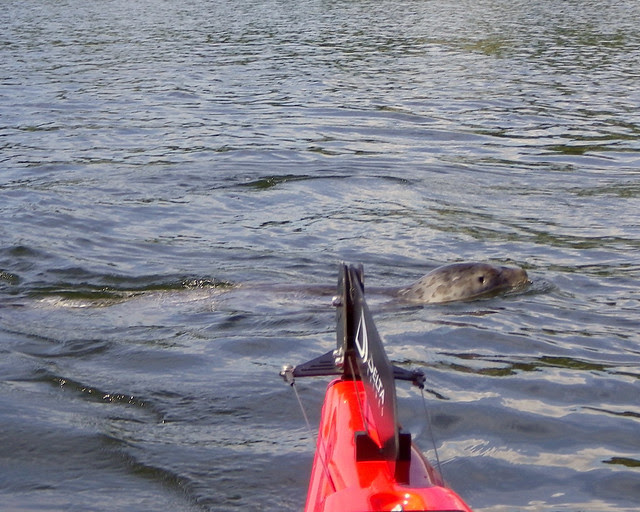 The seal surfaced and gently bumped the rear of my kayak, then moved over and bumped Louise's kayak. It was a small seal, probably a juvenile waiting for its mother to return with food. Eventually he realized his mistake, and he soon moved away.
What else could we see on this paddle? "A pod of killer whales!" I shouted. But no, we were in three metre deep water and less than 500 metres from shore. No killer whales. But that was hardly a disappointment after this great paddle. 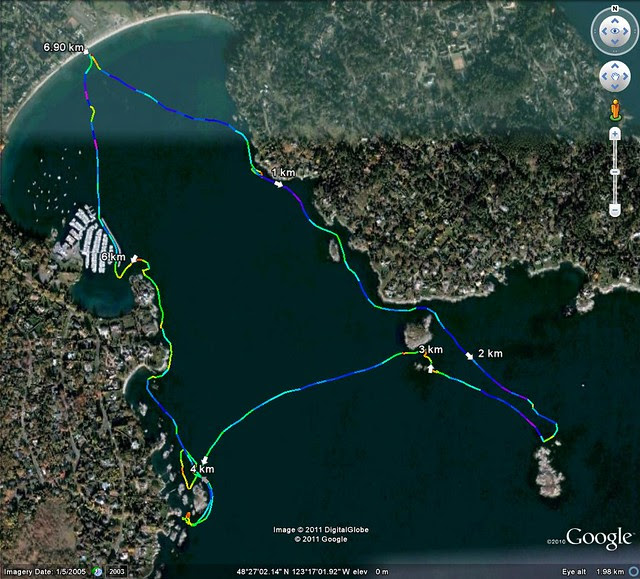