I'm about to blow my own horn here. Turns out that I'm not quite the fashionless goob after all.
True, I have the fashion sense of an aging hippie outdoors freak, and the finely-honed body of a freelance writer. This combination of interests and anatomy has led to such outfits as the merino wool Icebreaker shirt worn with MEC's River Pants, Teva sandals with merino socks, a fleece vest made from recycled pop bottles, a bicyclist's wind shell, and frequently a bandana tied around my forehead to contain a migraine.
Migraines have been induced in my fashionistas at the sight. They have fallen into despair not because I assembled such an outfit, but because I have worn it an appalling number of times over the last few years. In public. Not just while kayaking, either, but to Olive Olio's coffee shop, the grocery store, the library, friends' homes and the movies.
Despair not, O my fashionistas! You know who you are. And for those who don't, look through the Kayak Yak website for photos of Marlene and my grown offspring, Lila and Ben. Their advice has always been reliable for me. If you can't trust a woman who is both taller and thinner than a Greenland kayak paddle, a professional photographer and model, and a man who hand-sewed his own shirt from army surplus camo and fishnet stockings, well, who ARE ya going to turn to for fashion advice? And all of them have been out paddling with us at various times, so we have photos of them in PFDs and merino wool and so on.
My fashionistas need not fret any further about my sartorial splendour, or lack thereof. I have photographic proof that in at least one instance, my fashion sense and personal grooming overlaps with no less a fashion giant than... Lady Gaga.
No fooling.
Look at the photos of Gaga at the CFDA Awards on June 6, 2011. I direct your particular attention to the turquoise-blue hair bobbed around her ears. Here's a pair of photos taken by Andrew Walker that ran on the New York Fashion website. 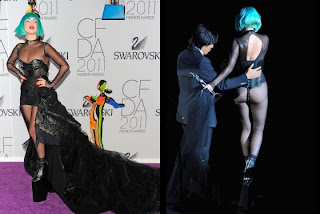 Now, look at the photos of me at the Ocean River Gear Grab on March 15, 2008. Here's one of the shots that John took, showing Louise and Richard unimpressed by something I'm yammering about with enthusiasm. 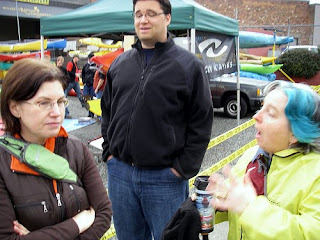 I humbly suggest that not only did I have the same colour hair as Lady Gaga, but that I sported the look some three years before she did. So there.
Don't anyone point out that it's ridiculous to compare myself with a fashion giant when I'm barely five-foot-one in my bare feet. I'll counter that jibe with the fact that so is Lady Gaga. It takes those odd heel-less platform boots to jack her up to Marlene's height. And hey, I wear black a lot, too.
Any comments about the round bottom showing in either series of photographs will not be dignified with a reply.
Posted by Paula Johanson at 8:00 pm