A beautiful Sunday morning dawned. Finally, some sunny spring weather arrived to chase away the winter blues, even if only briefly as the rain is due back tomorrow.
The only drawback was that the winds were forecast to pick up over the morning. It was only Louise and myself today and we had originally planned to go back to the Coal Island area near Sidney, but since it was just us and the wind was due to come up, we opted for Plan B: a trip into Portage Inlet.

We put in and and paddled under the Admirals Road Bridge. 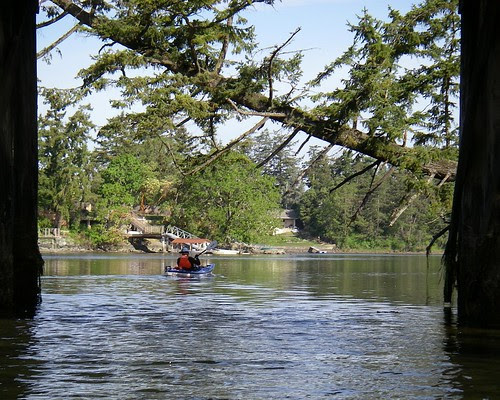 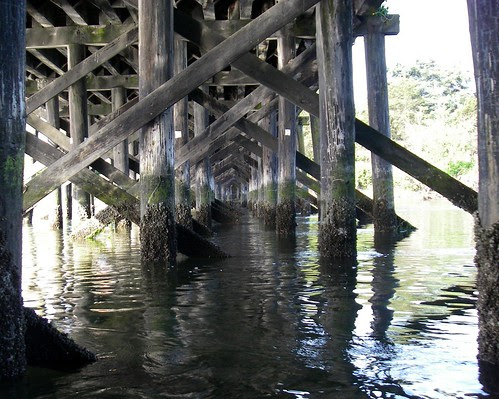 There were lots of geese about today, and many of them spent their time honking. 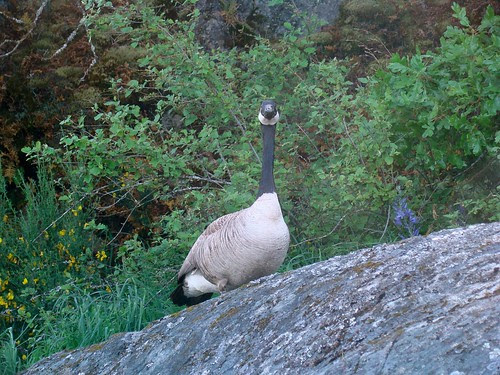 We paddled around the point into the far arm of the Inlet. We were hoping that we'd be able to paddle up the two creeks that empty into the Inlet, but the was tide was very low and we discovered that we would ground before we entered the creeks. 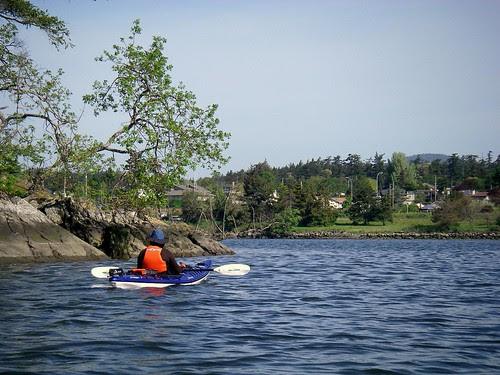 But before we tested that theory, I looked behind Louise and across the Inlet. Two swans were at the far shoreline. This was a good sign, as the three swans that had called this area home (and we saw on this previous paddle and this one) were electrocuted last year when they landed on some power lines over the Admirals Road Bridge. But another family of swans has apparently taken up residence. I pointed them out to Louise and we slowly crossed towards them. Then I noticed that there was something small with them.... 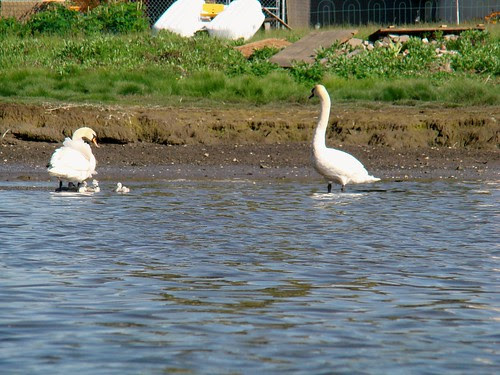 .... six little baby swan chicks! We drifted slowly until our boats quietly beached and watched the family. Those swanlings sure are cute! 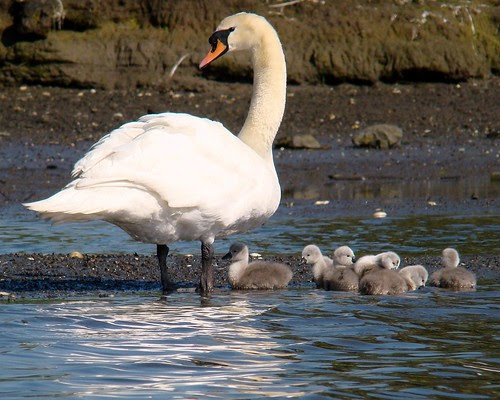 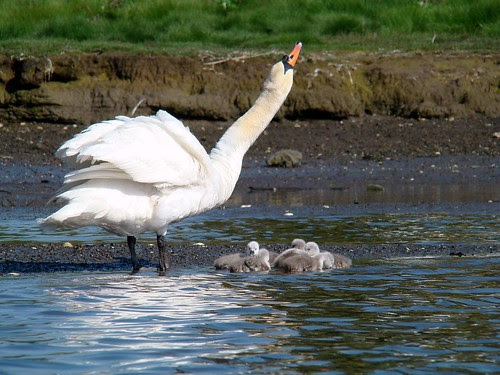 They didn't seem to mind us being there at all. They just played in the water, oblivious to our presence. 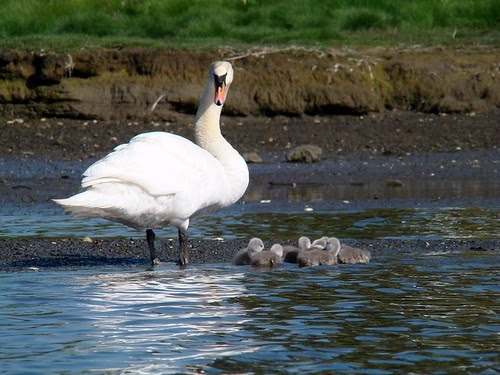 Finally we tore ourselves away and continued down the Inlet. We finally grounded in the area where we've seen those strange egg sacks the last two autumns, but we didn't see any today. We did discover some shells that appear to be walking -- you can see the trails they are leaving behind them. The area was covered with them. 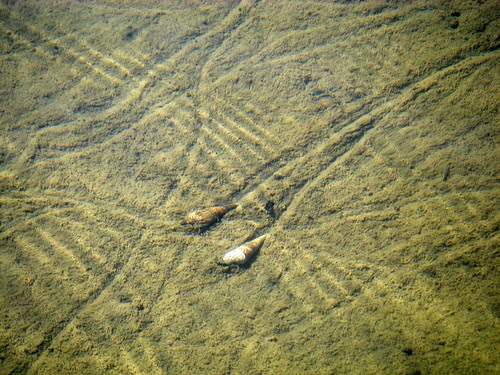 As we returned, we saw that the swans had hit the water for a swim. 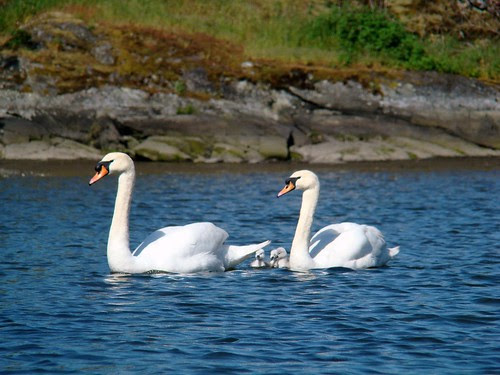 The swans were being watched by this eagle. He eventually made a half-heartened attempt to score a little lunch, but the swans saw him diving and they honked and flapped their wings, and the eagle returned to his tree for watch for easier pickings. 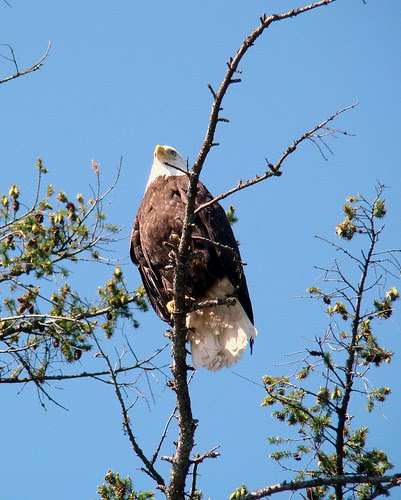 He began watching with interest this family of geese swimming up. With only one gosling in tow, we wondered if the eagle had already introduced himself to this family. 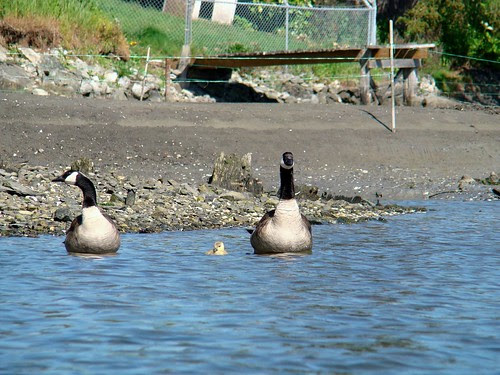 In the end, everyone reached where they were going safely. Interestingly, after the eagle made his attempt on the swans, they regrouped and changed course right for us. We figured that the swans thought that we seemed friendly, and being much bigger than the eagle might dissaude him from another attack. 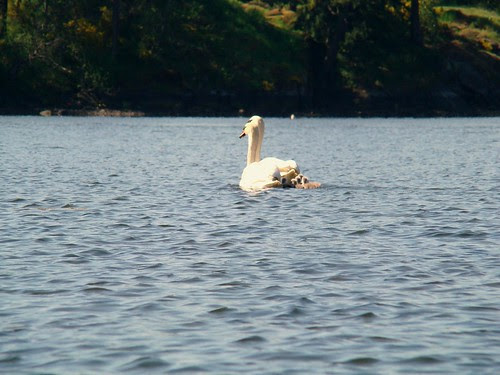 And finally as we headed back, I totally blew this cat's mind. I spotted him on the rock wall, and turned towards him to get a picture. His eyes widened -- there's a person out there! And...he can see me! 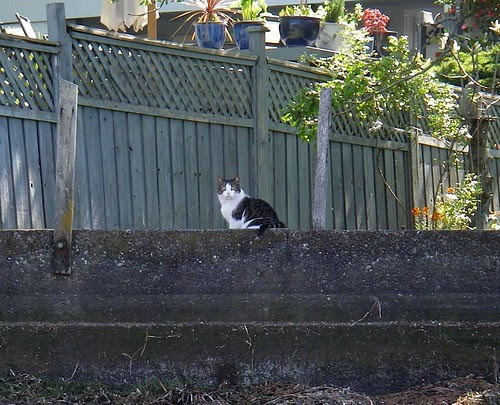 The poor cat didn't know what to do! I imagined the little feline wheels turning in its head! I've been spotted! What should I do? There's only one thing left! I better make myself small! 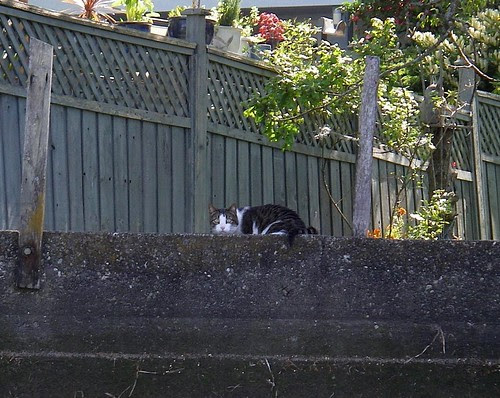 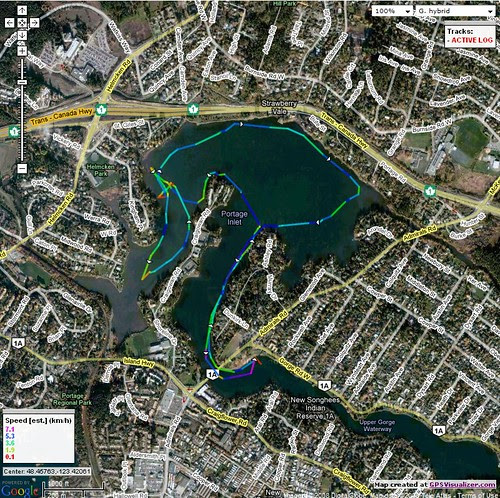