We've previously mentioned the SPOT Satellite Messenger, a handheld device that can send an emergency signal over satellite to rescue services. It's a nifty gadget and should be considered as part of your gear, especially if you're doing a lot of distance paddling. Paula's considering getting one for her Red River trip in August.
According to an article in the latest issue of Adventure Kayak magazine, the first sea kayaker (and first Canadian) to use the device in an emergency was Derek Crook of Nanaimo, BC, while he was kayaking in Australia. Crook, a well-known and highly experienced kayaker, was solo paddling around Tasmania when he was slammed by huge waves and tossed out of his kayak. He tried to re-enter his kayak for three hours, but to no avail. And since Crook invented the paddle float counterbalance, you know that the conditions must have been insane if he could not re-enter his kayak. He got out his SPOT and pressed 911.
The article continues:


"While Crook clung to his boat, Globalstar's Texas based dispatchers scrambled. They phoned his wife in Nanaimo, the Canadian Embassy in Australia...SAR crews were on scene an hour and a half later." 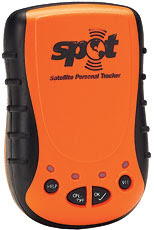 Crook was released from hospital two days later after treatment for hypothermia. His kayak washed up in pieces 24km away.
Posted by John at 6:54 pm