Return to 15 Minute Island...and Beyond

This Sunday we decided to return to Brentwood Bay and paddle into Saanich Inlet, but instead of our usual southerly route past Tod Inlet and towards Squally Reach, we decided to head north towards what we call 15 Minute Island. 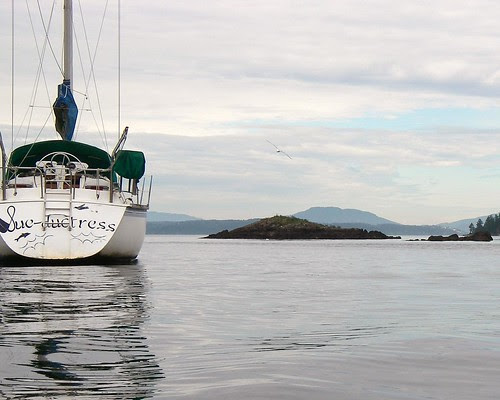 It was Alison, Louise, Richard and myself today. Alison arrived a few minutes early and went for a little solo jaunt towards Tod Inlet before the rest of us arrived. As we all headed out later, we tried to pay her a dollar if she would paddle under this sailboat.
She declined. 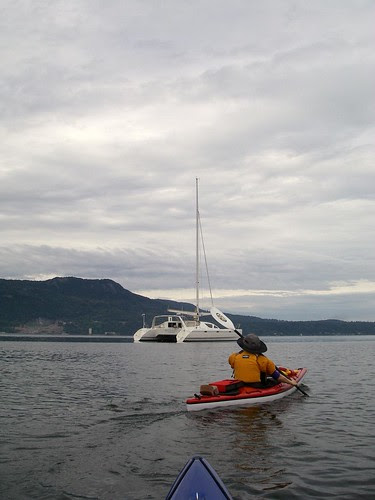 We paddled past this seagull on a buoy. We were making a lot of comments about how fat the seagull must be to make the buoy tip like that. Then the seagull took off, and we realized that the buoy was actually stuck in that position. 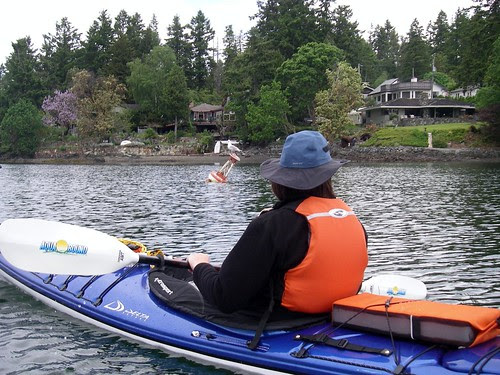 This was Richard's first trip to 15 Minute Island. It's actually part of a nearby First Nations reserve and called Senanus Island, but we call it 15 Minute Island because on a previous paddle south from Coles Bay, Bernie suggested that we paddle to it.
"It looks only 15 minutes away," he kept saying. The problem was that after every 15 minutes of paddling, it still looked 15 minutes away.
The first time we decided to make it a paddle destination, it took us a lot longer than 15 minutes to get to it. Today, it took about 15 minutes. Either we are improving at this kayaking thing, or we had a helluva current pushing us today. Richard is trying out his latest gadget. It gives him the windspeed and tracks the barometric pressure. It's funny how now I suddenly covet something that I had no idea existed before today. 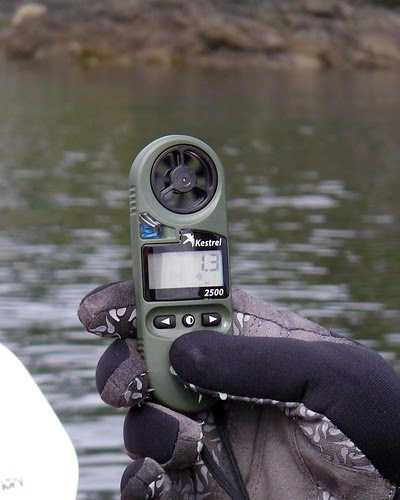 As we went around the far side of the island, we saw some oystercatchers. Presumably they were catching oysters. 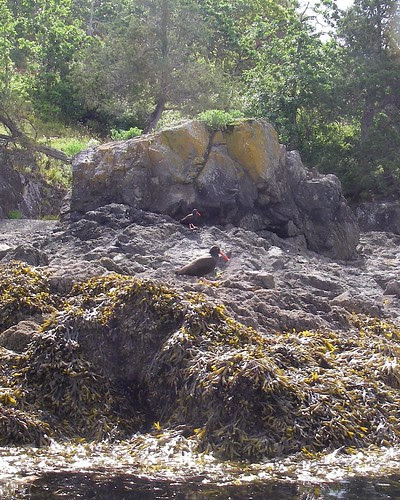 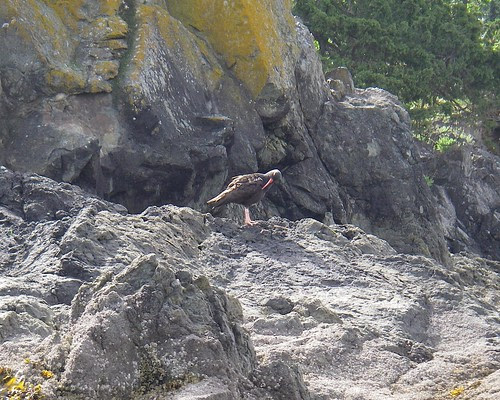 We passed the lighthouse on the northern point of the island and crossed back to the shore, continuing north. We watched a seaplane practise some "touch 'n' gos," and the occasional seal popped up and followed us for a moment or two. We were passed by a large pleasure boat and we all turned to charge the wake. It was a little higher than we expected and we each caught some air. That was fun! 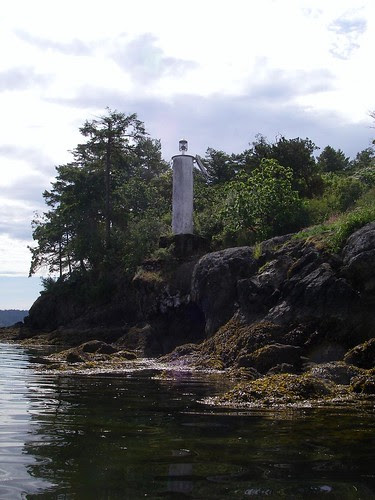 We passed Coles Bay and went as far as the entrance to Patricia Bay. The jets were coming in over Saanich Inlet today, as evidenced by this WestJet 737 on final approach. 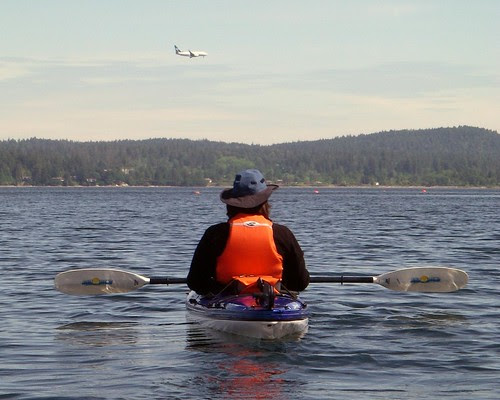 We turned around and headed back. Richard is the fastest of the group, and Alison and I decided to see if we could draft off him. I'm not sure how well this worked with three kayaks, but I've tried with two, and when I'm the second kayak it sure feels to me like it's less work paddling. 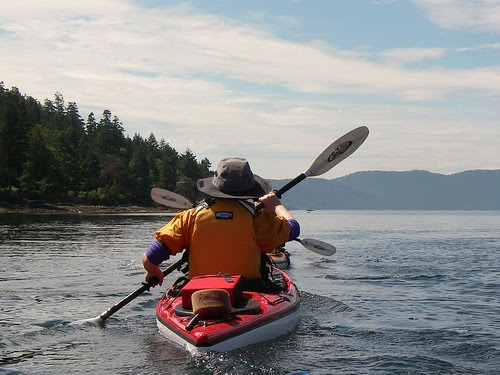 However, Louise set her sights on some divers. We heard her laughing maniacally. "Finally, we get to run over something! Who's the fricking speedbump now?" 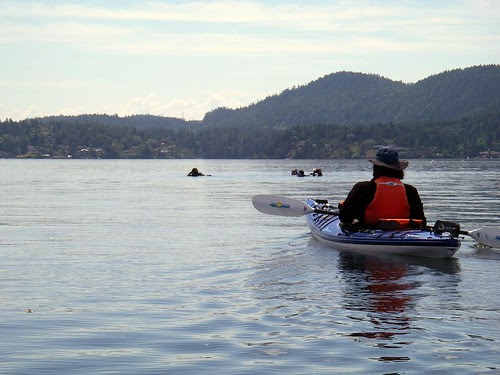 As we approached Brentwood Bay, we watched eagles flying along the shore. Finally one settled into a tree. 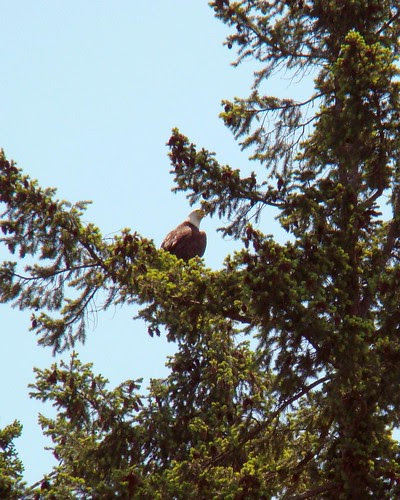 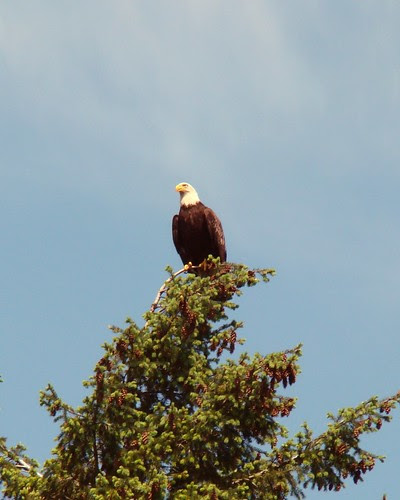 And the paddle comes to an end. 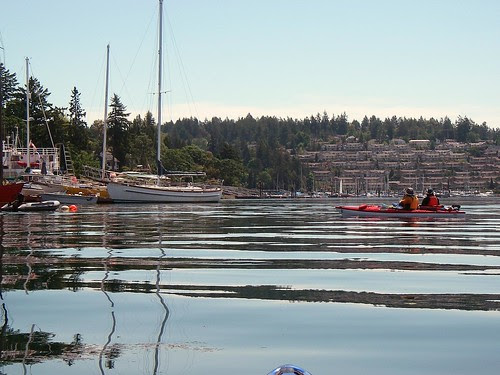 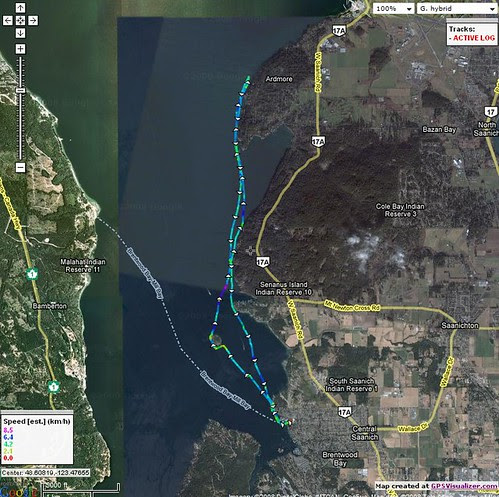