The following open letter was posted on the Ocean River blog from Tim Houlihan of Save Victoria Harbour, an umbrella organization helping to protest the planned mega-yacht marina in Victoria Harbour. The Provincial government has now approved the Marina plan and will lease the water lots to the developer for the pricey sum of $24,000 -- annually. Yes, a huge chunk of Crown Land (or seabed in this case) that is undeveloped, unspoilt and picturesque AND IS OWNED BY YOU AND ME will be frittered away for a pittance. $65.75 a day. Okay, if the government has its heart set on spoiling this jewel of a harbour, making it damn near impossible for paddlers and rowers to use, and to promote an industry that relies on the burning of massive amounts of fossil fuels, well so be it, but at least let's get some money for it. $24,000 a year -- are you serious? It's no wonder they introduced the Harmonized Sales Tax, they're selling our province away for a song. No, even less than a song...for a verse and half a chorus.
Tim's post follows below: 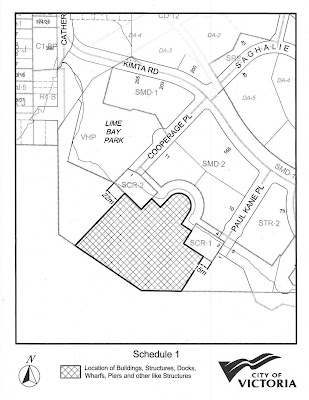 Despite no approvals from Transport Canada on the Victoria Harbour Airport safety and the with no permit from the Minister of Transport to condone the “substantial interference” to navigation that the proposed marina will create, the BC Government has as of June 23, 2011, offered Community Marine Concepts a lease on the waters that is needed to berth the large vessels on what is now the “non motorized zone ” in Victoria Harbour. Developer’s cost in initial year $24,000.
The detailed information about the offer to lease, and its terms and conditions will not be made public except under a Freedom Of Information request. This request has been made and denied.
Prior to making the offer to the developer, Crown Lands, extinguished the title on the large lot off the Songhees. In doing this, the BC Government, by Ministerial Order, removed the opportunity for a subdivision approving officer at the City of Victoria to call the only public meeting that could be held by an approving body to assist in determining just what is the public interest. I’m sure that all of us would be at City Hall again to say NO! Mega Yacht Marina!
Where are we?
If the Federal Minister of Transport hasn’t made a decision in August of 2011, the Crown Lands people are operating on an indefensible grounds when they claim that, based on their evaluation of the input between Dec 2009 and April 2011, they have accepted a “public paddling corridor” which denies access to the larger human powered vessels today, and will, as water levels rise make the “paddling corridor” under the two concrete platforms more and more inaccessible for even the vessels like kayaks.
How can Crown Lands have made a determination that is in the Public Interest and assume that the non motorized zone of the Victoria Harbour Traffic Scheme will be re-zoned for large yachts when they have not received the final Environment Canada report nor the report on Air and Marine Safety, much less a permit to permit “substantial interference” with navigation, nor have carried out the consultations with “stakeholders” who use the non motorized zone?
How can Crown Lands have made a determination to offer a lease when shared studies of the Environment are not available. Have they used the studies that are subject to the Judicial Review which was adjourned when Transport Canada withdrew the contested Navigable Waters Permit?
Why?
In my opinion, it is obvious that the Crown Lands part of the BC Government and Transport Canada, both of which treat applicants as if they are Government Clients, have not considered the public interest, only the interest of their clients.
What to do? Ask for help!
1. As a human powered vessel user, ask these questions to the Attorney General of BC and the Minister of Justice of Canada. Crown Lands policy says that they are the elected officials to protect the rights of people like you and me who share these waters with the commercial air and marine users.
2 Explain to the Attorney General of BC and the Justice Minister of Canada that, as the operational departments of the BC Government and Transport Canada, treat the applicant -as client, you want the Attorney General of BC to intercede for you as a citizen of Canada and BC and protect these shared rights. Ensure that the non motorized zone of Victoria Harbour remains.
Please write now:
Attorney General BC
Honourable Barry Penner
PO Box 9044 Stn Prov Govt
Victoria BC V8W 9E2
Phone: 250 387-1866
Fax: 250 387-6411
Posted by John at 3:05 pm