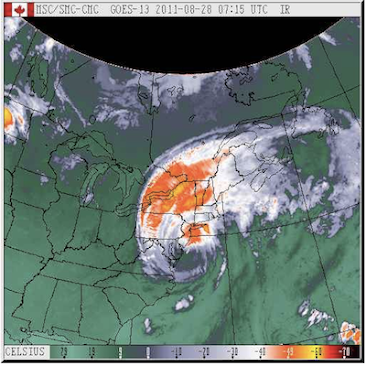 We caught the trailing edge. Cumulative rainfall was 56.4 mm over about 12 hours of August 28, with an additional 1.6 mm on August 29. Compared to some of the totals to the east of us, that was modest, and Environment Canada never did grant us more than "light rain" on our hourly assessments. Wind speeds fell short of the 90 kph on our wind warning, though they were impressive enough (see below). I don't have the corresponding hourly rainfall data, or that would be on there too. Temperature started around 20 and gradually drifted down to 13/14C. I missed checking the wind and rainfall records for August 28 on the day itself, and haven't yet found my way into that particular archive.

The force of the storm was much more palpable towards the east of us: much more rain, more wind, more damage, and, unfortunately, loss of life. 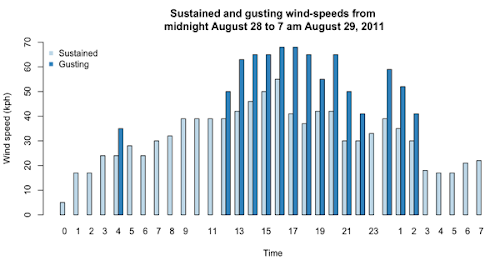 Kayakers gained an unwelcome notoriety thanks to a couple of NY paddlers who had to be plucked from the bounding main by the New York harbour patrol on Saturday morning. NY Mayor Bloomberg was not impressed.
On the other hand, as the skies cleared, people have been discovering how useful a kayak can be, in certain extreme circumstances.
Which I hope we won't see again, for a long while.
Posted by Alison at 5:24 pm