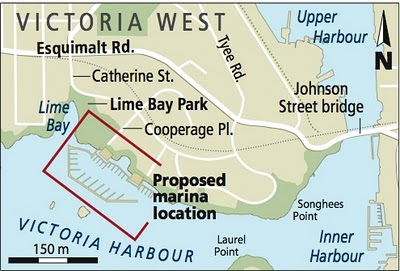 With a major anti-marina rally coming up in two weeks, the rhetoric on both sides of the Mega-Yacht marina proposed for Victoria is heating up.
“We certainly will be protecting our riparian rights as the landowner,” Victoria mayor Dean Fortin said yesterday, referring to city-owned Lime Bay Park, at the foot of Catherine Street and Cooperage Place. Victoria maintains it holds riparian rights, which refer to the right to access its land from the water. “We also think, in the larger sense, that the size and scope of the current marina will block views, [and] diminish both the esthetic and functional values of the park. And we believe the public has an expectation of unencumbered views from parks, especially on the waterfront.”
The city is calling on the federal government to conduct such a risk assessment to ensure any potential risks are identified and strategies are in place to address those risks. He told CFAX 1070 radio that the City has serious concerns about the movement of large yachts in and out of a marina seeing that the harbour is already busy with commercial marina and air traffic.
What does the developer think of all this? Bob Evans, partners with WAM Development Group in the Victoria International Marina project, is threatening to sue the city if he doesn't get his way. “We knew that the city was going to try and come up with something and I think that they are putting the taxpayers very much at risk here.”
Many local kayakers are against this project. And according to this admittedly unscientific CFAX online poll, most everyone agress with the City's position.

Click here to help stop the marina.
Posted by John at 8:57 am