Attending the Rally On The Water

The rally against the Monster Yacht Marina was a blast!
Hopped on the #11 bus with Bernie carrying my Dragonfly inflatable. He also carried it from Douglas & Yates across the Johnson Street Bridge to our usual harbour launch site at Songhees. Easiest portage I've ever had, thanks to Bernie.
Weather cooperated splendidly, with little breeze and a nice bright overcast with only a little mist, no real rain after 9 am. SISKA paddlers got there early before everyone else, and set out some buoys to show the size and shape the Marina would take. I got there just after eleven am, and there were loudspeakers going mwa-mwah-mwa (picture bassoon music from the old Peanuts cartoon shows, eh?). I think that's when John got this great shot of me, in which I appear to be The Happiest Kayaker On The Water Today. 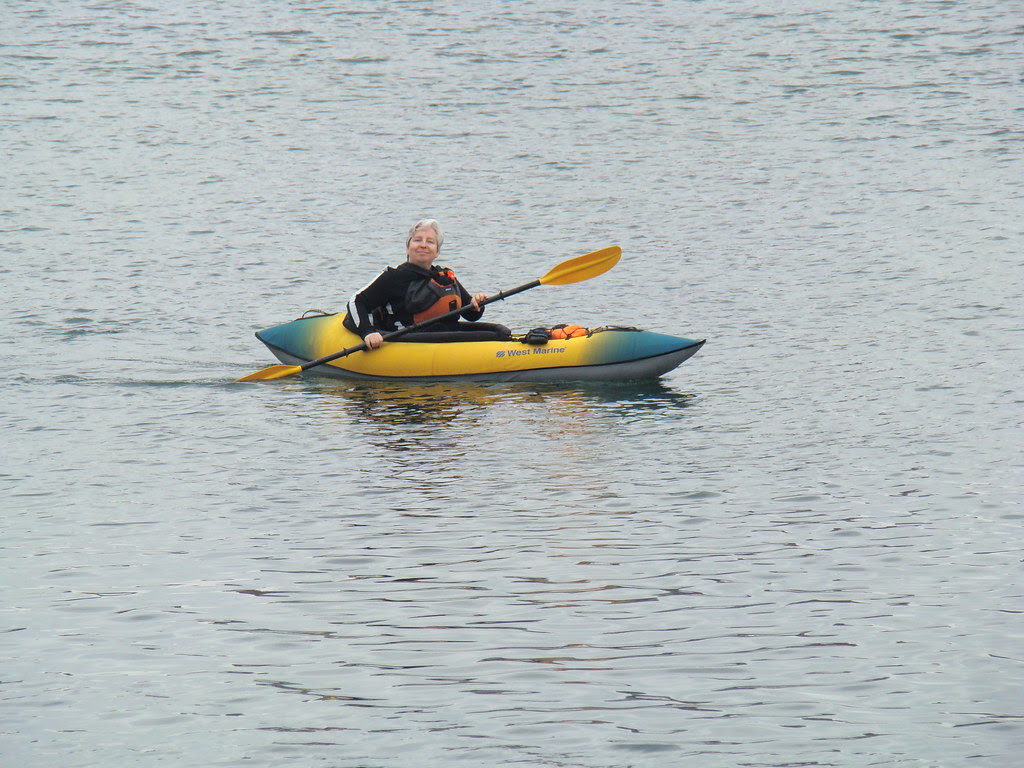 The turnout was great, with about 200 kayaks milling about the area where the Marina is proposed. Gee whillikers, that would be one honking big marina if it ever did get built!
If you check out the Times-Colonist's report on the rally, you can see a fine aerial photo of the gathering. See the two little kayaks beyond most of the boats, close to shore over towards the little dock? That's Mike Jackson in his black Tahe and me in the Dragonfly, at one of the marker buoys. With me to mark that perimeter spot, he headed out to move through the crowd, making sure that less-experienced paddlers were having no problems.
Meanwhile, there were a series of boaters coming over to me, each of whom expressed admiration for the little inflatable. Two of the harbour patrol boats and a little harbour ferry all snuck close, and the captains leaned out to get a good look. I told them all to go to Advanced Elements and learn about the boat and its big brothers.
The rally broke up like most demonstrations in Victoria... everybody looked at their watches, picked up their litter and headed away peaceably. By the time I got back to the Songhees park launch, there were Bernie, John and Louise, and Marlene. Great to have such a big crowd crew!
Posted by Paula Johanson at 7:33 pm