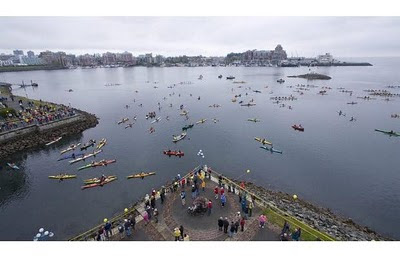 The giant mega-yacht marina propsed for Victoria's Inner Harbour passed its first hurdle yesterday as a Transport Canada spokesman announced that "Transport Canada and the Department of Fisheries and Oceans have concluded that with the proposed mitigation measures, the project is not likely to result in significant adverse environmental effects and that the impact on navigation can be mitigated."
According to the Victoria Times-Colonist "the proposal has run into opposition from a range of groups, including paddlers, environmentalists, owners of high-end condos and others. A 7,000-name petition against the development was sent to various levels of governments. Marina critics argue the development would compromise safety, views, the environmental and attractiveness of the city’s harbour." There were over 400,000 movements in the harbour in 2007 and some worry that adding large mega-yachts trying to enter the proposed 2.63-hectare marina will congest an already small and complicated harbour.
With the environmental report out of the way, the next decision on the Navigable Waters Protection Act approval and the Fisheries Act authorization will be made shortly.
After that, the next step in the unpopular development will be whether the province decides to grant the developer a license to use the provincial water lots (and the provincial government does have a habit of forcing unpopular items down peoples' throats. See the HST.) The devloper will then have to seek a development permit from the city for the marina's on-shore facilities, which may prove to be a struggle as Victoria's mayor has already publicly spoken against this proposal.
Meanwhile, some opponents, such as Victoria MP Denise Savoie, are already talking legal action against the development. The Times-Colonist also reports:


"We are going to be looking at all our options, including legal," said [anti-marina] coalition member Diane Carr.
Carr is not surprised by the decision coming from Transport Canada, the lead federal agency examining the proposal. "But of course one always hopes for a result in the public interest," she said.
The process used to determine whether the marina belongs in the harbour has been a major issue for opponents, who say it is not transparent, comprehensive and did not take public concerns into account. "A poor process yields a poor result," Carr said.

Click here to help save Victoria's harbour.
Posted by John at 8:49 am