BC Transit to Experiment With Kayak Racks on Buses In Victoria

Following in the footsteps of noted commando kayaker Dubside, and our very own Paula, both of whom transport their folding/inflatable kayaks via transit bus, BC Transit, a leader in accessibility standards for public transit, is planning to outfit a number of local Victoria buses with racks for standard kayaks. The Victoria transit system consists almost entirely of low-floor buses for enhanced disabled accessibility and all of its buses are equipped with bike racks. The Victoria transit system was also the first in North America to add double-decker buses to its public transit fleet.
Now BC Transit is moving to the next level and converting some of its front-mounted bike racks to carry full-size kayaks. "We've been studying this idea for a number of years before we came up with the best system," said Transit spokesperson Kate St.Clair. "We first thought of mounting kayaks on the roofs of our buses, guiding them up with a pulley system at the back of the bus. It worked well, but through trial and error we discovered a number of low railway bridges and overpasses in town, and that eliminated the number of routes where we could offer this service."
A little more experimentation revealed that the solution was right under their noses. Or the drivers' noses, anyway. "We discovered that with some very simple modifications, our bike racks, which are already installed on all our buses, could take the weight of a fully-loaded kayak. Needless to say, we want to roll out this kayak rack service as quickly as possible to serve our loyal kayaking customers over the upcoming summer months. All we have to do are a few test trials, but we're very confident there will be no issues to deal with." 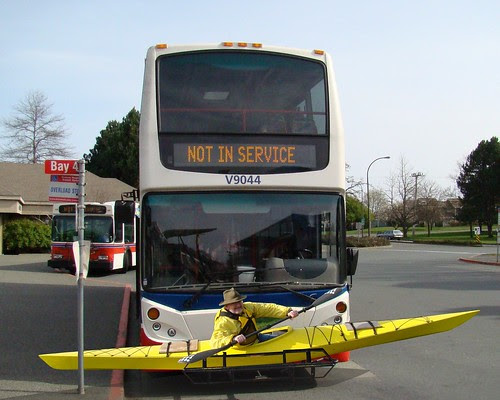