No, I didn't get up North or to Antarctica, to paddle either of the actual ice caps. Instead I got to try out a kayak model called the Ice Kap, from Sterling Kayaks.

At the MEC Paddlefest on Willows Beach, there was a terrific assortment of several models from Sterling Kayaks. Each is a custom job, with the foot pedals set to accommodate the paddler's own leg length, for example. While Marlena went off in the Discovery Island Shuttle that was giving free rides, I got to sit in an Illusion, but even with the footpedals run as far forward as possible, my feet still couldn't reach. That would be no problem if I bought one of their kayaks, explained the designer, Sterling Donaldson. He would put the footpedals closer to the seat for someone as short as me.
What a great experience, to meet the kayak designer and builder! He's got fibreglass under his fingernails and epoxy all over his hands, he complained at one point. But there's no substitute for the hands-on approach when customizing a kayak for someone who wants a day hatch sealed off from the big rear compartment behind the bulkhead.

The foam seats (Joe Greenley Custom seats) are a terrific support... lifting the knees a little and fitting around the butt. I'm guessing that my partner Bernie would find THIS style of seat causes way less pressure on his back and sciatic nerve. The seat back is good support for the pelvis, but low enough to encourage good rolling posture. On each side of the seats is a glassed-in support for foam padding, to customize the fit to the paddler's thighs.

But enough about the Illusion, which I never took on the water, as without footpedals I'd just be like a toddler wearing her daddy's shoes. I got into the Ice Kap! This is the boat that Dubside uses, when he's not commando kayaking with a folding kayak. 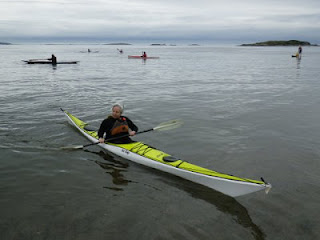 The Ice Kap is designed for smaller paddlers. The coaming is low. Low, low, low. As in approaching the waterline. As in half-way up my thighs when I'm seated in the kayak with feet on the pegs. No more rubbing my elbows on the coaming with each stroke! That happens in most kayaks for me, perpetuating the toddler-in-her-daddy's-shoes feeling. As the designer Donaldson pointed out, most shorter people are not only short in the leg, but have short backs as well. It's hard to roll a kayak when the coaming is up at your waist.
John took a photo of me on the water in the Ice Kap. It's pretty clear in the photo that this boat has a lot of rocker. I'm used to the rocker in my rotomolded Necky Eliza, which brings the keel up in the bow and stern and makes for a lot of fun in waves. The Ice Kap has more rocker, enough to bring the bow and stern up much higher out of the water than the Eliza. I expressed some concern about the front deck being so high out of the water, and the stern so high -- wouldn't they catch wind and weathercock? "None of our boats weathercocks," Donaldson insisted.
The Illusion has a similar hull to the Ice Kap, but the coaming rises a little higher at the paddler's thighs and sides. John didn't even consider trying either model. At 6'4", he went for their Grand Illusion that fits the 6'3" designer, but the model on the beach had been padded to fit a thinner paddler. No dice.

Louise tried the Ice Kap as well, just to add another model to her research for her new boat. We compared notes afterward. She's 5'4, I'm 5'1, and in our opinions:
-The Ice Kap is a sporty, responsive kayak that turns on a dime.
-It's well suited to people up to about 5'6 (I've met Dubside, and he's about the size of my son who is a lean 5'8".)
-Very small adults from 4'10" to 5'2" should definitely give this model a try, as it is suited to a paddler with short legs AND a short back.
-Very light adults should also try this model, as it's recommended for paddlers up to 165 pounds. I'm at the top of the weight class, and definitely felt BIG and MEATY in the Ice Kap.
-Though I have little or no sense of balance, that was not a problem as the Ice Kap fits the paddler like a fine shoe. The responsive feel was terrific, and allowed me to control the boat with confidence.

Afterwards, John and Louise changed out of their paddling gear while I just wandered around evaporating. One of the pleasures of commando kayaking is that my paddle clothes evaporate dry quickly. Should also give a shout out to John Kimantas, who said hello while promoting his magazine, and Mike Jackson who was there to roll and show his terrific Greenland paddles. The Discovery Island Shuttle came back, and Marlena teetered down the ramp, grabbed her coffee mug in both hands and drank half in a gulp. We piled into the Kiwanis tea house and waited a while for fries etc.

Our verdict: if you're a thin, short man or woman who is wanting an exciting kayak instead of a barge to noodle around in, get down to Ocean River Kayaks and try the Ice Kap in their rental fleet for a kayak suited to riding waves or rolling. If you're not thin, try the Illusion as the coaming is just a little higher instead of pressing on the sides of your thighs.
And if you're a differently-able kayaker (like every member of our paddling group, and plenty members of SISKA and VCKC and the entire crew of the Breaststokers Dragon Boat team), talk to Sterling Kayaks about how to customize a kayak to meet your needs. This designer understands. Other designers talk the talk, and come through as well as they can. Sterling Donaldson not only talks the talk, he walks the walk with one leg and crutches on the beach among his demonstrator models.
Posted by Paula Johanson at 10:36 am