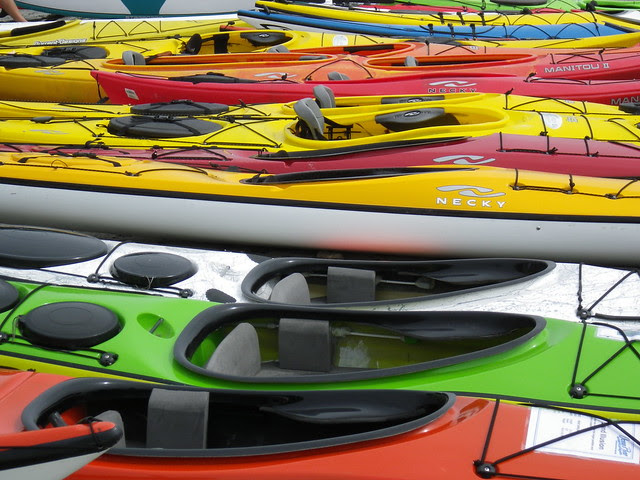 When Louise moved up from her Delta Fourteen to the Seventeen a couple of years ago, she did it with some trepidation. Although she didn’t mind the Seventeen, she much preferred the Sixteen; however the Sixteen was not yet in production and she had only paddled in the prototype. The Seventeen has a hard chine and Louise preferred the Sixteen’s rounder hull shape. However, there was no timeframe as to when the Sixteen would be available and in spite of her slight misgivings, she went with the Seventeen.
In hindsight, she should have waited. She’s never been entirely comfortable in that boat and therefore not entirely comfortable on the water. And after trying all sorts of tricks like padding out the boat, using weights to change the boat's balance, and self-hypnosis (okay, I made that one up), she’s decided it’s time for a different approach: buy a boat she likes better.
That task begins in earnest today, as we headed to the 2012 MEC Paddlefest Victoria to, among other things, test drive some boats.
Of course, much like last year's Paddlefest, the weather wasn't the best. We've been calling it June-uary, the coldest and wettest June in half a century in these parts. Why should the last day of the month be an exception? Heavy drizzle greeted the start of the day this morning, but even though the rain had stopped by the time Louise and I arrived at Willows Beach, we were greeted by something unexpected: fog. 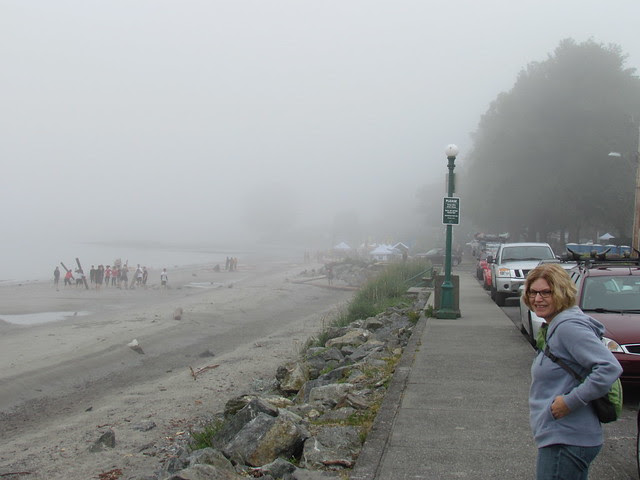 The weather was cloudy and and wet at last year's Paddlefest, but one could argue the fog this year made it even worse. But fog does burn off, sometimes anyway. Would it burn off today?
We soon bumped into Mark and Robyn (of the great Gecko Paddler blog) and together we quickly checked out what was what on the beach before Louise and I changed into our paddling togs. 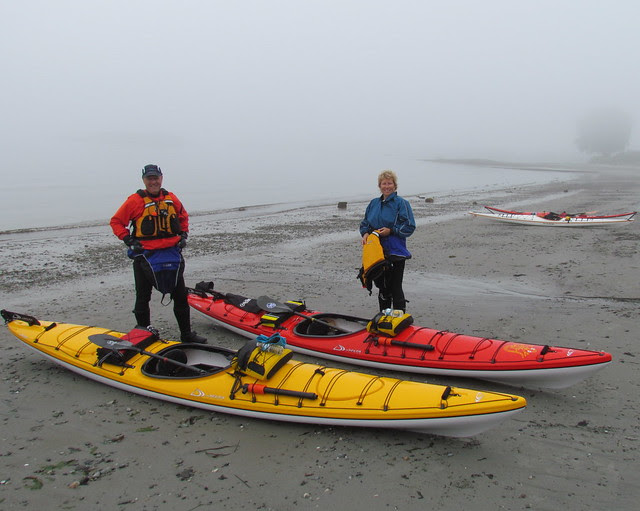 The first boat Louise tried was a Stellar S16. Brian Henry from Ocean River Sports discussed the boat with her. 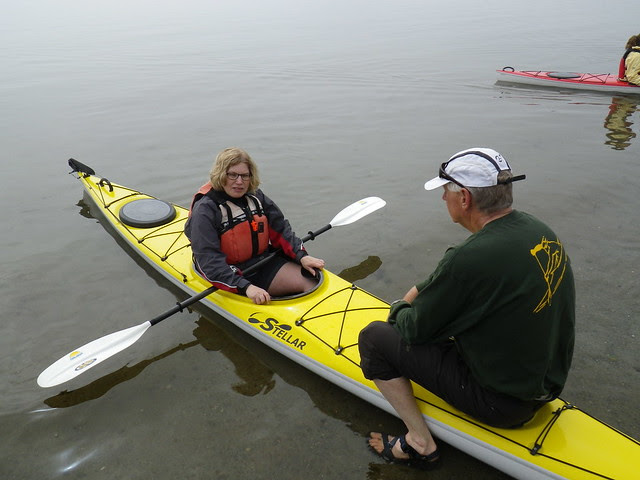 These are insanely light boats, but seemed very sturdy and well made. Carrying it to the water it felt as light as a feather. A large 16 kilo feather made of kevlar and fibreglass. You know what I mean. Louise liked the boat, but it didn't make her want to take it home.

Next up, Louise tried a composite Necky Eliza. 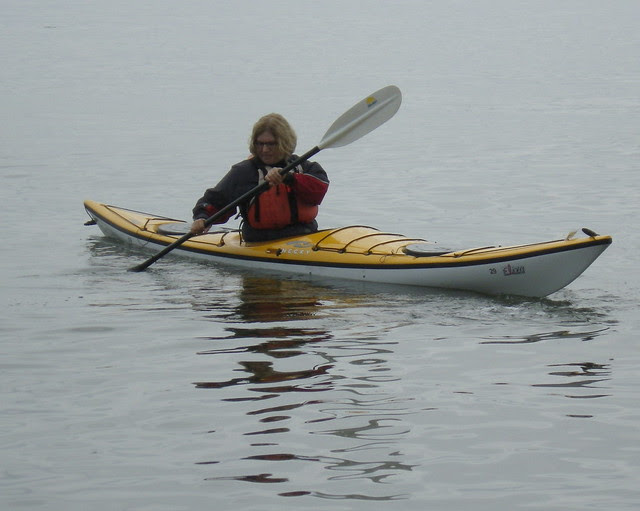 Louise has had some experience in an Eliza, having paddled Paula's plastic one a few times, and using a plastic one on our recent paddle on Salt Spring Island. However, the composite model is narrower and slightly shorter and has a sharper rocker than the plastic version, and some paddlers have argued that the differences in the ride between the two are enough that the two models should have two different names. Louise feels the same way and actually likes the ride of the plastic version more.
In between demos, we spotted Mike Jackson heading out. 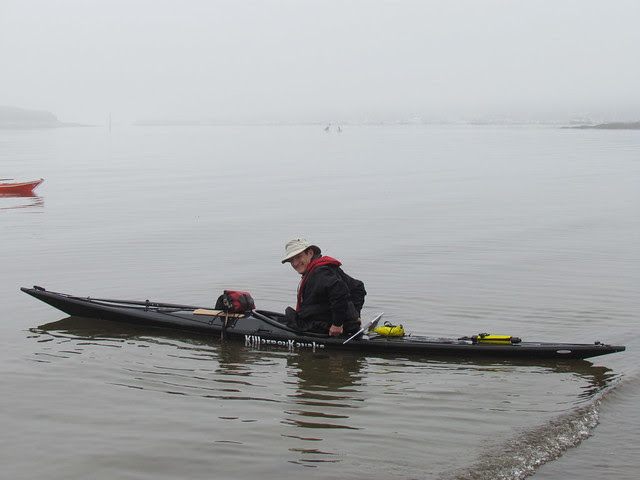 Then Louise got her chance to paddle the Delta Sixteen. 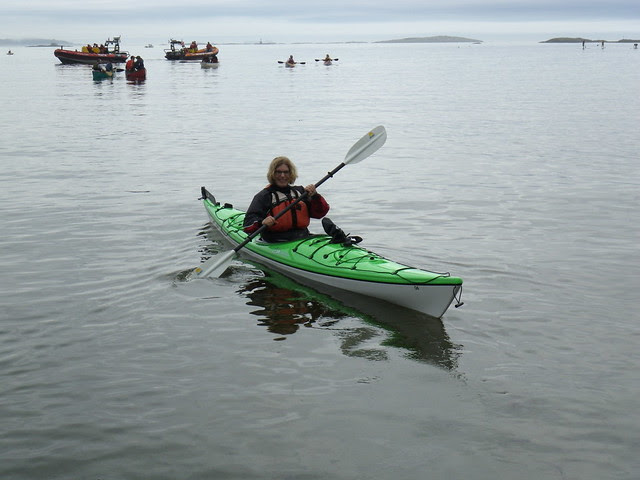 Clearly, there is no question that she loves this boat. Look at that grin. She was out there edging and leaning, things she was reluctant to try in the other boats she tried today. It's pretty obvious to us that this is the boat she should have bought, and it's the boat she should buy now. 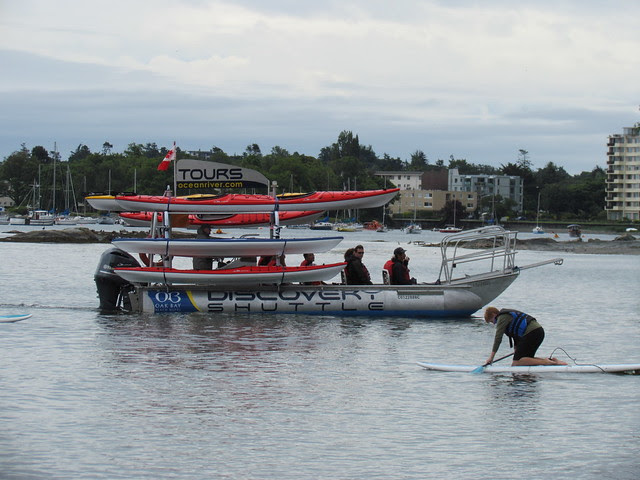 Yes, it's so cool that even stand-up paddle-boarders bow in tribute to it.
Actually, it's pretty cool set-up, and certainly a quick way to get kayaks out to a destination. 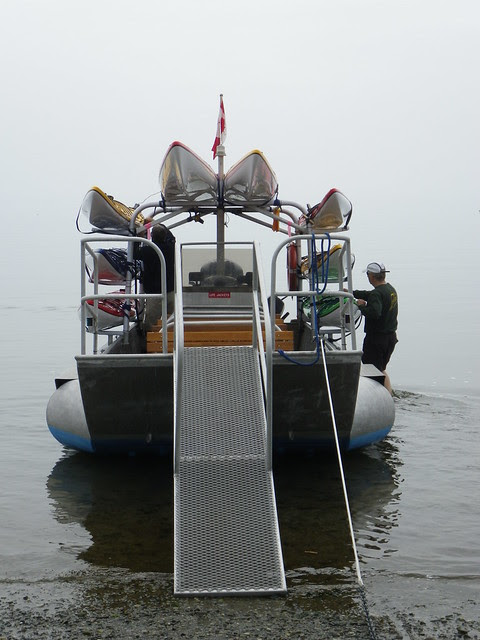 I took a Necky Looksha out for a little cruise. 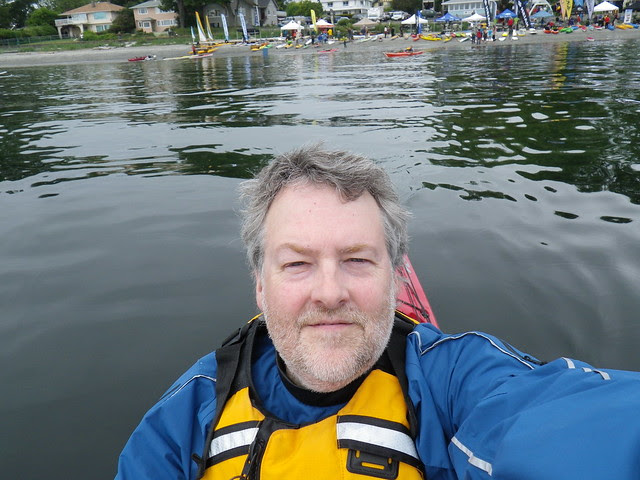 By this time, Paula had joined us on the beach and she and Louise each took out a Sterling kayak. 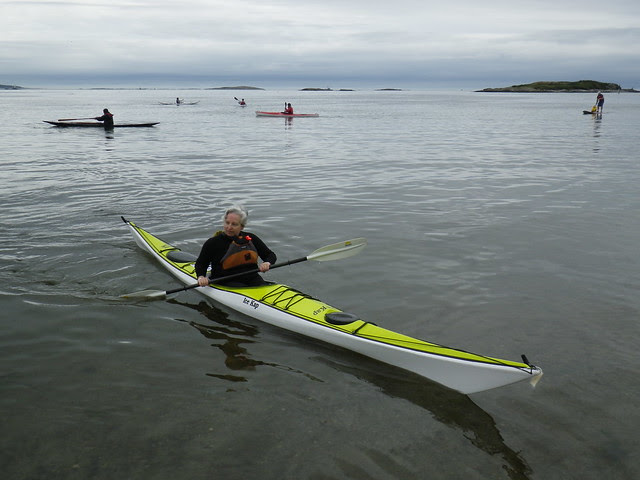 These are beautiful and well-made boats. Both Louise and Paula had minor quibbles with the hip pads in the seats, but since these kayaks are all custom made for the buyer, those issues could be easily worked out upon purchase. We all thought these were great boats.

As we were leaving, we bumped into Mark and Robyn again, and found Mark trying out a P&H Delphin. 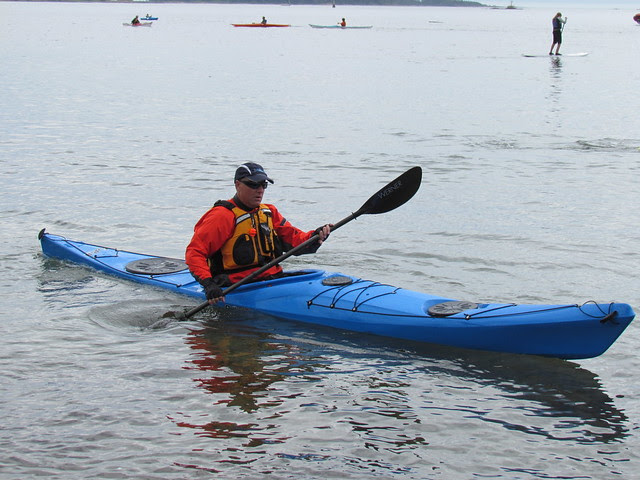 "I'm looking for a rock boat," he said. Why do I have a feeling they're going to be looking for garage space soon as well? 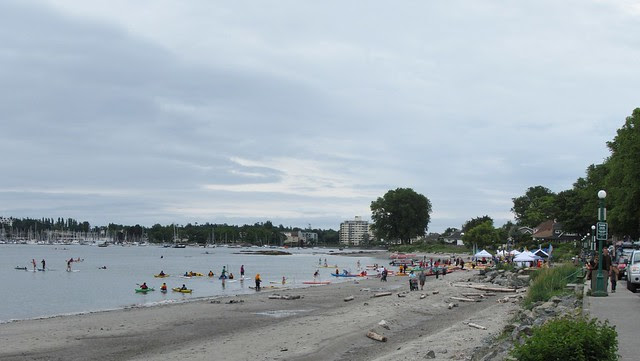