Louise and I enjoyed a couple of days away on nearby Salt Spring Island, one of the southern Gulf Islands, earlier this week. A short half-hour hop on the ferry Skeena Queen... 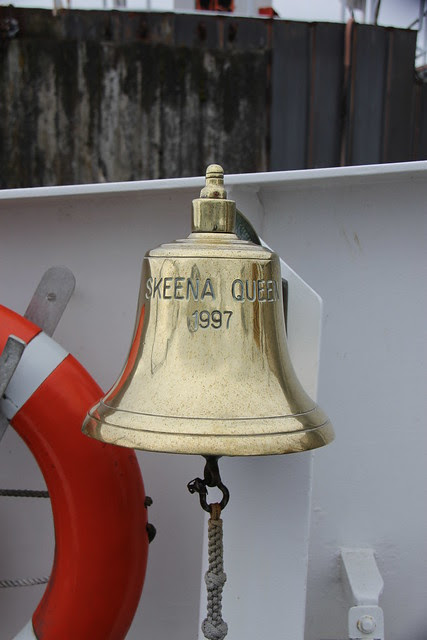 ...took us to the hamlet of Fulford Harbour, where we disembarked and began our exploration of the island. 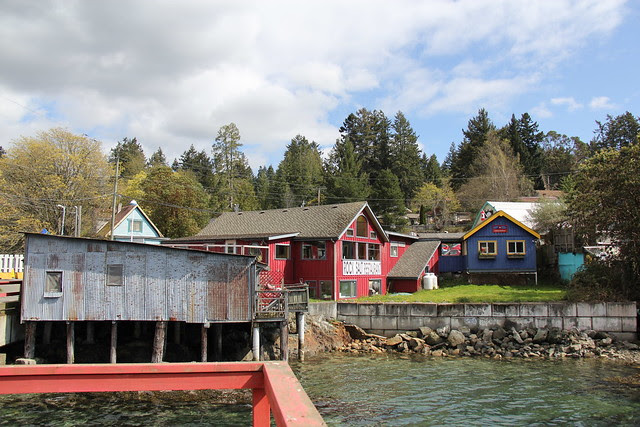 Our first stop was Mount Maxwell, the highest point on Salt Spring and one of the highest in the whole southern Gulf Islands at a height of about 660 metres. 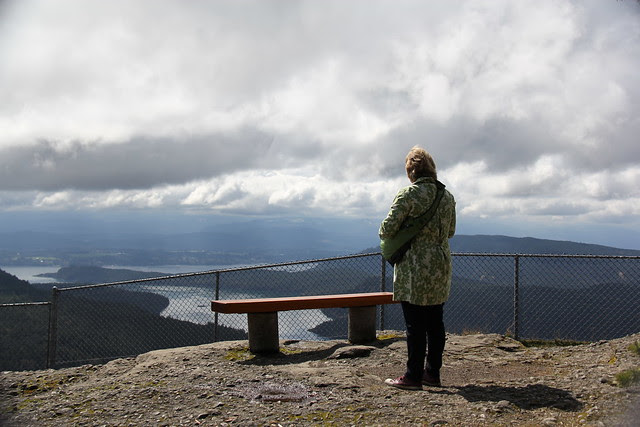 You can see forever from up here, or at least it seems that way. The road up is a twisty and windy dirt road -- make sure your vehicle can handle it before proceeding -- but the trip is worth it. What a view. 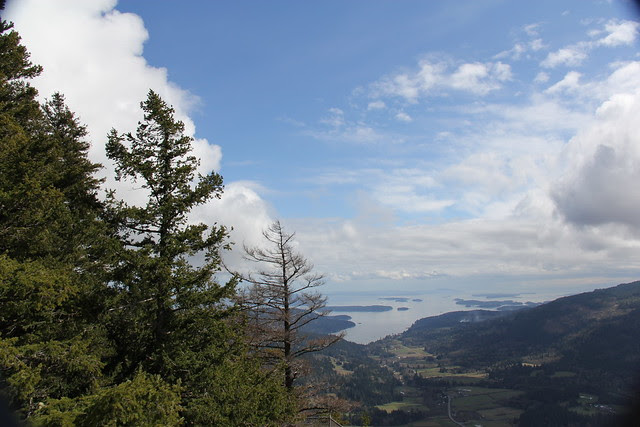 One thing we saw --and heard-- was a thundercloud roll by overhead. By the time we got to our hotel in the island's hotspot of Ganges, we were in the midst of a ranging rain and hail storm... 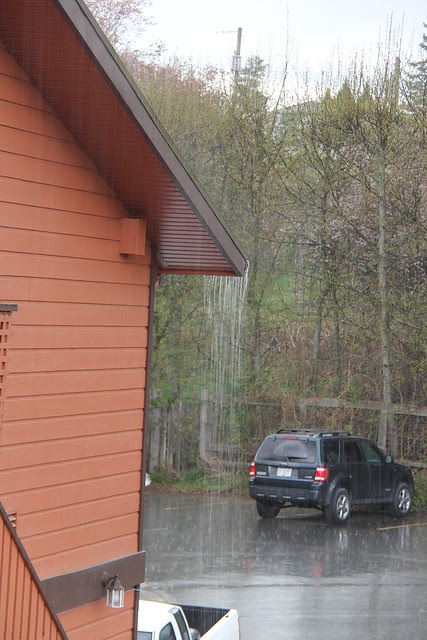 ...a storm which knocked out power to 150,000 customers back home in Victoria. Fixing the clocks would be on the agenda when we returned home.

We found a tasty lunch at Barb's Buns. Louise had tomato lentil soup and I had a delicious grilled cheese sandwich. 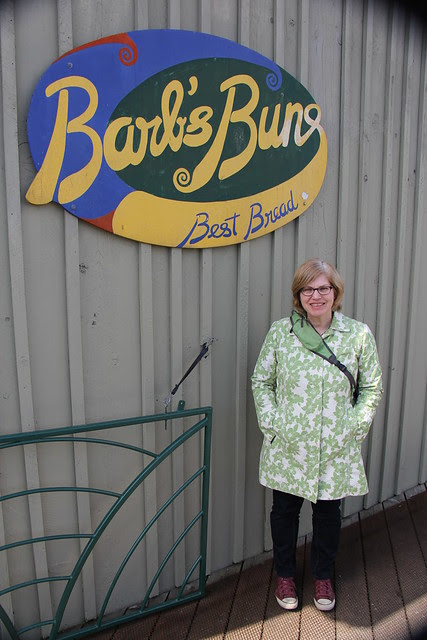 And any café that is playing Queen's Death on Two Legs on their stereo gets a thumbs up from me.

We explored Ganges for a couple of hours, then settled into our room at the Harbour House. 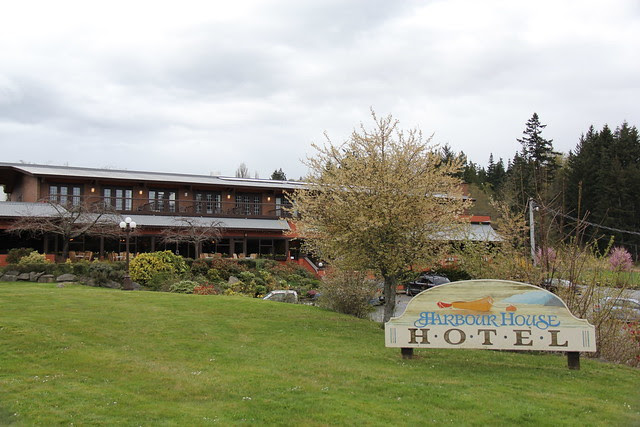 The Harbour House has a a great view of the harbour, but that would be expected given the name. Our room had an excellent view of the parking lot in back. We found Dagwood's Diner for dinner. Louise had an excellent Cajun Chicken Burger, while I had a Bacon Cheeseburger. Yum!
We settled in for the night in our room, interrupted for a while after midnight by a bunch of yahoos who'd obviously imbibed too much at a local watering hole and mistook the hotel hallway as their room and thought that shouting things like "Paging Doctor Faggot!" was the height of wit. Well, they were half right.

We breakfasted in the hotel. I had the yumcious blueberry pancakes and Louise had hazelnut and cranberry porridge. Thursday's unsettled weather had blown through and we were facing a gorgeously sunny Friday. 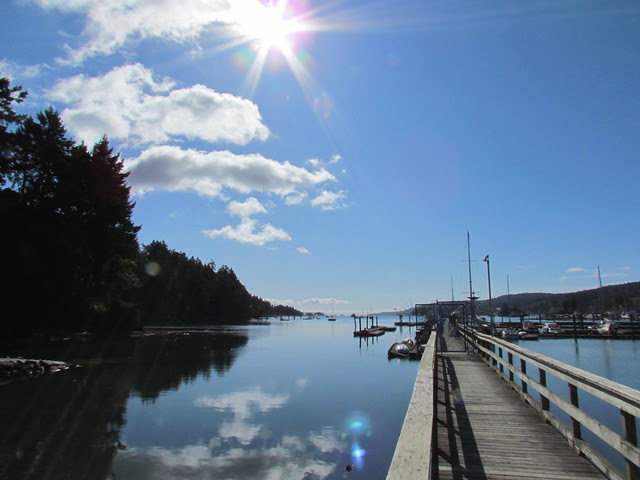 We booked a tour with Salt Spring Adventures. We've never kayaked on Salt Spring, so we decided to take a tour and let an expert show us the lay of the land, er, water. And we were just too damn lazy to bring our boats over.
Salt Spring Adventures was located across the road from our hotel, so Louise and I changed into our neoprene in our room and walked over. We thought we might have been the only people to ever parade around the hotel like that, but we saw others also wearing neoprene wandering the hallways. Either there were a number of paddlers staying there, or we were thankfully innocent regarding what kind of hotel we were staying at.
Louise was clearly ready to go. 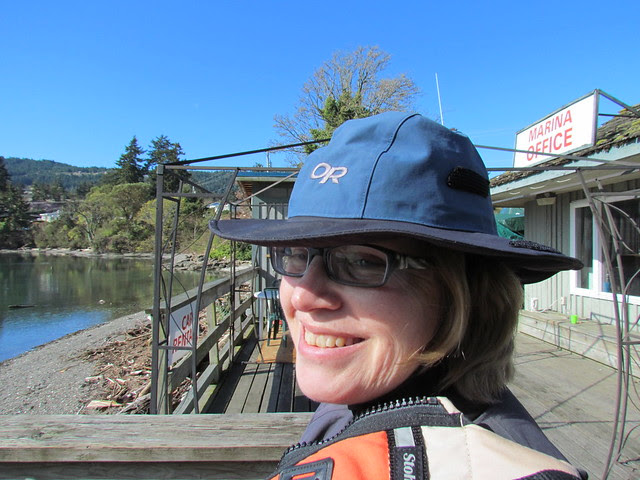 Our guide, Yvonne, got us and two other clients from France loaded into our boats and we headed out. 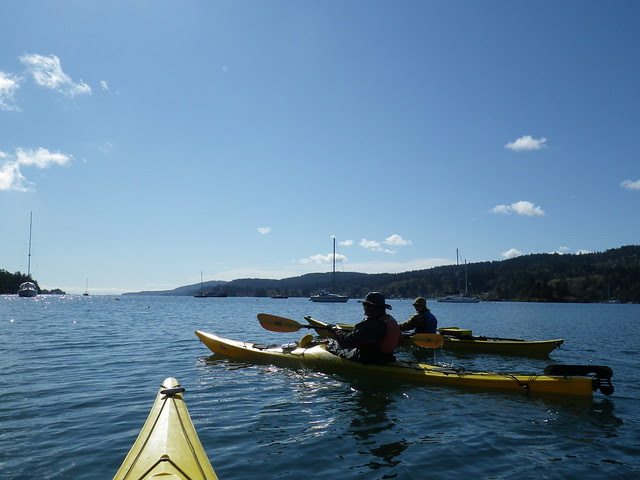 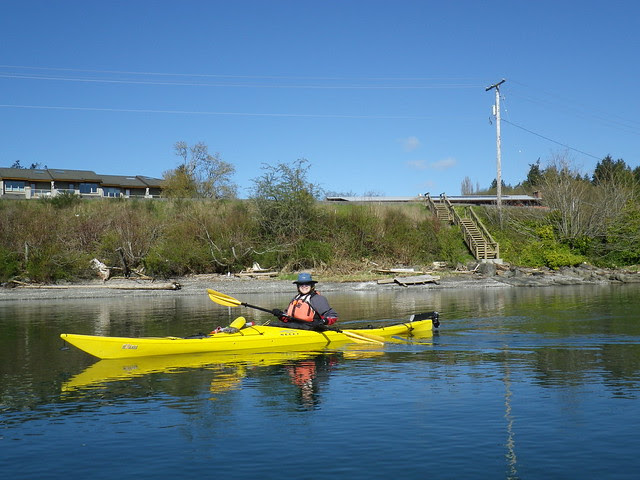 I love the erosions formations in the rock. I was reminded of our paddles around Ladysmith where we've seen the same kind of wearing in the rock. 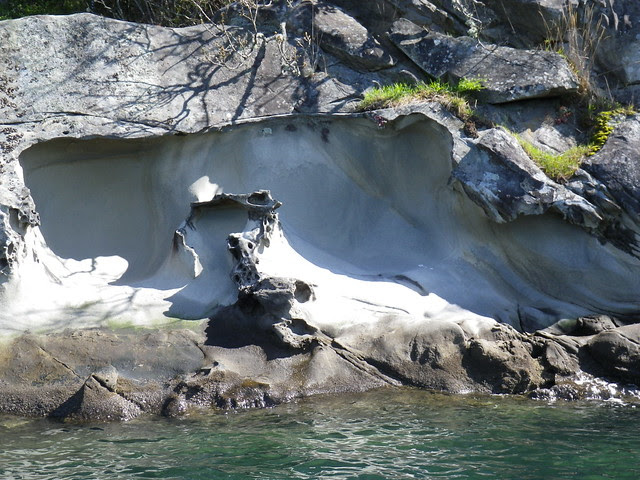 Yvonne was a terrific guide, pointing out various flora and fauna, local history, as well as passing out paddling pointers. She was a lot of fun as well as knowledgeable, and we really enjoyed her company. 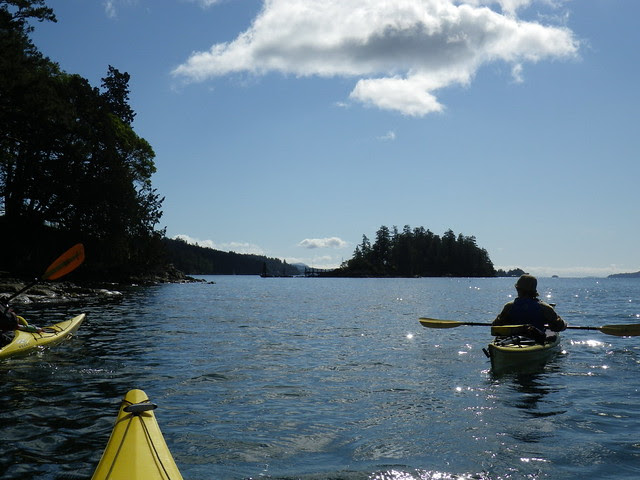 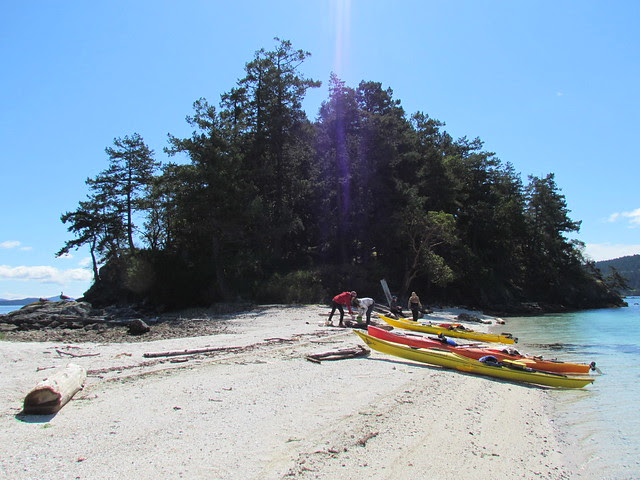 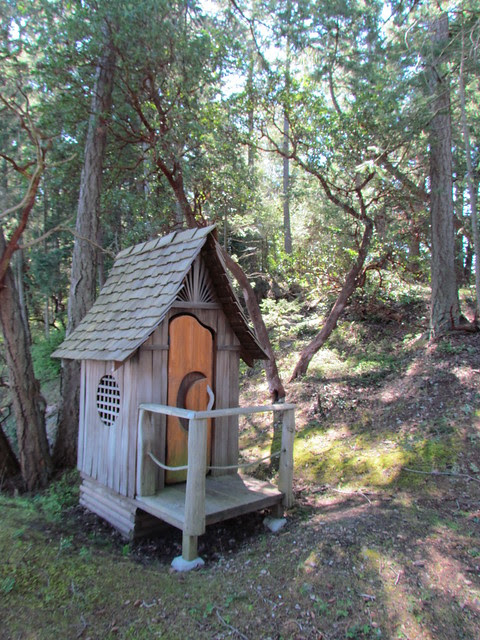 Too soon, we had to head back. 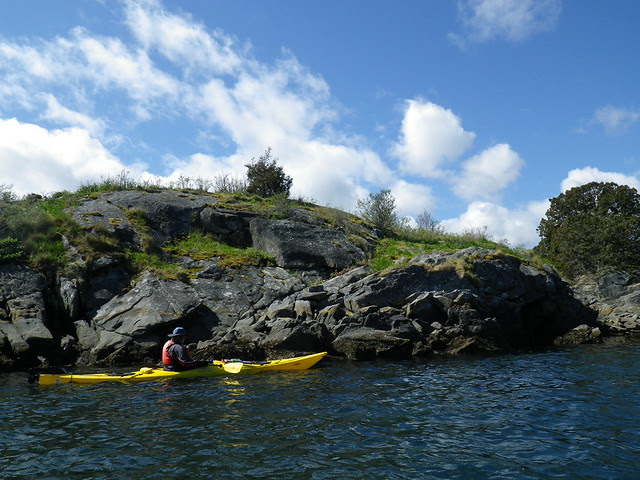 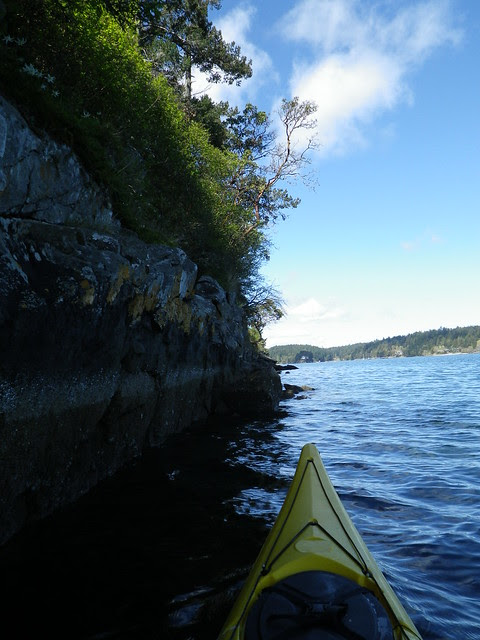 A lone seal pointed the way back. 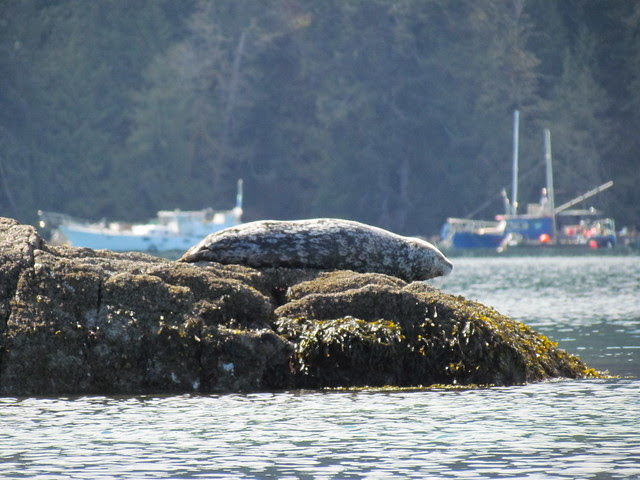 Back on shore, we spent our last few hours on the island browsing the shops. I bought too many books (what a surprise!) and Louise found the latest in kayaking chic. 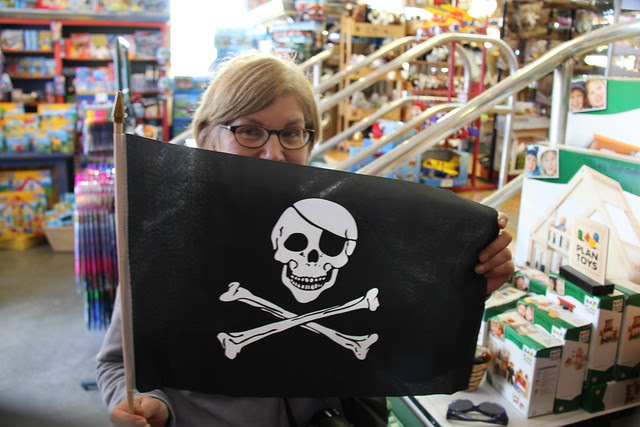 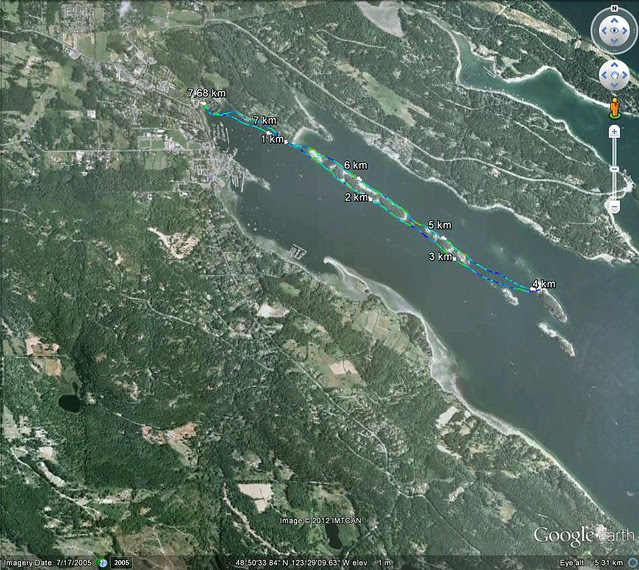