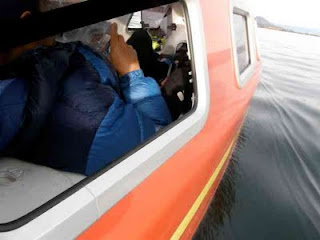 Greg Kolodziejzyk who, along with Jordan Hanssen, failed in an attempt to pedal around Vancouver Island beginning last week, has taken his stricken craft to Okanagan Lake where he "MacGyver-ed" a fix and put his craft back in the water. A pin had sheared off the drive gear when they paddled backwards to avoid a ferry on the first day of their circumnavigation attempt last week. On the way back to Calgary, Greg's team stuck a drill bit into the gear to replace the pin, and they decided to stop in Penticton for a few days to get some paddling on the lake.
Greg reports on his blog that once he pedaled out of the protected marina, he was facing four-foot breaking waves, but the craft handled them fine. He plans to return to Calgary for further testing before he pedals from Victoria to Hawaii next year.
Posted by John at 8:12 pm