A summer in the parc, part 3 This was the day I got on the water shortly after 9 am, and came off in time to catch the 4:30 pm bus, setting a record of 7.5 hours. A still, warm, brilliant late summer day, in which I went out of bounds, paddling half way around the basin beyond Ile de Mai, and then - daringly - back across the middle. Here's the view the eastmost, or at least up-stream-most point . . .

It was one of those glassy water days, when despite the effortless paddling, progress is exceedingly leisurely because of all the photo-pauses to capture all the lovely reflections, starting with the - now quite low - tunnel under the bridge to Île Gagnon, the red house, and blue boats docked alongside. Pause to take the first of many panorama shots, looking towards the north bank. That's the De Laurentides bridge on the left of the photo, disappearing behind Île Langlois. Île des Juifs/Île des Fraises lies, just to the right of my bow, then Île Gagnon. I don't know the name of the islet with the sparse trees and the yellowish beach. I paddled under the de Laurentides bridge, under the footbridge to Île Locas, and up the shallow, water-lily strewn channel between the river bank and Île Lacroix, towards the marsh. The water was very shallow and very weedy. Obligatory panorama shots of the marsh itself: From the approach to the the south . . .

Looking directly at the marsh . . .

Looking east from the marsh, towards Île Locas and Île Lacroix.

I could get only a little way into the marsh, via a channel that I suspect had been dug out, before running into a bank of debris. Water was very shallow, and I stirred up black mud and marsh gas with every stroke, no matter how careful. . . . up the south side of Île de Mai, hardly noticing the current that on past paddles had nearly stalled me before the top. At the top, I eyed the vista before me and then decided to go for it, working my way up the south coast past people's little river runabouts . . . To where the river began to narrow again, at which point I turned around and headed back towards Île de Mai. Discovered I am out of practice for paddling long open stretches. (Yes, I hear you say, that is not a long open stretch; it only felt that way.)

The wildlife was enjoying the sunshine as much as I was: herons, out and about along the side of the river. And turtles, alongside Île Chabot . . . And an as-yet unidentified bird which held still long enough in the trees of Île Chabot. Down the north side of Île Morris, under the bridges - where the swallow's nests were all silent and empty (and unphotographed). Big panorama that starts on the north bank and swings around to take in, I think, Île Lefebvre, in shallow waters full of water-lilies.

Cirrus cloud moving in, marking a coming change in the weather.

More turtles, east of the bridge behind Île Ducharme . . . With a detour for a pit-stop, I then completed the circuit by paddling underneath the Boulevard Curé-Labelle and around Île Bélaire, then back between Bélaire and Darling, back under the bridge, and in to home dock, approaching from the east. Phew!  And then I went home, via La Popessa, for pasta.

The marsh through the summer

Just to show the changes in river and vegetation through the summer, here are my marsh-panoramas, with an attempt at alignment.

A summer in the Parc, part 2 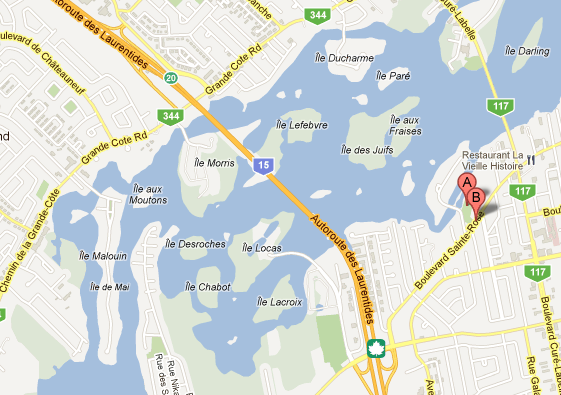 Kayaking seemed a fitting way to celebrate Canada Day, and the weather was ideal, so off I went on my usual schedule, 0829 De Laurentides bus from Cartier to the Parc. There were already a few groups getting ready, and I knew there would be many more by the end of the day.

I turned west from the landing, under the bridge to Île Gagnon - already noticeably shallower in comparison to May - and out onto the river. The water was still high enough for an easy trip through the tunnel underneath the south side of the des Laurentides bridge. Then under the footbridge to Île Locas, and up the north side of Île Locas to the marsh, with the birdwatching lookout clearly in view. The water level was still high enough that I could poke my prow into the marsh, though all around me I could hear herons muttering and whuffling, and I figured by now they might well be nesting, so I didn't push it. (On the map, if you draw a line from the tip of the promontary just west of Île Chabot to the bank just west of Île Lacroix, everything to the west of that is filled in with marsh and reeds. This photo has me towards the northern margin, just below Île Chabot. That stand of trees beyond my bow marks the little island. I really ought to come back and annotate these maps, but if I wait to do that, these posts won't go up until December).

And swung back around the north of Île Morris, to check on the progress of the swallows nests underneath the De Laurentides bridge. Clearly, I'd missed the building stage completely: the nests were built, and already occupied by something hungry, if the constant activity of the parent-birds was anything to go by.

Here's what the north bank of the river looks like, around Île Lefebvre,

Then I paddled back across to the south side of the river (with a pit-stop at Île de Juifs) and worked my way up the shallow, increasingly narrow side-stream just to the east of the de Laurentides bridge. I'd noted it on the way up as a potential side trip. I was stopped by a minor logjam, but on the other side, in a shaded pool, I spotted a mallard with her milling clutch of ducklings, visible more as motion than shapes in the shadows. To my pleasure, the little things bumbled up and over and around the obstruction, towards me. I started poking my way backwards, trying to stay out of their way at the same time as I took photos. Unfortunately, my autofocus was keener on sharp edged grass than cute fuzzy ducklings, so I have a number of fuzzy photos of cute fuzzy ducklings. The best ones were taken against water. I've been startled by the speed with which ducklings skitter back and forth across the water, but it occurred to me that I was thinking from the perspective of a naked ape who has to slog along with most of its volume immersed, instead of a little ball of waterproof down and trapped air that displaces a fraction of its body-weight and therefore has negligible resistance to the thrust of its (comparatively) big webbed feet.

. . . And then back past the house with the red roof, and through the tunnel (this willow is to the left of the tunnel), and back to the landing. August seemed to consist of a whole month of sunny, calm Tuesdays or Wednesdays or Thursdays, glorious for kayaking, miserable for working in an office that never seemed to get below 82F on the thermostat despite the loud wheezing of our antiquated air-conditioner, while the weekends were rainy and miserable, or had a strong wind warning. Or worse.

Decided to split this post into to two, otherwise both its production and its length were going to become exceedingly protracted. Stay tuned for the longest paddle yet.
Posted by Alison at 9:30 am No comments: