Elk Lake, just north of Victoria, at most times, is a glass-like flat calm, a giant azure puddle surrounded by green old-growth trees.
But in late afternoon, the sun can disappear as the clouds roll in, and the wind can whip the calm surface into a frothy chop. And it was in these conditions that a friend who wished to remain anonymous (for reasons that will become clear) and I found ourselves as we arrived for our first kayak lesson.
We have some previous experience kayaking. We had bought some small roto-molded kayaks earlier in the summer and we had made splashing about a regular event. We’d gone to many of the local lakes, and had gone out on the ocean a few times, always being careful not to go on stormy days, and trying not to over-estimate our abilities. Kayaking on a lake is like playing in a bathtub, but on the ocean, it’s a whole different feeling. The ocean is constantly moving and shifting underneath you, wakes bounce you, and currents pull at you.
The sights you can see! Eagles, otters, seals, sea lions, fish, crabs, sea stars… even an old paddle wheeler! (or a new faux paddle wheeler, since the wheel, although it spun, didn’t seem to actually touch the water). 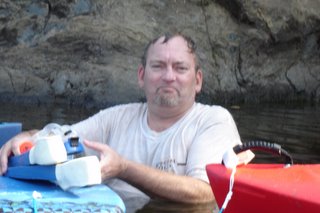 Finally, after a few moments of struggling, he was back in his kayak and he was still laughing.
“My glasses,” he said. “I was underwater and I saw my glasses floating away from me. I reached out and was just able to grab them. That’s what I was shouting about when I surfaced. I couldn’t believe I still had my glasses!”
That’s what I heard when he went over! A couple of cries of “Oh shit,” a splash followed by a couple of blub blubs, then Bernie breaking the surface with his glasses in his fist, shouting, “Woo hoo!”
We couldn’t stop laughing. Adrenaline and near-death experiences can do that to you. We calmed down and slowly paddled back to the beach. Brian shrugged his shoulders, and said, “I guess you passed!”
Posted by John at 10:52 am No comments:

A different sort of adventure today. Paula, Bernie, Louise and I drove to Sombrio Beach. It's a beautiful spot a couple hours up the West Coast from Victoria. This really is the most beautiful place on earth. Bernie brought his kayak and decided to play in the waves. He had a blast, but I'm surprised he didn't freeze! ...then the waves hit Bernie!