Time munches on.
Now over four months after my bike accident, my once-broken arm and shoulder still have a road to travel before they could be said to be recovered.
That said, a lot of progress has been made over the last few weeks.
First, I have graduated to what is referred to in physio lingo as "resisted exercise." You and I call it pulling giant rubber bands. This is significant because my range of motion, while still not yet in the normal range (and may never fully be), is certainly in the range of motion for getting by. The problem is that I have no strength in the arm. In fact I have more range than strength. If I left up my left arm in front on me, I might get 130-135 degrees of rotation. But if I use my right arm to push my left arm up further, I'll get 175-180 degrees of rotation.
So now we're into strength building and re-activating the muscles that haven't had to work in months. Hence the rubber bands. I have eight exercises to do with the bands, plus one exercise with a free weight, a whopping three-pounder!
Other good news: I don't need to do stretches with a cane anymore. I'm flexible enough now that I can do some new stretches that do the job better and don't require the cane. And I'm now down to once-a-week visit to the physio dude.
So now the question is when do I get back on my bike and into my kayak? That remains to be seen. The Victoria Day weekend marks about six months since my accident, which was sort of the time frame mentioned by my surgeon, so that is a target that is on my mind. Sometimes I feel that Canada Day is a more realistic time frame, but we'll have to wait and see. The point is that I WILL be back on my bike and on the water this summer.
Woo hoo!
Posted by John at 8:10 pm 2 comments: 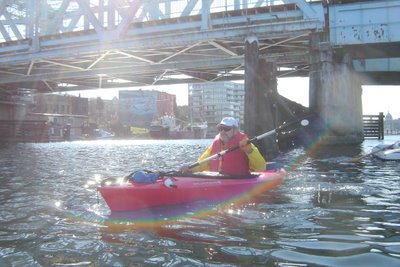 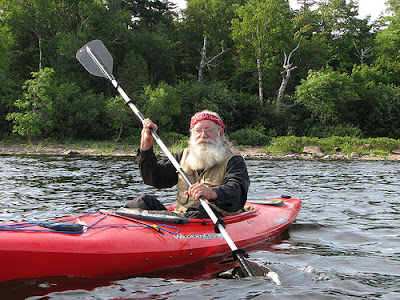 It's hard to believe that 15 weeks ago, almost four months, I was just coming out of surgery on my shoulder. Range of motion is still an issue, and as yet I'm still not doing any real strength training, but that should start any time now.
Today my doctor said that everything was as it should be. He ordered up another set of xrays, but he figures this will be the last set because the bone and the titanium look good. Now it's just a question of how well the soft tissue comes back.
Here's one of today's x-rays. This is from the side -- a profile shot, if you like.
Man, that's a lot of titanium. 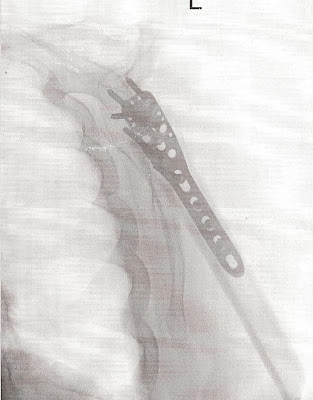 A beautiful sunny day in the early days of spring. How do I know that it's spring? This is a hint; First i had to cut my father-in-law's grass on Feb. 26th. Then I shot this tree in bloom on February 27th on Discovery. There was also a dandelion in full bloom. Spring is clearly here, even if the rain doesn't want to agree. This twisted old bugger has survived another winter of gales on Discovery. Interesting how life on small islands tends to show the greatest range of adaptation because of the extreme conditions. (Yes Mr. Darwin, you said it first).

The trip over was uneventful. The only real difference is that I headed over from closer to Cadboro Point and ended up a couple of hundred metres off the north end of the islands. The inlet marked by the star is really quite extensive, and is at least a part-time home to some of the otters that feed in these waters. I spent a large part of the day on Discovery, waiting for the tide to turn. I really didn't want to be paddling flat out and going backwards. The currents in Baynes and Plumper were at full blast for most of the afternoon, but dropped off towards evening, finally hitting slack at around 6:00pm.

The extended stay let me wander about the island, exploring the park side to my heart's content. (Discovery is park on the east side and First Nations territory on the west).

The trail through the park goes from Sea Bird Point on the northern side to Commodore Point to the south (and no, no Lionel Ritchie sightings). Sea Bird Point is not accessible by foot, as the lighthouse and boarded-up lighthousekeeper's house are fenced off. But the heights are accessible, making for great views. With the number of rocks and other features off the point, it's clear why a light is needed. But it must have made for long winters to be the keeper of the light. This is the "Orange Tiara" off the point, shot from the heights. You can see the rocks off the point between the camera and the ship. There was a steady 4 knots or so current running about these rocks when I shot the picture. Definitely not something to be fighting against if you're a kayaker. Ships pass the island constantly. You almost never ear anything from them, even when they pass within two or three kilometres of you. Yet without a ship in sight (and I used my binoculars to check) there was suddenly this low booming/industrial sound coming over the water. I never did figure out what it was.

There was, of course, the obligatory eagle flyby. Actually there were thhree or four eagles, but I only got a shot at one.

Rudlin Bay is quite big for the size of the island, and the late winter/early spring water is clear and inviting. I kept wanting to just dive in--but I did show at least a modicum of good sense and declined hypothermia. On the north end of the island is an abandoned boathouse and dock. Checking my chart later, I realized that this was probably on the First Nations side of the island. My apologies to all concerned.

There is so much driftwood piled on the beaches. This log is on Commodore Point. It makes for a great highway when beachcombing/exploring.

All in all, just another day in paradise.