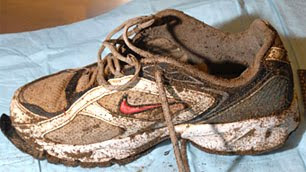 I just can't make this stuff up. There's been another discovery of a human foot on a beach in the Georgia Strait. You can read about it here.
That makes six of these sad discoveries that have occurred in this general area since August 2007. There was also one foot discovered just south of the border on an American beach, and two hoaxes. Yep, twice someone thought it funny to set up a fake foot in a shoe for someone else to find.
We've written about the discoveries of these feet before on the Kayak Yak blog... it seems that all of them are found in sneakers because this type of shoe floats. The feet all appear to be naturally disarticulated through decay. One foot belonged to a woman. And only one foot has been identified, belonging to a man who went missing in 2007. The police and coroners are frankly baffled why so many feet have been turning up lately. The investigation continues.
In the meantime, since bodies and body parts like these feet do turn up from time to time in the paddling waters around here, it's worthwhile to remind kayakers to be prepared.
Posted by Paula Johanson at 5:52 pm