I've been out in my inflatables a lot these past months! If you've been reading Kayak Yak, you've seen photos of the inflatable kayaks in our little fleet of boats. They're from Advanced Elements, and you can check them out online at http://advancedelements.com/ 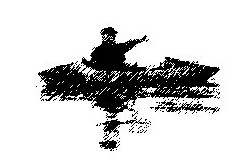 These kayaks are sold locally through Pacifica Paddlesports in Brentwood Bay and Sidney, BC. I bought the Dragonfly from West Marine (who call it a Skedaddle), and have been raving about it ever since. The new version of this versatile little rec boat is called the Lagoon -- check it out! The only thing this kayak lacks is a full-length keel, so some users have been known to put a broomstick inside the hull, under the floor.
The Lagoon's big brother boats do have an option for a keel, though. It's called a Backbone. It's a take-apart bar with two shovel-shaped ends that fits comfortably inside the hull and under the floor. As I've mentioned before, there are different lengths for Backbones made to fit the Lagoon2, the AdvancedFrame, the Expedition, and the AdvancedFrame Convertible.
The recent gift from Lee of a Backbone has really been welcome. I've tried it a couple of times now, and have realized something important about Advanced Elements kayaks -- I'm pretty darned small and light compared to their designs. When these boats are listed as carrying up to, say, 250 pounds, that means that a husky fisherman, tackle box, cooler and a depth finder or somedamnsuch. A 160-pound paddler really needs some heavy gear inside the Expedition, and should only benefit from adding a few gear bags or water bottles.
Installing the Backbone inside my Expedition means that the kayak feels more rigid. It doesn't ripple as much, front to back, during its supple ride across the top of little waves. As well, I sit at least an inch or more higher than without the Backbone. There are some reviews on the discussion forum at http://advancedelements.com/ that praise the feeling of sitting higher. I didn't like that feeling any more than riding without the Backbone. But now I understand why some paddlers like sitting higher: they're used to fishing out of sit-on-top kayaks.
I'm not. I'm used to sitting inside a hardshell kayak. With my blue Old Town Adventure kayak, I even got Bernie to take out the seat and put in a Necky foam seat that glued directly to the inside of the hull. But I don't mind this ride, sitting higher with the Backbone. It's not as if it can be felt under the inflatable floor. What I can feel is the Expedition around me as a more rigid frame. It's easier to press against the footrest bar, and that makes paddling a full-body experience instead of just flailing with my arms. That's terrific!
The extra weight of the Backbone isn't a big problem for me. When I want a very light, portable boat, I use the little 8'4" Dragonfly anyway. But where a 13-foot kayak is the right choice, it's worth bringing along the Backbone. It's less work and more fun to paddle with it, and the Expedition glides better.
What makes these inflatables work for me is not just that I can carry them on the bus or stuff them into a car trunk -- though the portable quality is a big plus. What works for me is that paddling these inflatables feels like what I'm looking for most of the time when paddling any kind of kayak. These aren't stiff toy dinghies or pool toys. And as our paddle group keeps saying, "Whatever gets you on the water."
Posted by Paula Johanson at 9:38 am