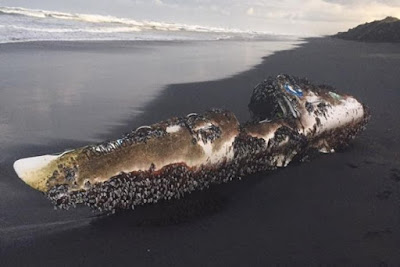 In December 2014, Stuart Cleary began his attempt to be the first solo kayaker to successfully cross the Tasman Sea between Australia and New Zealand. 24 hours after launching and less than 100 km into his journey, he abandoned his quest, and his kayak, following multiple equipment failures and he had to be rescued. Now, 18 months later, it appears his abandoned kayak was intent on completing the crossing without him; this week it was discovered washed up on a New Zealand beach about 50 kms from his intended landing spot.
While it seems doubtful that his old kayak will be seaworthy, Cleary has recently been contemplating another crossing attempt as well as plans for a second kayak.
Posted by John at 7:35 pm