The Henry Brothers are Back in Town 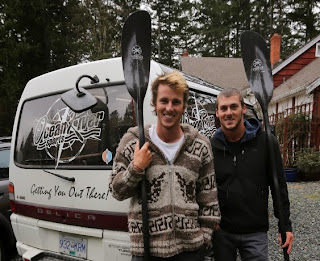 Russell and Graham Henry (sons of Ocean River Sports big kahuna Brian Henry) have returned to Victoria after completing a 7,000km kayaking expedition from northern Brazil to Florida. After their seven month-long paddle, they believe they they are the first people to have kayaked the northeast coast of South America from the Amazon to the Caribbean Sea. They often had to paddle 27 hours straight on the water.
Graham told The National Post, “You’ve been in your boat for 15 hours and you’ve got another 12 hours to go. You just do everything in your power to not think about how much you don’t want to be paddling.”
Russell added, "“You can see the storms coming. It would be blue skies. Then the wind and rain comes and you’re in the middle of this massive, dark, brutal thunder storm. And our paddles are carbon fibre, so they’re conductive. We’re just hoping we don’t get hit [by lightning].”
Back in Victoria and ready to return to "normal" life, they did discover on their trip that Canadians have a bit of a reputation for adventure. As noted in the Victoria Times-Colonist:


Graham said he and Russell are aware of the tradition of adventurers from Canada’s West Coast. People they talked to during their trip would often have no trouble guessing they were Canadians — and even West Coasters — because of the audacity of their venture.
“They’d say: ‘Only a Canadian would do this.’ ”