It's been a bit of a bittersweet day. Regular readers may recall that Louise and I booked a whale-watching trip a couple of weeks ago that got cancelled because of high winds out in the straits. We rescheduled for today, and we made our way to Five Star Whale Watching, based out of the historic Empress Hotel near the Inner Harbour.
Let's start by saying that the Five Star folk are indeed five star. Well organized, knowledgeable, and a clean and comfortable boat made for a wonderful adventure out on the water.
I've been eagerly waiting since our last whale watching tour last year to go out and try to photograph orcas again. Armed with a better lens, I was hoping to get some more good shots.
And I did. I think. Unfortunately, something went wrong when transferring the pictures from my camera to my computer and the last half of them vanished into the ether. No longer on my card, and not on my computer. I hate it when that happens.
So now you understand the bittersweetness. A great day on the water, marred by the loss of the best pictures of the whales, plus the loss of some great seal shots as we passed by The Chain Islands on the way back. And that really sucks, let me tell you.
On the other hand, all was not lost as some pictures did survive the transfer, and some will be of particular interest to kayakers. (That's what we call foreshadowing, folks.)

We pulled out of Victoria harbour under cloudy skies. Yesterday we set a new daily high temperature, but there's no worries about that happening today. The cloud cover thickened as we zipped south along the Dallas Road waterfront, passing some of the other vessels enjoying this holiday Monday. 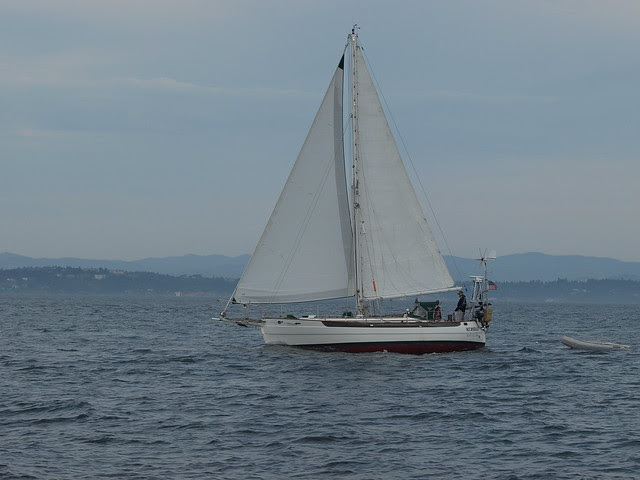 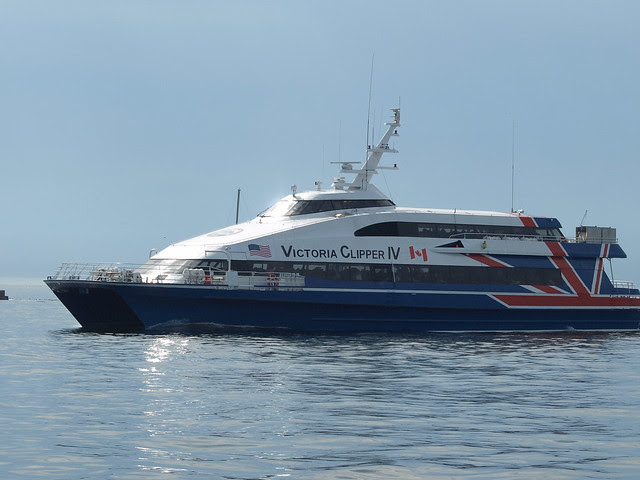 The clouds darkened so much that I was starting to wonder if it was going to rain on us. But the rain stayed away, and only a slight mist from the boat's spray floated down on us. 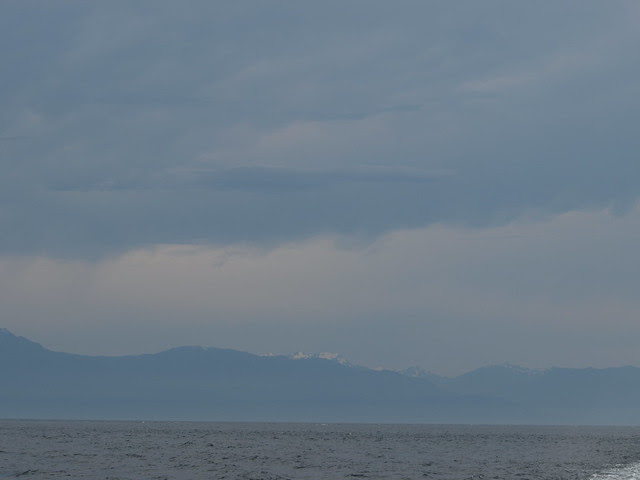 Soon we were in American waters on the western side of San Juan Island, where we caught our first glimpse of orcas. 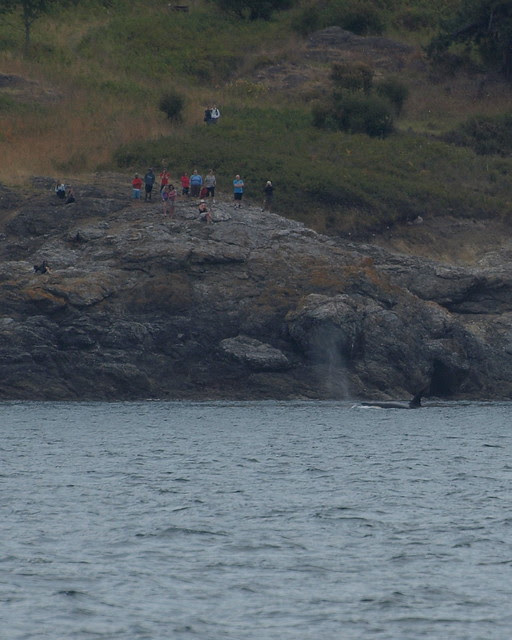 It's easy to tell where orcas are. Just look for where the crowds are gathered on shore, or where the whale-watching boats have gathered at sea. 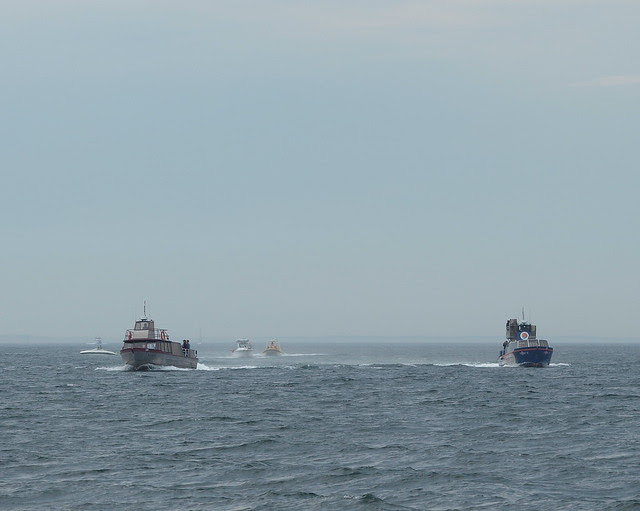 Quickly, the naturalist determined we were looking at J-pod, one of the 3 local resident pods, which currently has 26 orcas. One of the orcas we were watching was identified as J27. The total number of local residents, which are considered endangered, is just under 90. 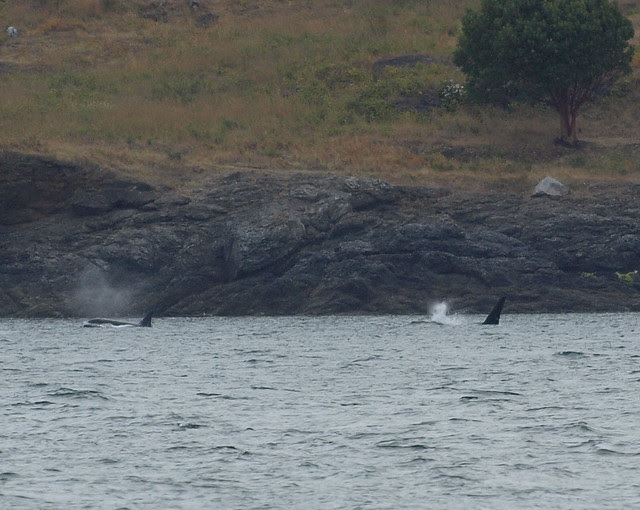 As we watched this small group of orcas, I spotted the blows from another small group further ahead. And ahead of them was a group of kayakers. Four identical doubles and a single, so I assume a kayaking tour was paddling down the coast when they got the surprise of their lives. 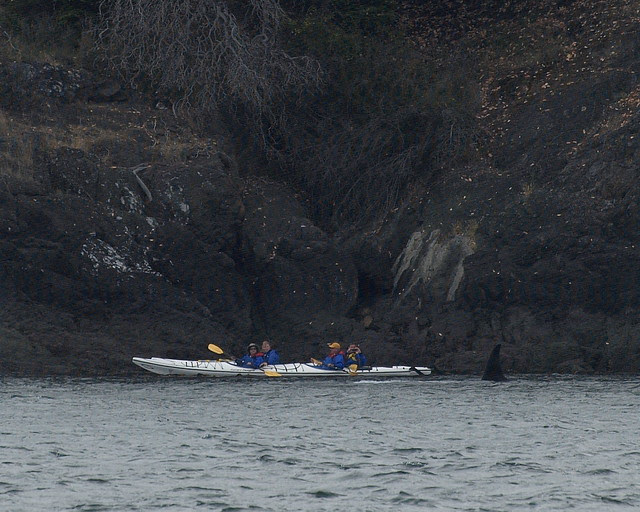 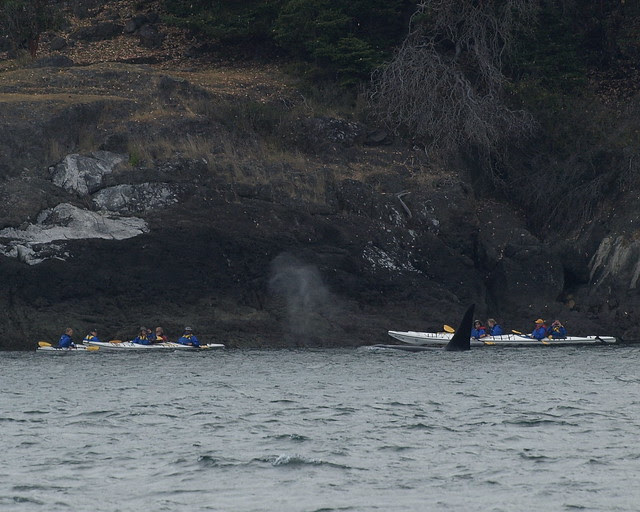 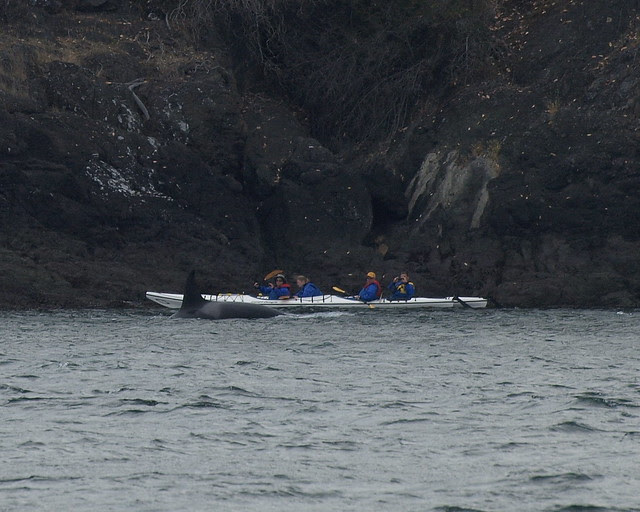 Wow. It doesn't matter that I lost half my shots because clearly I wasn't going to have the best shot of the day, was I? I hope they gave the tour guide a big tip for arranging that.

We followed the whales for a few more minutes, then we turned to head back. 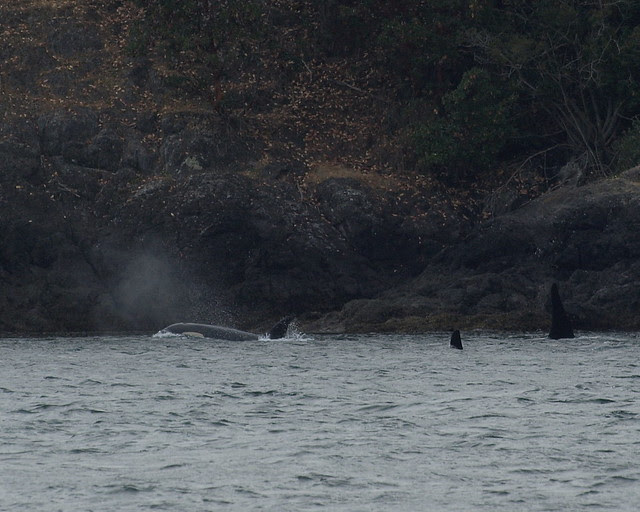 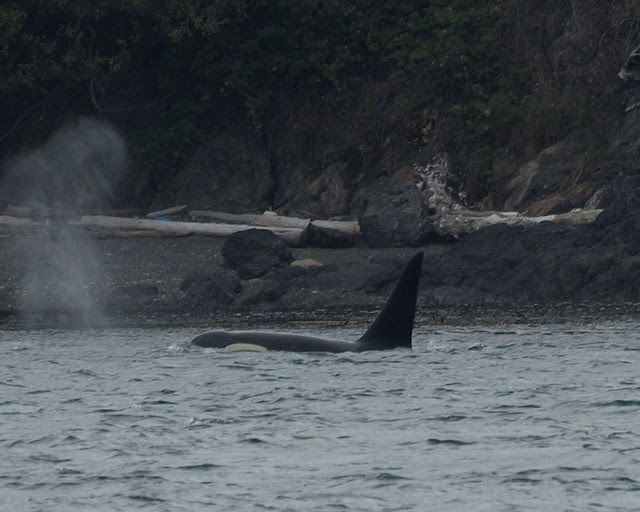 How close is too close when you encounter whales?

Fisheries and Environment Canada recommend that vessels (and that includes kayaks) should stay a minimum 100 metres away from whales. Don't approach from in front or behind, only from the sides. 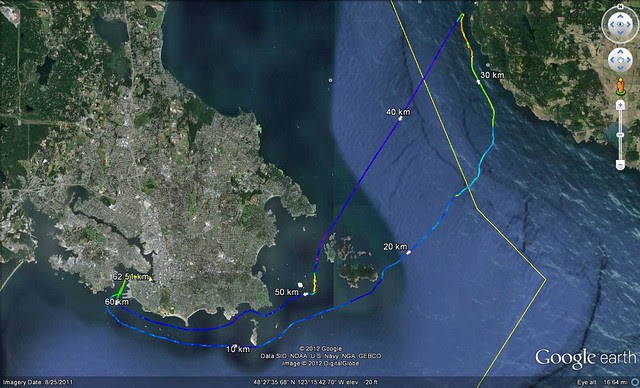