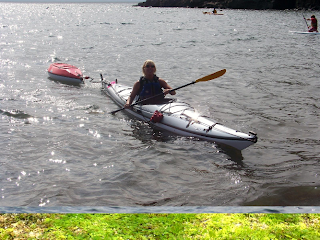 Kayaks are well-known for allowing wilderness travellers to bring along more supplies than they can carry. Most sea kayaks can carry more stuff than any backpack! Even my Eliza, with slim lines and small hatches, still has space for more cargo than I would care to carry along a hiking trail.
But how do people carry more cargo than fits into their kayak hatches? One intrepid paddling pioneer used to swim around islands in Hawaii, towing a floating picnic cooler along. Some stand-up paddleboarders keep a drybag on the board's deck. I wonder if my little inflatable could be towed behind a kayak, as a sort of cargo trailer.
Turns out other people have had a similar idea. There's a gizmo invented to be a kind of cargo trailer for kayaks. They call it a Kayak Kaboose. I wonder how well it works. It sure looks like a neat idea.
Posted by Paula Johanson at 7:59 pm