You might expect that if we had two weeks off work during the beginning of summer that we might get a lot of kayaking in. Sometimes things just don't work out the way you would expect. We had out of town family visiting, plus we adopted two new kittens (and they are a more than a handful). Add to that a few days of record-breaking heat which rendered me into an immobile puddle. So it wasn't until the last day of our vacation this past Sunday that Louise and I were able to drag our kayaks out of the basement and hit the water, taking another kayaking course through the fine folks at Ocean River, this time on navigating currents.

We were joined by six other students and two instructors, Gary and Gary. Although it was a clear sunny day, the forecast was calling for strong winds, with a gale warning up for Juan de Fuca Strait, our destination.
Still it was hot enough that there was much complaining as we slipped into our neoprene and headed out. Helmets were the order of the day, not only to protect our heads should we go over in shallow water, but to protect our heads from errant golf balls as we paddled alongside a golf course on the way to Gonzales Point. 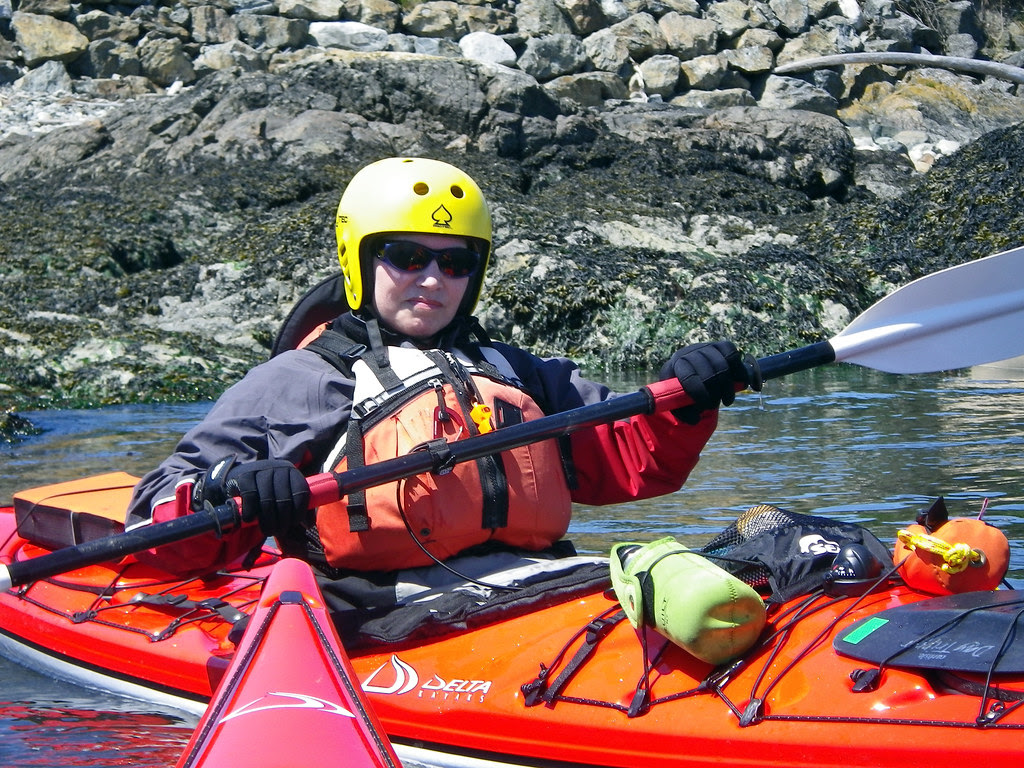 Down near Gonzales Point, it was obvious that a strong wind was coming up. There was no more complaining about how warm we were in our neoprene. Gary and Gary left us in a small protected cove to scout ahead, telling us they'd be back in five to ten minutes. From the cove we could see the waves out in the channel getting whipped up, and we knew that it would be worse around the point and out in Enterprise Channel. After they'd been gone 20 minutes, the general consensus amongst the students was that they were going to call the course off, so we were all a bit surprised when they reported back that we were going to proceed with the lesson. They said that conditions were right on the cusp of what they felt comfortable in exposing us to, but felt that we could handle it. Also, because the wind was blowing from the southwest, roughly the same direction as the current, if any of us got blown away, we would be blown back around Gonzales Point towards where we'd come from and into relative shelter. 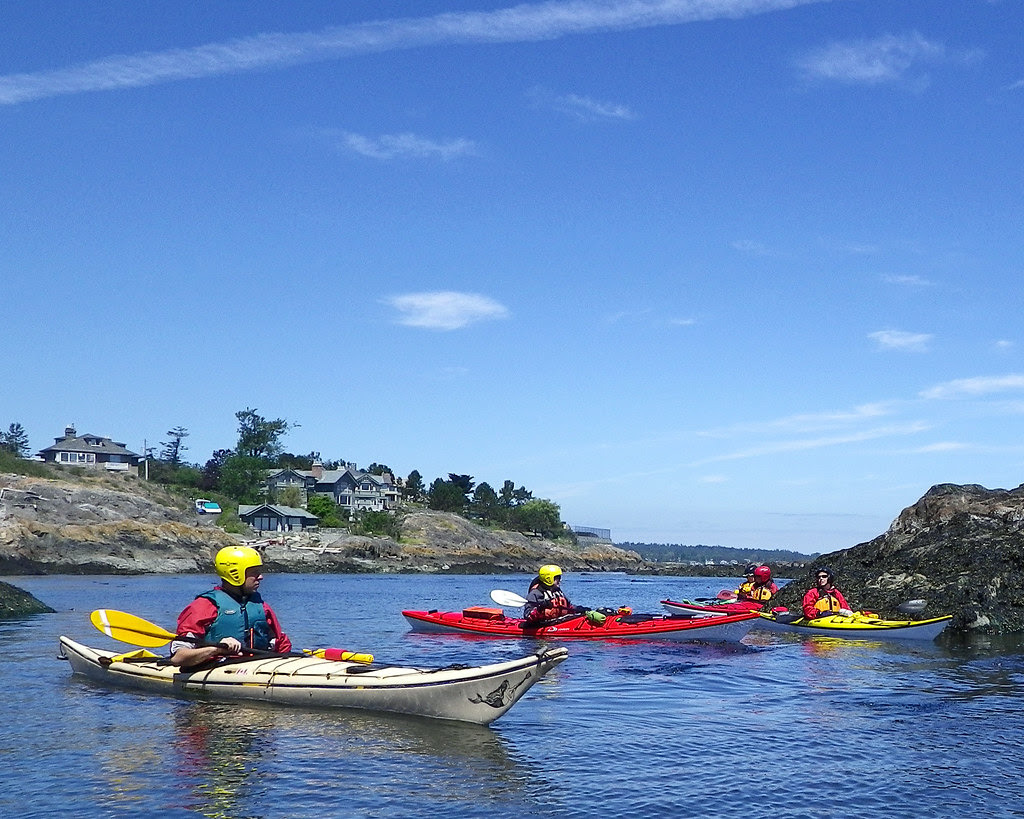 So we headed out and around the point and into some swells and a strong wind. We put in for a brief respite at another beach... ...while Gary and Gary surveyed the waters and got weather updates. We clambered up a rock to see what we were getting ourselves into. Finally we began the lesson, which turned out to be not entirely successful due to the strong wind and currents. Keeping track of eight student kayakers under these conditions must be the equivalent of herding cats. And with the wind, it was sometimes difficult to hear instructions. 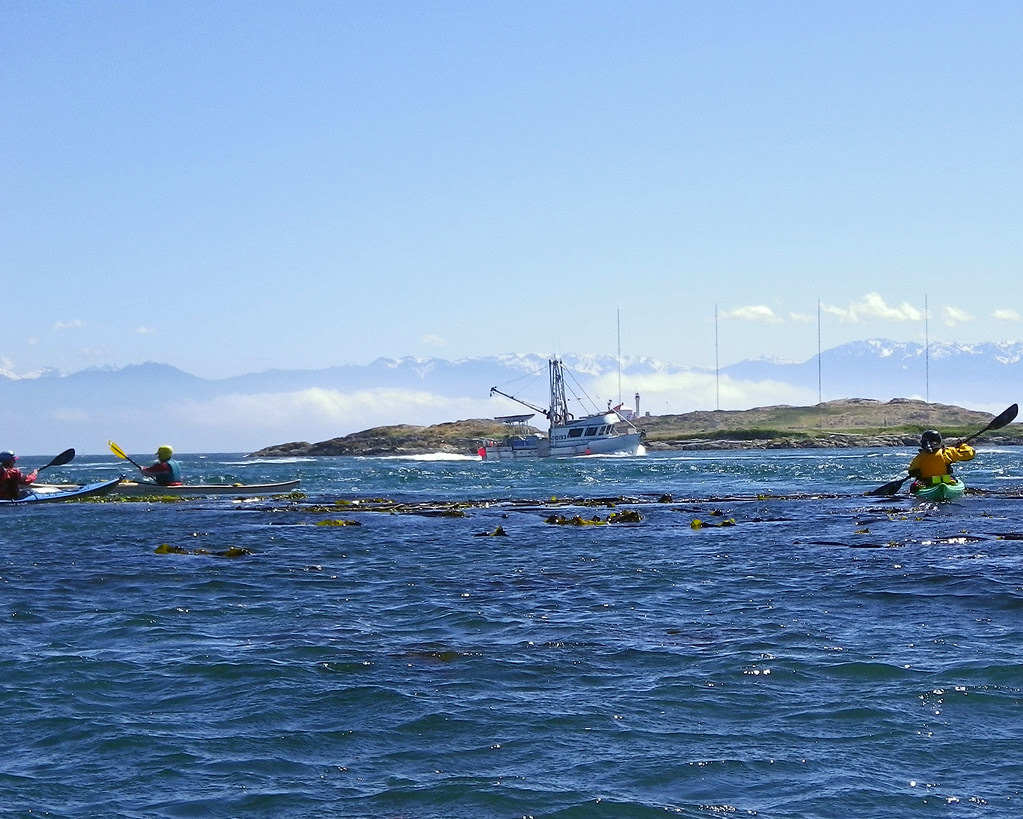 But we plugged away at it, even though most of the students had moments when we felt way out of our comfort zone. Near the end of the lesson, we even did a little surfing out in the channel. 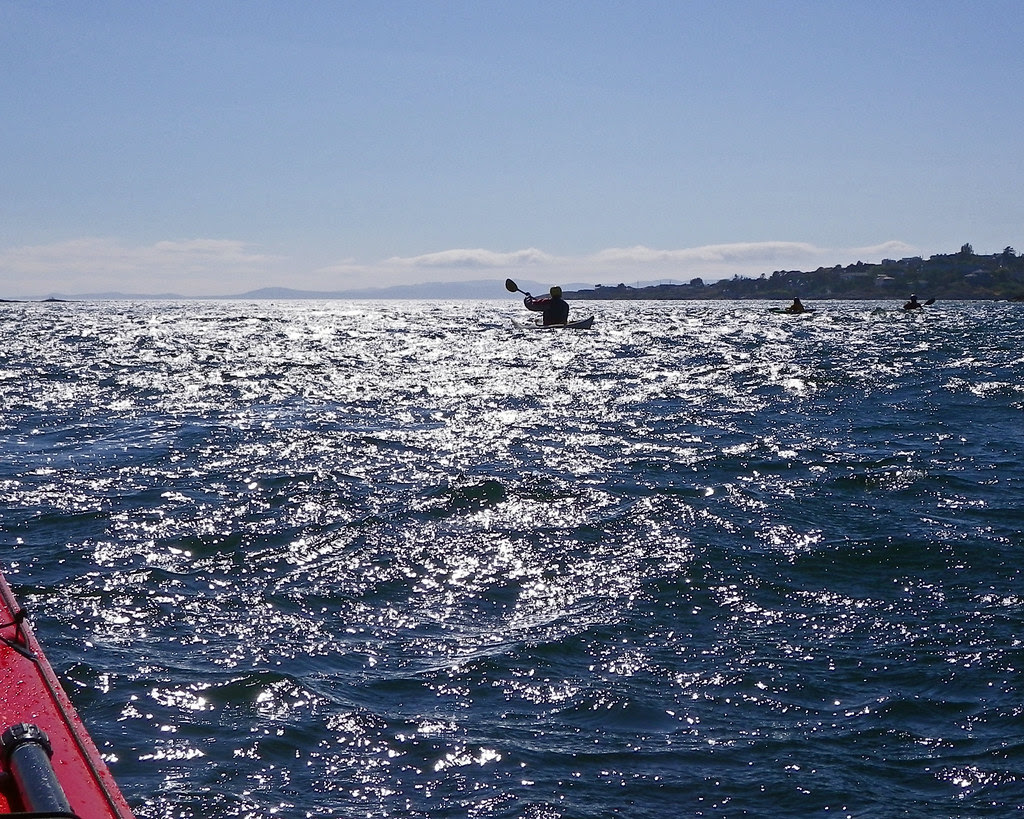 Before everyone had a chance to surf, the wind picked up really hard. We turned and headed towards shore to regroup to return to our launch point. It was clear that some of us were struggling in the conditions, but a few minutes of paddling got us around the point and into calmer waters.
While the lesson might have left something to be desired because of the conditions, the experience of being out in it was terrific. This was easily some of the worse stuff Louise and I have ever been out in, and the confidence and experience gained is immeasurable. (Gary and Gary also realized that the lesson was less than ideal because of the conditions and will provide an opportunity for everyone to retake the course. And we met some prospective future paddling partners, too.) 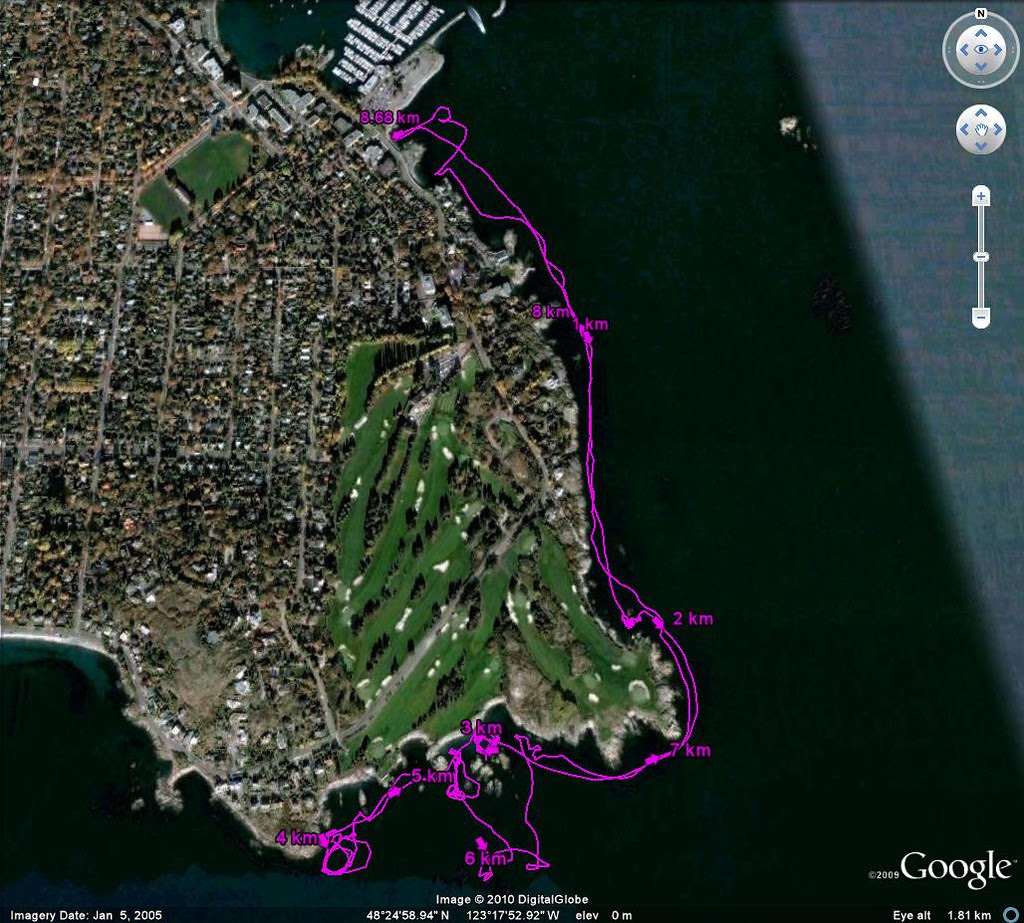