Ah, Cadboro Bay. The Bay is a gorgeous place, very protected, and looking out on a view that takes a backseat to no other. 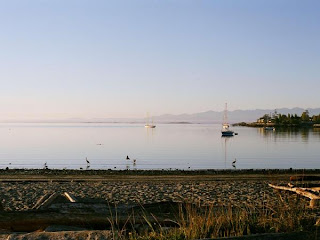 I took this shot of the Bay back in late September, trying to catch the morning light coming over Ten Mile Point. The Chain Islets are visible in the middle distance, as are the Olympic Mountains over in Washington State (I find it amusing that while the border is officially the 49th parallel, only four of eleven provincial capitals lie north of the 49th. Here on the Island, you don’t hit the border until Ladysmith).
Cadboro Bay is nestled on the east side of the lower tip of Vancouver Island, making it one of the safest and most sheltered bays around. Victoria itself is in a rain shadow from the Olympic Mountains, and then Cadboro is further sheltered by hills to the south and Ten Mile Point to the north.
But as the last month has proven (over and over again), even Cadboro Bay isn’t always as placid as it appears in the photo. We’ve been hit by a month-long series of storms that have lead to record or near record amounts of precipitation, power outages, and more than a million people under a week-long boil-water advisory.
Locally, the phenomenon is referred to as the “Pineapple Express”, which happens when warm, moisture-heavy air from the south Pacific meets an Arctic cold front running down the coast before heading over the mountains into Alberta. The result is amazing amounts of precipitation usually over a very short period of time. This time it was a sequence of storms slamming into the coast, bringing rain, winds over 100 kph, and this last week, snow. And then snow again.
While we went without power for several hours, people living near us went without for over two days. With temperatures below zero and windchill adding another -10C, this situation was nothing to be laughed at.
The first storm of the month saw this: 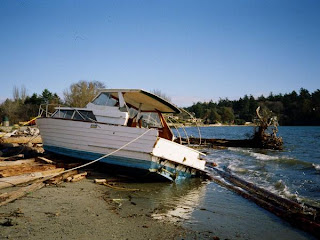 From all appearances, this boat had been in use right up until the storm. But it hadn’t been moored in Caddy Bay–this is just where it washed up. Locals were very polite; they waited two full weeks before stripping everything of value out of the hull. By that point, what had been a damaged but repairable hull, had become a serious mess. The sequence of storms, high tides, and storm-driven tide surge had shoved the hull up and into the stacks of driftwood on the beach. Then the new driftwood–logs ranging from 30 cm across and three metres long up to, well, the drowned tree resting next to the boat in the picture–had broken out the stern and punched new holes in the side of the hull. By the 20th of November, city workers had come by and hauled the hull off the beach.
But this wasn’t all…. 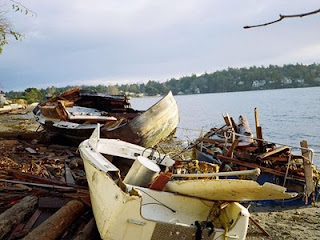 Three more boats had been torn loose from their moorings and tossed up on the beach. By the time I took this photo, the power boat and day-sailer had been filled with driftwood to keep them planted. But the big hull, the 10 metre one, well, that was another story.
The damage this boat had taken was extraordinary. It too seems to have been in use up until the storm that tore it apart. I walked down the beach to it the other day–less than three weeks after it washed up–and the hull is now in two pieces and shredded. The blue day-sailer was hauled back out to its mooring in the bay (of the three boats, this is the only one I’ve seen moored in the bay), but has since been pulled loose again and is nearly back on the beach for a second go-round. The power-boat has since disappeared–I suspect that Saanich hauled it away as well.
Even further down the beach was this: 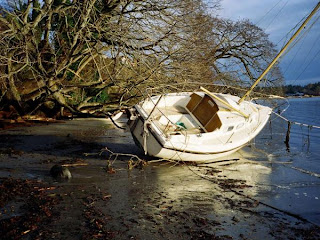 This was one of the boats moored in the bay. It had simply torn loose and been beached. Fairly soon after taking this photo, this boat had been taken off the beach and re-moored–hopefully more securely.
So, in total there were five boats washed ashore during the first two storms of the month. Since then there has been a third storm and the snow. Quite the month. But, it appears, not unique. Under the tree near this last boat, is this hull. Obviously it’s been there a while. :) 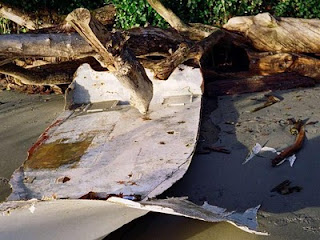