Sunday evening found us in the Crystal pool here in Victoria. Pacifica has six spots a week for people who what a chance to practice in super safe conditions, and this week it was us.
we made a point of being upside down a lot: For example, this is me, upside down before my wet exit and attempted solo recovery. 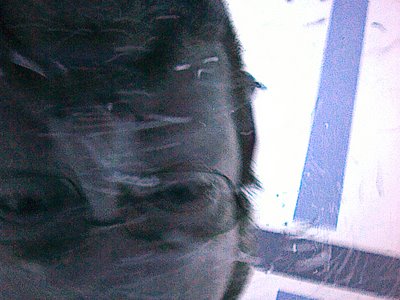 The picture-taking went better than the recovery. Last summer when we sunk the Pamlico 100 it was in its stock condition: The hull was completely open with only two small pieces of foam in the bow ands stern to add flotation. I don't think the coaming actually broke the surface of the water when the boat was filled. Thankfully we were 7 metres off the beach when we did this, and could simply pull it in and empty it.
Knowing this, I've tried to provide better floatation and safety rigging. Finally Sikaflex was recommended to me and seems to have satisfactorily sealed a 100 mm bulkhead into place behind the seat in the Pam. 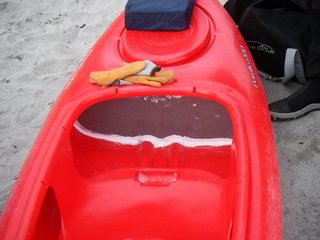 Next I added a rear hatch cover (not originally installed on the boat, I had to order it in), straps to hold it on under stressful circumstances, and a perimeter line around the back. The current models of the Pamlico 100 have the hatch cover installed, but there is no bulkhead, so the cover is really pointless. 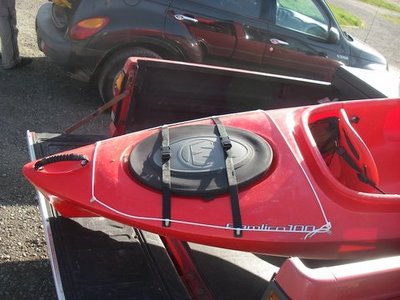 There is only minimal space in the front of the boat, making the Pamlico now do a "Cleopatra's Needle" if I fill it with water. The normal solution is to add a flotation bag to the stern and /or bow. But the Pam's carry handles are held on with large sharp screws--that normally terminate inside the chunks of foam used as floatation. So rather than drop serious coin on a bag, I thought I'd try something a bit cheaper--a can of Great Stuff expanding polyurethane foam. I sprayed it into the bow and let it set up. If it fails to do the job, no big. As the boat is poly, the foam will peel right off. 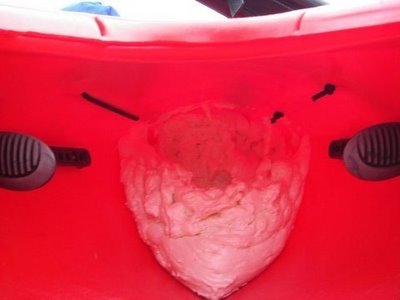 Apparently it would have been better if I stood the boat on its nose while the foam hardened, but heck, this is all experimental at the moment....
The deck line is essential for holding onto when trying to re-enter the boat. Or, as I worked out, for tucking the paddle under when I used the paddle float to create an outrigger to help stabilize the Pam while I tried to get back in. Turns out for a solo recovery the phrase "scramble recovery" is pretty much exactly correct. And if you blow the re-entry, you're toast. Or a bloated corpse being nibbled by crabs...because if the boat does fill up with water, there is no way you can empty enough of it out to avoid the "Cleopatra's Needle" effect. I doubt, though still have to try, that even a float bag will help. The problem is, I think, implicit in the design of the boat; there just isn't enough space forward of the cockpit to fill with floatation to overcome the weight of the water in the cockpit.
The Pam is a stable boat, though. At 30" wide (762 millimetres) with a very flat broad bottom, the Pamlico has a very high initial stability--even though the seat bottom is a bit higher off the deck than I might like....
Paula, in her Old Town Adventure XL 125, also had a lot of fun being upside down.... 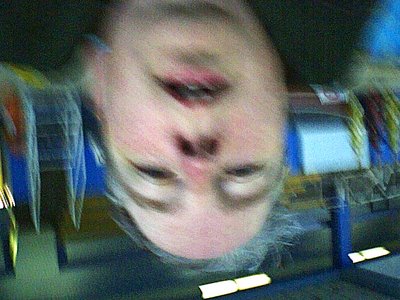 John was having an upside-down good time too. 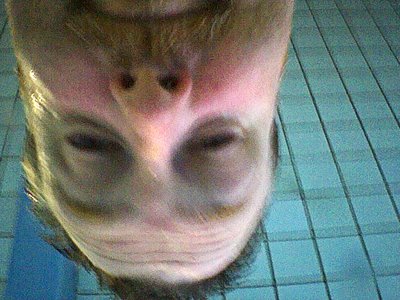 And although the pictures suck, Dennis had to show off that not only can he dump his boat and get back in a dozen different ways with no trouble, but his Advancedframe kayak (model AE1012-R) is stable enough that he can stand up in it too. 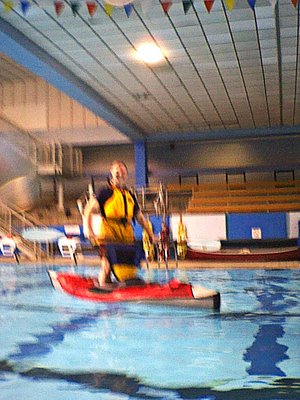 And Louise just generally had a good time with her new boat getting tired and sore. 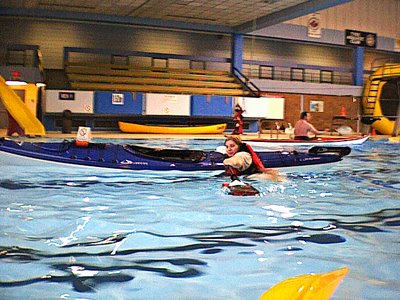 All in all, a terrific evening that showed us we really don't know as much as we think we do. But we're learning fast.
Posted by Bernie at 4:45 pm