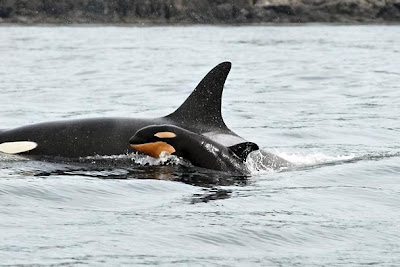 L-pod, one of the three local groups of orcas, welcomed a new addition this week, L111. The mother, 34 year-old L47, and baby appear to be doing fine, but due to high infant mortality rates among local orcas, the newcomer won't be officially counted until it survives for a year. The current estimate is that the three local pods have 87 members of the endangered species.
The picture was taken by Dave Ellifrit and shows the baby just hours old. More of Dave's pictures can be seen at The Center for Whale Research.
Posted by John at 7:47 pm

Email ThisBlogThis!Share to TwitterShare to FacebookShare to Pinterest
Labels: orcas