In June, I went for a marvelous  paddle, though a short one in the estuary of Muir Creek.

This was a good day to pull the little inflatable kayak out of our van and set it up on the creek bank. There was very little current as the creek nears the ocean, and I drifted about happily crossing from side to side or going upstream without any effort till a few dozen yards above the bridge it was too shallow to go further. The water is low from June to September, but I hear there is much more run-off in rainy months from November to March. I drifted downstream into the brackish, swampy part of the estuary. The other half of the estuary was open to the sea. Linking the two parts was a place that at high tide would be fine for paddling, but I was there at low tide. The link was a pebbly mini-rapid too shallow for even my boat. So I contented myself with exploring this side of the estuary and watching bubbles of swamp gas rise from the muddy bottom. 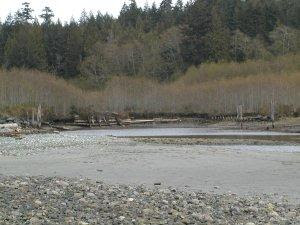 I can see why artist Jeffrey J. Boron has made a painting of Muir Creek. This place is a good one for a short outing in a sheltered space! It would be even better at high tide. If you click on this link, you can see the location along the shore west of Sooke and east of Sandringham Point. Just after West Coast Road crosses Muir Creek, there's a place to pull off the road and park. Room for half a dozen cars, maybe, but no improvements like you'd expect at a park. That's because it isn't an official park; it's just been treated like one by the local residents and visitors. There's a terrific website about Muir Creek and the many good reasons to make this site a park.

While I was paddling, Bernie went the route marked on this website as he walked along the footpath to the ocean shore and then east on the cobble beach to look for fossils. He found some, of course, from the Sooke formation!

A couple of days later in June, Karl and Stephanie went to Muir Creek  with their dog Isaac. Karl took this video, which he posted on YouTube as part of his series on Great BC Beaches. It looks like the tide was high during their visit.

Posted by Paula Johanson at 3:02 am