Late afternoon on the 29th saw the formation of funnel clouds over parts of southern Ontario—particularly near the bits I'm in. So weather was a distinct concern on the 30th as I headed down to Queen's Quay.
Making my way from my sister's house in Mississauga to the waterfront was a matter of some concern. I found my way to the GO train, and thankfully the end of the line at Union Station was my destination.
I had found Harbourfront Canoe and Kayak Centre (283A Queens Quay West 800.960.8868) two days earlier while in downtown Toronto with my sister. “Just head down Blue Jay Way” worked until it didn't. The Centre was a bit difficult to find, but I finally spotted the racks of kayaks and canoes and the office—set at 90° to the road and facing out towards the water. Thankfully there was a sandwich board on the sidewalk. The secret is to find the south side of Skydome (next to the CN Tower) and head south on Rees Street. It would have been easier had MEC not been out of brochures; there is a nice clear map inside that would have saved me a bit of walking.
The staff at Harbourfront were both welcoming and accommodating. Apparently I talked the talk sufficiently well that there was no concern about letting me reserve a kayak for the 30th. I was warned that weekdays during July and August were generally given over to lessons—meaning that access to a kayak during those times was almost impossible. So I took the next available day before lessons started—the Friday—and arranged to show up about 10 am when they opened.
I was a few minutes late—had to check out the pictures John sent out of the safety evening at Elk Lake. I admit there was a big part of me that would have been willing to give up this trip in order to have been there. But the day had come up sunny and mostly clear and I was looking forward to paddling.
The strangest part of the day was getting ready to hit the water. I didn't have my gear bag or my kayak, which was weird. But I was paddling a Wilderness Systems Tempest 170 using a SeaQuel 230cm paddle. 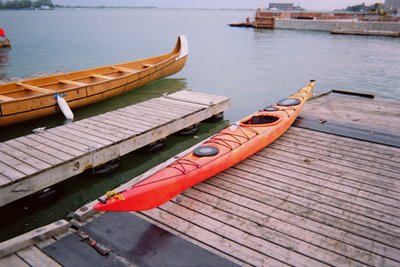 The only thing that this boat had in common with my Pamlico was that it too was rotomolded plastic. The Tempest is about 22” wide with a 15” cockpit, making the fit very snug indeed. Soft-chined, the boat is very responsive to shifts in weight (okay, tippy. Or lower initial stability with higher secondary stability than I am used to paddling. Whichever you prefer....).
But that part that really threw me was the gear. I picked up a new paddling jacket at MEC on Wednesday (on sale! Really, really on sale! And it fits over my PFD. Honest, I'm not a compulsive gear-head.), so I brought that along. But I was sent out with nothing more than a chunk of rope tossed in the cockpit, a paddle float and a pump. Oh, and a cheap life jacket. After a winter of paddling on the West Coast, this was the biggest difference. No dunk bag, no hypothermia kit, no charts of the area, no tide or current tables, no throw bag. I felt naked setting out. It didn't help that the map I had of the Islands was printed on a place-mat. Seriously. And it was helpful! But as a newbie in the area I admit I felt woefully unprepared.
Of course, I really didn't have to worry. The trip across the harbour took about ten minutes and the rest of the trip was in shallow close-sheltered waters. 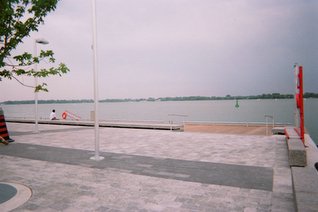 The islands from the launching point
The Islands are very close together—closer even than Chatham and Discovery Islands. Many of the channels are bridged so people can walk from island to island. One end of the group is mostly very expensive boats moored and a clothing optional beach, while the other is a Cony Island; lots of amusements and stands designed to separate you from your cash. Thankfully I had locked up my wallet back at Harbourfront (and I must say that the lockers are an excellent idea!), so it was easy to resist temptation. You can, it seems, rent boats at a couple of locations on the islands, and save yourself the paddle over by taking the ferry. As the following picture shows, I may have made a mistake by renting the kayak at Harbourfront; 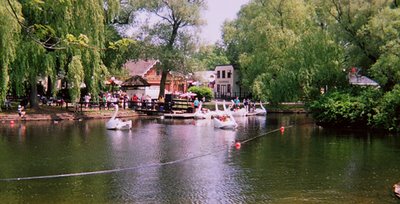 Paddling around the islands was relaxed, although you have to constantly be on watch for tour boats, large powered craft, and zodiacs. 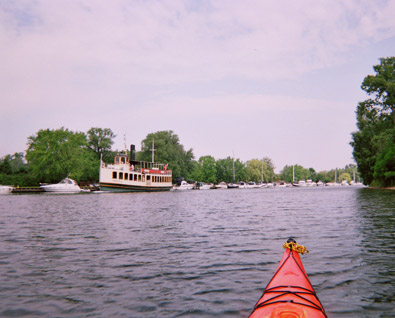 There are a large number of different birds in the islands—one island is reserved as a bird sanctuary—but it took taking a very shallow side channel into a small protected bit of water to indulge my fish-watching pastime. Shallow drafts are cool! 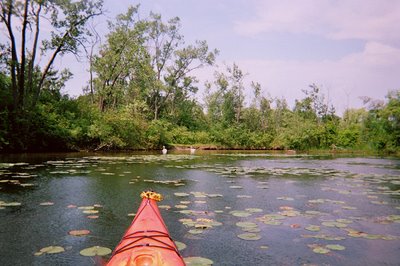 Swans and I in smallish pond

I also spotted a muskrat (at least it gave every appearance of being a muskrat) early on in one of the channels. I could only see this small brown head swimming strongly through the water. When I was almost on top of him, he gave a graceful little dive and disappeared. For those of you who haven’t seen a muskrat, think otter, only about 40 to 50 centimetres long instead of a metre plus.
I beached my boat and sat at a picnic table for lunch and then wandered about on foot for a while. I walked across Ward Island and had a look out at Lake Ontario. This was the moment that reminded me most of the coast; the water went on forever until, over the horizon, it finally ended in a foreign country. Okay, on the coast that's Japan, and here it's the States, but the water going on to the end of sight was enough to make me a bit homesick. 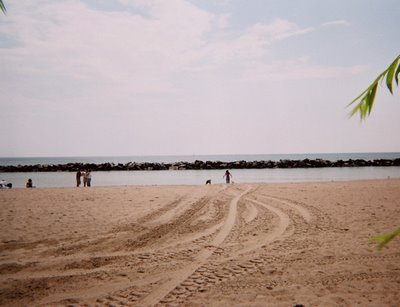 It was the Friday before the beginning of the long weekend, so the Islands were quite busy. And not just with families walking about getting an early start on the weekend; obviously there were a number of events planned for the weekend. And I figure that some of those events involved both kayaks and racing shells. 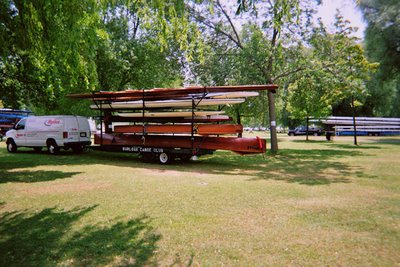 Four-seat strip kayak and some other boats...

The wind had been appearing and disappearing all the while I was in the Islands; and just like when biking, it seemed to always be in front of me. 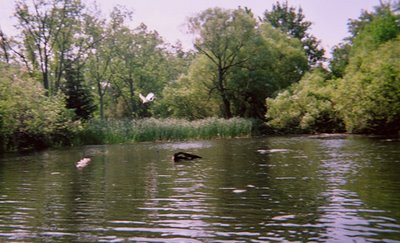 Looking down one of the smaller channels

Often strong enough to make me feather my paddle to make life easier, it suddenly blew up hard and cold. I looked out to the west and saw a large storm front making its way eastward towards me. Mindful of the weather the previous day (particularly of the funnel clouds), I put my head down and headed back over to the crossing at the western channel. 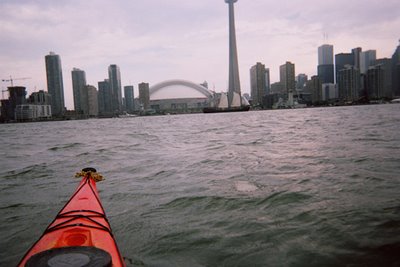 Now, for the first time all day, I could feel the paddling in my muscles; I was paddling into some sloppy chop and a strong headwind from Olympic Island back to Muggs Island and then back to the mainland. Not a really long paddle, but finally giving me something to do. But I ran into someone on the way back—almost actually ran into. This big fellow refused to move out of the way even when I was right on top of him and paddling hard. I took this shot very quickly from about two metres away.

I know that the saying is that the louder Bernie laughs, the more trouble you're in, but I gotta say that while I may have smiled on the way back, I don't think I so much as chuckled. But strange for there to be no salt taste in the spray off the bow....
I spent about three hours in the boat, and have to say that I had an enjoyable paddle. It was a very civilized, very urban experience—very unlike any ocean paddle around Victoria. Much more like Thetis Lake than Island View Beach. But, like Thetis Lake, it was a fun paddle.
By the way, the current prices at Harbourfront are $20/hr, $50/day for a single and $30/hr and $65/day for a double, and there is a frequent paddler card that can drop these prices a bit. There is also a social paddle with BBQ on Wednesday, Thursday, and Friday nights during the summer that sounds like a lot of fun.
Across the street from Harbourfront Canoe and Kayak Centre is The Nautical Mind: Marine Booksellers and Chart Agents , an amazing store that packs a ferocious amount of info into very few square feet of space. Most of what is stocked is intended for sail- and power- boaters, but there is quite a bit of info that's good for the kayaker as well. I ended up talking to another browser in the store who turned out to be Steve Killing—who currently designs both kayaks and strip canoes for Bear Mountain Boats, which is owned by Canadian canoeing legend Ted Moores. Somehow this is typical. The last time I was in Toronto, I ended up talking to a guy who had just helped authenticate a lost Reubens painting. There are things I really love about this city! (Not the least of which is that on July 8th, the first show ever curated by David Cronenberg opens at the AGO; Andy Warhol/Supernova: Stars, Deaths and Disasters 1962. Woohoo!).
Posted by Bernie at 10:32 am