Paddle to the Amazon 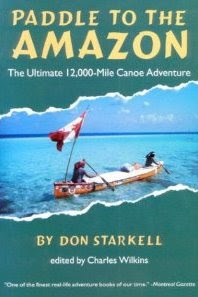 In June of 1980, Don Starkell and his teenaged-son Dana embarked on an adventure they had been planning for years: to canoe from Winnipeg, in the middle of the Canadian prairie, to the mouth of the Amazon River in Brazil. Even after finishing Don's book, it still sounds like a crazy idea. Paddle the Red River upstream from Winnipeg, portage to the Mississippi River system, down the Mississippi into the Gulf of Mexico, around the Gulf and down the coast of Central and south America, then up the Orinoco River into the heart of Venezuela, then back down the Rio Negro and the Amazon to the sea.
2 years. 12,000 miles. 20,000,000 paddle strokes.
Yet somehow, they pulled it off. Between the arduous paddling, the over-zealous soldiers and policía, terrible weather, and bouts of near-starvation and intestinal upsets, Don and Dana somehow survive, not always because of Don's skill as an expedition leader (or some may say lack thereof), but often only thanks to the kindness and generosity of some of the poorest people on the planet.
Don's diary is a classic story of adventure and survival against insane odds. Well worth checking out.