Raccoon Tracks On My Kayak

There are raccoon tracks on my kayak!
All right. I know that it's just lazy of me to stuff my inflatable kayak on top of my big upright tricycle in the porch, instead of drying it out and folding it up each time I use it. But hey, I like needing only 1 minute to puff it from 85% inflated to full. That saves me nearly ten minutes of preparation time! When I'm getting on the water two or three times a week in it, that adds up. Well, with the 'flu sidelining me this fall, I've only been on the water three times in the past five weeks. So the inflatable had been tucked away for a while, and now I've pulled it out again, used it and stuffed it back in the porch. That means it's ready to go!
It also means that the kayak spends time where various aspects of Nature have an influence on it. Sunshine can fall on one end unless I stuff the boat pretty far into the hedge. Dew falls on the kayak, but if it's lying upside down that keeps some of the dew off my trike. Leaves blow into the porch, and on a rainy day the leaves stick to the kayak.
I'll get to the raccoon tracks in a minute. In the meantime, take note: Don't leave leaves on your kayak. They leave stains. Especially if the leaves are wet with rain. There are leafy stains on most of my kayaks.
Now, I'm not really complaining. No one who can use the phrase "most of my kayaks" in any capacity at all should ever be complaining about little things like having brown-coloured stains on any number of the kayaks, or even most of them. The willow and maple leaves that are most likely to fall on my kayaks or get tangled in the tarps don't seem to make permanent stains on the hardshell kayaks if the leaves stay on the boat surface only a week or two. A little sunshine seems to bleach the stain out of the rotomolded plastic, or the yellow marine paint. The inflatables are more likely to hang onto a stain. But well, these aren't museum exhibits -- they're kayaks for using and enjoying out in the wide world, and a few scratches or leaf stains are features, not flaws.
That's what I thought I saw on the grey rubbery underside of the kayak hull, when I went to take the boat out on the water: leaf stains. Looking a little closer, I saw that the brown marks were not random little curving stains, but regular muddy smudges. Little hand-prints with long finger shapes. Somebody with four neat little hand-paws had been walking across my kayak!
I dunno what kind of neighbours YOU have where you live. But our neighbours are an assortment of mink, squirrels, river otters in the bay, and a raccoon on the prowl. That darned raccoon has been walking through the porch every couple of days. He's looking to see if we put any cat food outside the door for the fluffy cat who seems to have adopted the house. I sent up an earnest hope that the raccoon wouldn't take to chewing on my paddle gear for the salt, and went paddling. The footprints were still there when I took the boat out of the water... even hosing down the kayak didn't get rid of them. It took real rubbing with a cloth to remove the marks. The fluffy cat (Bernie calls her H. R. Flufnstuf) wandered over to take a look. Here's a photo that John took of the cat the other day, with some kayaks behind her. 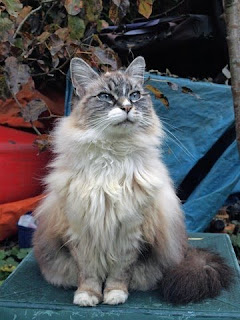 This looked like a good opportunity to dry the kayak well, inside and out, before folding it up in its bag so maybe I could take it on the bus some day soon. Bernie brought the inflatable inside for me, and stood it up inside the back door in the laundry/furnace room. The boat was drying out nicely in that warm room, when our landlady's new rescued dog stopped on his way to the back yard and... grrr... peed all over the stern. Grr! First the raccoon and now the dog. I'd better watch out in case the fluffy cat takes a notion to poke the inflatable with those sharp claws...
Posted by paula at 11:06 pm

Email ThisBlogThis!Share to TwitterShare to FacebookShare to Pinterest
Labels: Victoria